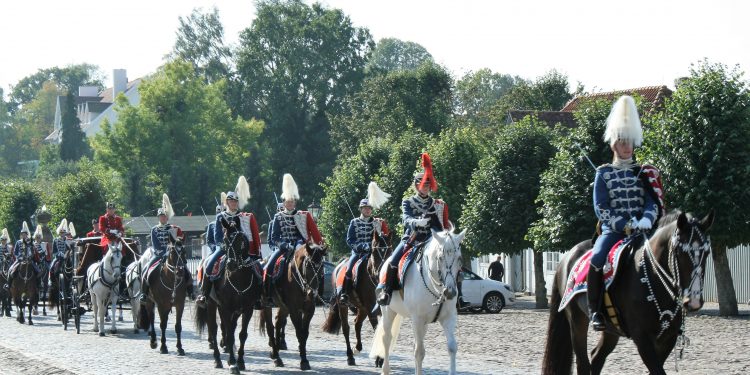 The official reception of a foreign ambassador is a very formal event and an ancient tradition. Next one is at Fredenborg Castle on 13 October.

Find all the details below.

This very old tradition is maintained in the best form possible while taking into account the cost of moving around horses and soldiers from the Royal Mounted Guard Hussar Regiment who are stationed in Slagelse.

It is an event not to be missed while you reside in Denmark.

It takes place a couple of times a year, depending on the amount of diplomatic changes, and entails the transport of a new ambassador by one of the Royal Stable’s horse-drawn carriages, escorted by members of the Royal Mounted Guard Hussar Regiment.

The ambassador is taken to meet the Queen at the castle where she lives, during the winter, she is most often at Amalienborg from December until April, and at Fredensborg from April to November.

This event will be at Fredensborg Castle, as the Queen is in residence there at the moment.

Due to the cost, and practicality of transporting horses and carriages from Slagelse to Copenhagen, the Queen bundles her reception and usually receives several at a time.

Find out how to participate below.

The main event takes place Wednesday 13th October when the Queen receives them at Fredensborg Castle. The ambassadors are taken from the train station at Fredenborg and along a short ride to Fredensborg Amalienborg.

They will start at around 09.40 from Fredensborg Train Station and ride to Fredensborg Castle with the first ambassador who is to arrive at exactly 10:00 at the castle where he is received and taken to meet the queen.

It is a beautiful event and there are plenty of opportunities to get a good view of the magnificent parade of horses, traditional uniforms and the horse carriage along the route.

The escort and horse carriage will go back and forth five times until the last ambassador departs at 11:30 with the escort from Kastellet to arrive at 12:00 at Fredenborg Castle.

The public can get quite close to the event and route, a fun event to watch. At the end of the ceremony,  the ambassadors are picked up by their cars, each  meeting with the Queen takes about 30 minutes.

For this event the full regiment (up to 45 horses) do not participate.

However, a total of at least 20 horses and guard hussars from the mounted regiment and a carriage from the Royal Stables participate in it.

You can watch it from anywhere along the route.

If you are able to take the day off, or plan it in at least once while you stay in Denmark, it really is a spectacle worth seeing.

More information and pictures below.

The horses and hussars will arrive at Fredensborg  two days before, this is their “horse hotel” while in Fredensborg.

A practice ride will take place on Tuesday 12 October at around 13:00.

When the event takes plac in Copenhagen the mounted regiment stays at the Royal Stables – which used to be home to more than 100 horses.

The horses are immaculately maintained and very well behaved as you can see in the pictures below from inside of the Royal Stables at Christiansborg.

Find below a photo report from a past occasion when all 45 horses were at the stables at Christiansborg Castle and were preparing for the rehearsal ride of the Golden Coach Tour. Pictures courtesy of Christian Lindgren.

Are you new to Denmark? Or just still puzzled about how everything works? We give you here a brief introduction to how the system works. …