Teaching Vikings the importance of manners and how to behave 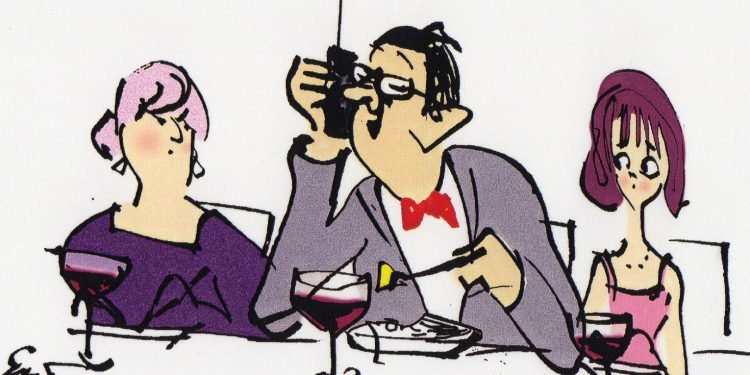 Understanding the importance of a person's manner and behavior was made easier through caricatures and funny drawings. Picture: Inge Correll/ Eric Werner

In Denmark, the importance of learning the dos and don’ts of good manners was for many years perceived as something rather controversial, archaic and really old-fashioned. Find here the story of what it was like to teach them “how to behave” again.

Since the 1970s, old-fashioned things such as how to sit properly at a table, how to hold your fork and knife, dress codes, and learning how to address fellow guests at receptions and dinner parties has not been part of Danes’ standard education.

This was all the result of the so-called 1968 generation who had discarded the rules of society and the formal ways of behaving and actually put honour in “misbehaving”.

After the largest royal event since 1967, the Danish Queen’s silver wedding in 1992, there was a renewed interest in learning more about “good manners” and how to behave in different social settings.

For more than a quarter of a century, Inge Correl, the icon of good manners (in Danish takt og tone), has helped businesses, employees and students ensure that they make a good impression in any social or cultural setting.

The idea to start doing so wasn’t her own.

Inge Correll had for many years worked in different internationally-oriented companies, amongst others for the Scandinavian airline company SAS where she was head of the Danish and Japanese stewardesses.

She had just started her own hotel and conference centre when she was contacted by the Director of the Danish Export School asking her to teach his students good manners.

She wasn’t quite sure how to respond, however, good friends and family told her to give it a chance and thus she embarked on a 25-year-long career as the Danish good manners expert, holding courses for new managers at A.P. Møller (Maersk) as well as for export and sales personnel at Carlsberg’s international department and many many other Danish export oriented businesses.

“I think it helped me a great deal that there were so many celebrations and events in the Danish Royal Family during my first years with the celebration of the Queen and Prince Henrik’s silver wedding anniversary back in 1992, as well as the first royal wedding since 1967 ( the year Queen Margrethe and Prince Henrik were wed) when Prince Joachim and his first wife Alexandra were married in 1995.

All this was transmitted live on TV and I was asked to comment. All of a sudden there was  a new interest amongst Danes to learn more about manners and proper behaviour in different social settings,” Inge explains.

“When I started in the beginning of the 1990s more Danes were travelling and businesses were expanding internationally. The need to understand how to behave in different social settings and also in other cultural settings was only beginning to be accepted.

At the time, whenever I came to an international conference or reception, I could always tell whom the Danes were,” Inge laughs as she goes back in time.

“I just had to look for the worst dressed group, who had all supplied themselves with ample food and drink, and then found a corner to sit and chat with the other Danish participants,most of whom they knew already, rather than mingle and make new acquaintances.”

As her courses were easy targets for ridicule, she decided to use humour in her presentations, trying to make people understand through caricatures and funny drawings.

Below you can find one of them, showing a small group of business men, two of them looking very professional and smart in their attire; the third one with a very dominant tie, a bad haircut and white tennis socks sticking out of trousers that are too short. “Can you find the Dane?”, she asks retorically during her courses. 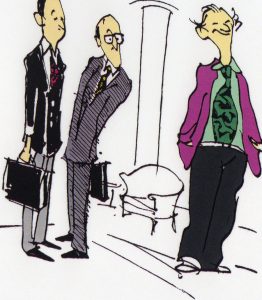 “This one helps illustrate the image you are conveying to other people with your appearance. Will they find that you are a professional and able business partner when the personal image you convey is one of a sloppy person?” she asks.

Inge believes that the attitude towards learning manners and how to behave in different settings all changed with increasing globalisation, the internet and social media.

She finds that Danes have improved the way they behave and that, due to their many travels and more global outlook, they are better able to understand the importance of ” good manners” and how they behave.

So what are “good” manners? Is it all about how you hold your fork and knife?

Inge laughs at the question. She has probably been asked that a lot.

“No,” she says. “It’s really about how you behave towards other people, the respect and attention you pay them when you meet socially or in a business context. And I think that is something Danes at the time (back in the 80s and 90s) didn’t think so much about.

When you are at a business dinner, or a reception, it is a great opportunity to learn more about the people you are dealing with, their country or culture, so why on earth only talk about yourself, your career, the weather, and football?”

In fact she always teaches her students to avoid these four subjects.

What to do instead? She says:

“Ask questions, show an interest in the people you meet, their lives and culture. You might learn something new and at the same time be able to convey something about your own cultural background for their benefit.”

Inge Correll has published two books with all her tips and insights. In one of them she gives a funny example as to what is the correct time to leave a business dinner:

“Of course it may vary but if it is on a weekday, with a busy working day the next day, guests should leave no later than 23:00, and if you do not know the local cultural and social codes it can go quite wrong she says to underline her point.

“A former American ambassador was asked to a dinner party at a manor house on Funen. Arriving there, he told his chauffeur they would be leaving around 22:30. The clock struck midnight but none of the guests were leaving and as time passed, the Ambassador got worried.

He had an important business trip the next day was concerned that he would not be fit for it as the dinner party dragged on into the early morning.

Eventually he discreetly approached the hostess, explaining he was really sorry, but he had to leave, only to be met by the response;“Thank goodness! That is no problem at all. We were all waiting for you to leave – first”.

As he was the most important person there, and the guest of honour, he was expected to leave first (according to Danish etiquette).

The story was related to Inge Correll by the Ambassador who ultimately asked her to teach his embassy staff about the Danish way. 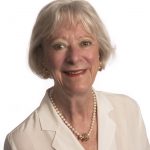 Inge Correll has a long career working for SAS and the five star hotel on Kongens Nytorv in Copenhagen Hotel D’Angleterre, the SBM hotels in Monaco (Hotel de Paris, Hermitage).

She ran the hotel and conference centre, Havreholm Slot, for 25 years.

In 2000 she was awarded the international prize “Leading Woman Entrepreneur of the World”.

She has retired from the hotel business but is still an active woman.