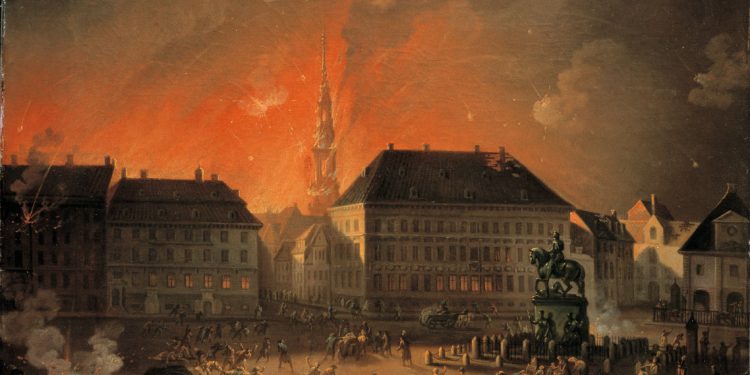 Copenhagen burns after being bombed by the British. Picture: SMK PR

Visit the national gallery in Copenhagen, Statens Museum for Kunst (SMK), as it stages the largest exhibition of Danish Golden Age paintings ever seen.

Discover one of the most creative periods in Danish Art and Culture showcased in SMK’s charismatic framework as you walk on floors decorated with soft golden carpets.

SMK’s exhibition of world-class painters is shown in a highly innovative mix of entertainment and classic museum tour.

Danes in the Golden Age days, we are talking the period 1807 to 1864, surely struggled with their share of dirt and debris. But this period also brought about some of the most impressive painters.

SMK welcomes visitors with 228 works of art – the largest Golden Age exhibition ever in Denmark.

Background of The Danish Golden Age
Denmark was afflicted by war, racked by fire and national bankruptcy.

England bombed Copenhagen. Germans slaughtered Danes at the battlefield. It was far from happy times. But cultural life exploded, and nationalism arose.

Maybe they felt the need for romanticising life with beautiful strokes and a large scale of awesome colours to cope with all the disasters?

And it was not for everyone to be invited into the inner circle of honoured painters. Some got in. Others got the kick and were left out in the cold.

Closeness to the German artschools was no longer accepted.

The exhibition is an open window into Danish traditions, history, the beauty and forces of the Danish nature, simple living and everything closely related and nearby. Motifs of kids and black people were new.

Major themes in European Romanticism
Romanticism was closely bound up with the awakening nationalism in most European countries in the 19th century.

Painters tended to combine an ideal vision with what was particular to their own country.

These were the heydays for British painters like J.Constable and W.Turner, and the acclaimed German landscape painter David C. Friedric,  who had studied at the Royale Danish Academy of Art, Copenhagen.

The Danish painter J.Th. Lundbye wanted to paint Danish landscapes that were just as impressive as those the Romantic painters did abroad, with motifs of steep cliffs and showing strong forces of nature.

In one painting, A Danish Coast, the attentive viewer will find how his easel got a little too excited compared to the original size of the actual coastline!

Like Christen Købke, he wanted to paint and convey the deeply felt patriotism and love for the country he was born in.

In 1838, Christen Købke painted a piece with the Danish flag, Dannebrog, flying. At this time, private use of the national flag was prohibited. The flag symbolised state and power, and was only to be used by the king and the Royal Navy.

Despite the ban, people broke the rule and soon began decorating their Christmas trees with garlands of Dannebrog flags. A new tradition was born.

At the time, the majority of painters were male. But Elisabeth J. Bauman is one out of seven unique women to be admired. In 1867 her paintings were shown in France at the World Fair.

This autumn’s exhibition is a magnificent challenge to identify parallels between the golden days with modern life. And a great opportunity to look for themes that everyone can relate to.

What are the present big discussions? Nature, the climate, nationalism or gender?

You’ll find them all also in The Danish Golden Age.

Not able to go to the exhibition in Copenhagen? Don’t worry. The Danish Golden Age exhibition is on tour and will also come to Paris at Petit Palais in 2020.

Runs in Copenhagen until 8 December 2019
More information at www.smk.dk