What do the Danes think of their Royal Family and what role does the Danish Monarchy have? 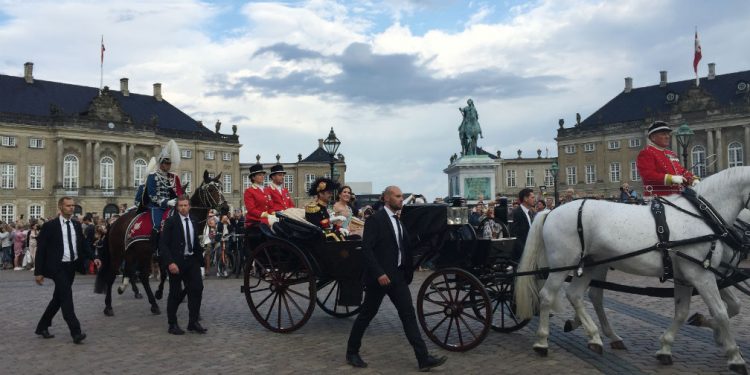 Royal events often take place by horse carriage as the ride from Amalienborg to Christiansborg during the celebration of Crown Prince Frederik's 50th birthday in 2018. Picture. Bente D. Knudsen

You cannot stay long in Denmark without noticing the importance of the royal family. But who are they and what role do they have in a modern democracy?

Countless public events are marked with a royal presence and the Danish flag, Dannebrog, is flown on numerous occasions to celebrate the royals’ birthdays.

Also, the massive rally in support of the royal family after the illness and decease of Prince Henrik in February 2018 was a vast testament to the support the Danes have for their monarchy.

What does the Queen actually do?

Being a constitutional monarch means that Queen Margrethe cannot independently perform political acts. Although she signs all Acts of Parliament, these only come into force when they have been countersigned by a Cabinet Minister.

As the Queen is the formal Head of Government, she presides over the State Council where acts passed by the parliament are signed and officially become new laws.

This ceremony is performed according to the old tradition of a horse carriage ride to meet the Queen escorted by the mounted Guard Hussar regiment.

Does it pay off to have a royal family?

When Queen Margrethe ascended the throne in 1972, only 42 percent of Danes were in favour of keeping a monarchy. Over the years the support has steadily risen. A rise much attributed to the way the Queen has fulfilled her role.

She has amongst other things been good at representing Denmark abroad by participating in business trips and exhibition openings in connection with export campaigns for Danish businesses, thus acting as a door opener for Danish commercial interests abroad together with her late husband Prince Henrik.

A role the current Danish crown prince couple are also performing and in recent years they have taken over many public events in an effort to help the Queen with her many duties and to prepare for the day when they will take over.

However, discussions about the cost of an increasing royal family – now with eight royal grandchildren – can be heard.

So far, it has not been possible to calculate the cost-benefit, despite voices heard to try to do so.

The Danish industry association, Dansk Industri, is adamant that the role as door opener abroad greatly benefits Danish exports and that the royal family’s presence in Denmark attracts tourists too.

The cost of having a royal family runs up – and is estimated to be around DKK 343 million, which includes the state contribution to its different members of about DKK 82 million annually.

The only official account of the cost was made in 2009, when Danish Prime Minister Lars Løkke Rasmussen presented this official amount of DKK 343 million.

This official amount includes the DKK 82 million in state contribution, but also includes the related costs that different ministries have as well, such as the Royal Guard, the Royal Castles, State visits, round the clock surveillance by PET ( Politiets Efterretningsvæsen – the Danish “MI5 or Secret Service”), the royal yacht, royal stables etc.

The state contribution of DKK 82 million is used to cover the royal households’ direct cost for staff, clothing, transport, internal maintenance of their castles – heating and electricity and miscellaneous.

When Prince Henrik died in 2018, there were extra costs of the burial as well as the birthday celebration of HRH Prince Frederik, who turned 50 that year, as well as expensive  state visits, such as the visit of the French president. In 2018 the accounts went red and the loss had to be covered by the royal household.

Every year the Royal Household publishes its accounts and everyone can get an insight into how they have used their state contribution.

During corona, savings were made as events were cancelled. What the outcome of the Queen’s Golden Jubilee celebrations in 2022 will be can be found when the accounts are published in 2023.  You can read former accounts here.

With a larger family to finance, Danes expect the royal family members to contribute to their own life support.

In a survey made by Megafon for Danish newspaper Politiken and TV2, it became clear that for instance Prince Joachim’s offspring (four in total) will most likely have to fend for themselves, as 66 percent of Danes agreed with the statement that they should lead a normal working life as adults. When his son Prince Nicolai turned 18, HRH Prince Nicolai did not receive any state contribution.

57 percent found that Prince Joachim’s ex-wife Countess Alexandra should not be on the public payroll, since this survey was made, Countess Alexandra has informed that when her youngest son Prince Felix turns 18, she will decline to receive her annual state contribution.

The discussions reached such a level, that in 2016 the royal house announced that only HRH Prince Christian, who will one day succeed his father Crown Prince Frederik, is the only one of the Crown Prince Couple’s four children who is expected to receive any state contribution when he turns 18.

The other three royal children will depend on their parents and have to earn their own livelihood.

Their roles in the future

No one can, of course, predict what will happen, however, no one believes that the Queen will step down in favour of her 54 year old son, Crown Prince Frederik. In her own response to this, the Queen has often made it clear that as long as she is healthy, and able to perform her duties as a Queen, she will do so.

It would seem that most Danes want to keep their Queen. In a Megafon survey only 18 percent felt the Queen should retire now. However, 73 percent felt certain that her son is qualified to take over the throne.

The next generation of royals will have to find their own balance between keeping up Queen Margrethe’s emphasis on a more open Royal house, being visible and present in their public work, but also finding their own way.

“Frederik has to find his own way, the last thing he should do is to be king the way his mother was queen. He has already shown us more of his personality by running an iron-man and crying in the church at his wedding, so we forgive him for crossing a closed bridge (ed: his car crossed the storm closed Storebælt bridge in order for him to arrive on time at a public event). We are also getting an extremely qualified queen in the shape of Crown Princess Mary. She will be worth her weight in gold and already is.”

A bit of Royal history – Danish Monarchy more than 1,000 years old
Claimed to be one of the oldest monarchies in the world, the Danish one can be traced back to King Gorm the Old (d. 958). The monarchy was originally elective, but in practice, the choice was mostly limited to the eldest son of the reigning monarch.

In return, the king had to sign a Coronation Charter, which regulated the balance of power between himself and his people. In 1660, absolutism was introduced and the elective monarchy was replaced by inherited monarchy.

The succession was based on the principle of male inheritance only, and was laid down in the Lex Regia of 1665. The direct lines of the ancient Danish dynasty became extinct with the death of Christoffer III in 1448.

Instead, Duke Christian of Oldenborg was chosen to be King of Denmark and took the name Christian I. The Oldenborg family belonged to one of the side branches of the original dynasty and was replaced by the Glucksborg branch when in 1863 the last of the Oldenburg’s, Frederik VII, died childless.

Christian IX’s son, Frederik VIII, was 63 years old when he finally became King in 1906. When he died in 1912, he was succeeded by his eldest son, Christian X, who reigned throughout both World Wars.

He is remembered as the “Equestrian King” because of his ride across the old border into the province of North Schleswig after its reunification with Denmark in 1920. The 100 year-anniversary for this event will be celebrated all of 2020, with the main days in July 2020 in Sønderborg.

He became very popular during the German occupation of Denmark between 1940 and 1945 when, every day, he rode through the streets of Copenhagen.

Christian X died in 1947 and was succeeded by his eldest son, Frederik IX, who had married the Swedish princess Ingrid in 1935.

His daughter, Margrethe, is the present Queen Margrethe II.

From Absolute to Constitutional – with the same family
The democratic constitution of 5 June 1849 (hence 5 June is celebrated as Grundlovsdag – the day of the constitution) changed the monarchy’s status from absolute to constitutional but still with only male heritage.

It was not until the mid-1950s that this was changed.

As Queen Margrethe’s father, Frederik IX, only had three daughters, it is believed that pressure was put on the government to allow for female succession.

Rumour has it that the male alternative was not deemed attractive.

For instance, the respected editor in chief of Danish newspaper, Information, recommended his readers vote yes to enable King Frederik’s daughter to inherit the throne.

With a majority vote of 45.76 percent (45 percent was needed) Danes said yes to the Act of Succession of 27 March 1953 finally allowing a female monarch.

It was on this day Queen Margrethe (born in 1940) officially became Crown Princess, and later succeeded her father to the throne in 1972.

In 2009, the Act of Succession was amended, as the text originally said that a son or daughter could inherit, however, a boy would succeed before his sister.

The new amendment allows for the succession of the firstborn whether a boy or girl.

With the birth of Prince Christian, Crown Prince Mary’s and Crown Prince Frederik’s firstborn, it will take some years before the new Act of Succession is ever put in to use.

The Danish royal family does not posses a huge fortune – even if they look wealthy with their castles and classy cars. Find out why in our article here.