A three headed one: Presentation of the new Danish Government 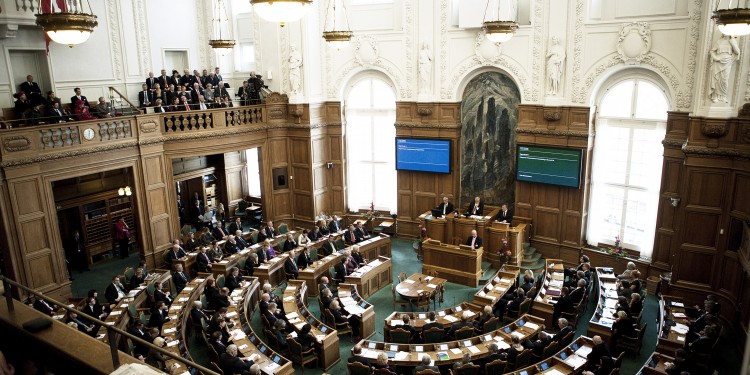 The Danish Parliament, Folketinget,resides at Christiansborg Castle. It will be assembled again as of 15 December 2022 with the new government and parliament members. Picture: Anders Hviid/Folketinget from a former opening ceremony

“Taking responsibility for Denmark” is the title of the new government constellation and the main plan was presented today at a press meeting at Marienborg, the residence of the (acting) Prime Minister.

The longest time ever to form a new government, more than 42 days, culminated today when three happy party leaders presented their plan and program.

Also a historical day, as the new government breaks with the established block politics, the so-called Red block of left-wing parties and Blue block for right-wing parties.

The three party leaders presenting the new government were, Mette Frederiksen, from Socialdemokratiet (traditionally red), Jakob Elleman Jensen, from Venstre (traditionally blue) and former Prime Minister and former member of Venstre, Lars Løkke Rasmussen, from Moderaterne (his new party has not defined itself as being part of the red or blue block structure).

They joked a lot about which colour they were; red, blue, purple or green in the new constellation but also admitted that they were still their original political colour.


However, all three stressed the historical importance they felt of this new constellation, and it was clear that the past many days and hours of negotiations had forged a bond between them, a willingness to make this work.

And work was another word stressed during the meeting.

A sum up of what all three said was that: “Our common ground is to work, we are a working community ( arbejdsfælleskab is the Danish word heard a great deal). We do not agree on everything, we still have our political differences, but we have chosen to work together towards a common goal: to make decisions and reforms to ensure that Denmark is prepared for the future with all the challenges we must face to ensure that Denmark remains (Editor’s note: one of) the best country to live in.”


Important, in this new constellation, is that between them they have a majority of seats, 89 together plus the four so-called North Atlantic votes, which gives them more than the needed 90 for a majority of seats (there are 179 seats in the Danish Parliament).

Another element is also that these three politicians are not newcomers to Danish politics and between them they have a lot of experience.

Lars Løkke Rasmussen used to be the leader of Venstre and Prime Minister prior to Mette Frederiksen who won over him in 2019, and hence he knows Jakob Elleman Jensen very well as he was his former “boss”. All have spent more than 20 years in Danish politics and have been members of their party’s youth section before becoming members of parliament.

Danish politics are traditionally characterised by being consensus seeking. Many political reforms have been made with participants from both the right- and left-wing parties. However, being in government together has not been seen since 1978 when Socialdemokratiet and Venstre formed a short lived government.


All three party leaders underlined that they believe this government will work even if there will be hurdles on the way and that they all agree on the plan worked out under the title: ” Taking responsibility for Denmark”.

Venstre’s leader, Jakob Elleman Jensen, has been under a lot of criticism for joining this government which is not a blue block one.

During the election campaign he ran on forming a blue government with himself as Prime Minister. The party leader of Venstre has always been the party’s Prime Minister candidate.

He explained, when questioned about this during the press meeting, that he had had to climb down from his tree and he did get some bruises on his way, however, he said, he firmly believes that Venstre will get more influence and be able to put a bluer colour on the reforms clearly needed by being part of the talk rather than standing outside.


It became clear during the presentation of the main lines of the government’s plan that important right wing economic policies had been won during the discussion.

Most importantly, the large tax reform which will mean that more than 250,000 Danish taxpayers will no longer have to pay topskat, the 15 percent tax on incomes above DKK 600,000.

For everyone above the new threshold of DKK 750,000, the percentage is 15 percent extra tax until reaching the income of DKK 2,5 million where it is increased to 20 percent on amounts above,  thus increasing the rate by 5 percentage points from the current 15 percent to 20 percent. The really high income groups will thus have to pay more whereas other income groups will see their total tax payment reduced.

The specifics are not that clear in the plan so more details will probably be worked out and announced later with clear calculations by the Ministry of Finance or from SKAT.

Making it more advantageous to work rather than to be unemployed has been a blue policy and by increasing the deductible amount for those working, in Danish called beskæftigelsesfradrag, everyone regardless of income level will get a tax reduction once this is implemented.

The list of areas with reform plans is long: taxes, health, climate, education, the elderly, bureaucracy in the public sector.


In the public sector, the plan is to liberate it; getting those working with children, the sick or the elderly to spend more time with those they care for rather than reporting how they spend their time.

Within the higher educational system at universities and business schools, the two-year master degree system (kandidatuddannelse) is to be reduced from a five year degree (bachelor three + master two) to a four year degree in 50 percent of all degrees.

All three stressed that the reforms will take time. Time to work out, time to talk to those involved outside of parliament, therefore there isn’t a plan yet for when what will be implemented nor exactly what it will look like, hence the need to work as all three stressed.

Main points are that the economic reforms in the plan of the new government will also affect foreigners working in Denmark as it entails changes to the tax system and the amount of bank holidays:


– If you just got used to the particular Danish bank holiday, Store Bededag  (The Great Prayer Day) in the spring, then take note that you will be working that day as of 2024 – without pay compensation. This is a reform which can be implemented directly by law by the new government therefore the plan is that it will be from 2024 to leave time for it to be planned in. This will affect everyone in DK as shops and schools are normally closed as well as offices. Also, there will be no compensation – no other day off or extra pay is the plan.

– Tax reforms will ease topskat for those earning up to 750,00 but there will also be extra tax for the highest income groups above DKK 2,5 million. The new system will make it more expensive tax wise for anyone earning more than DKK  2,5 million compared to the present system. This reform will make it possible for both Venstre and Socialdemokratiet to claim the tax reform is equitable. Whether or not it affects the specialist tax system is not known at present (foreign specialists are taxed at a lower average rate on all of their income during the first seven years of employment in Denmark).

-A larger deductible amount for all who work as the so-called beskæftigelses fradrag will be increased, this reduces taxes for all with a work related income but not those on unemployment or other benefits or on pension. On top of that, working single parents will get an extra tax deduction on income, this enables Socialdemokratiet to claim they are still looking out for those on low incomes and still looking after the welfare of children in the low-income groups.

Just a few highlights of elements affecting all who work and pay taxes in Denmark.

On 15 December, the Danish Government with all ministries and ministers will be presented, however, one thing is certain:

The next Prime Minister will be Mette Frederiksen from Socialdemokratiet.