After the last castrum doloris today, the funeral itself tomorrow will be a quiet ceremony 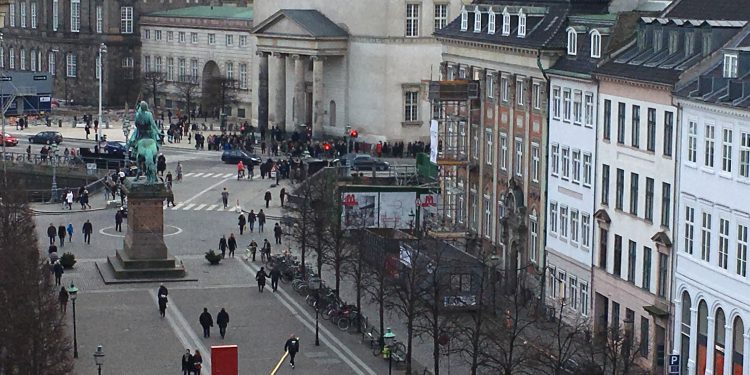 From the top of the department store IIlum you can also view the long line of waiting citizens outside Christiansborg Slotskirke.

Today is the last chance to take leave of HRH Prince Henrik, as the funeral ceremony tomorrow will be a quiet family affair and not a statesmanship funeral.

Many thousands have already passed by the coffin, and those who have been there, are deeply moved by the beautiful ceremony it represents.

A Danish family of three generations stood for almost two hours waiting outside the church Sunday afternoon. The grandmother explains how she had been to the castrum doloris for both Queen Margrethe’ father in 1972 and again for her mother,Queen Ingrid,in 2000. She wanted her young grandson to experience it as well she said.

Visitors are not allowed to stop but must pass by the coffin quietly and no pictures are allowed.

There is a special atmosphere the grandmother explains, and people standing in line start talking and exchanging experiences while they wait.

“I think this goes to show that HRH Prince Henrik was much more respected by the Danish citizens than all those awful media articles actually showed. I hope the royal family can at least rejoice over the extent of how fond “normal” Danes actually were of him,” she adds.

It is an old tradition in the Danish Royal house dating back to 1746.

Normally, castrum doloris takes place a few days before the funeral service in Roskilde Domkirke, since a royal funeral in Denmark is a state affair, with processions through Copenhagen and TV transmission from the event. Not so for Denmark’s French-born Prince Henrik.

There will be no large statesmanship funeral service NOT because he does not deserve it, but simply because his last wishes were to have a private ceremony and not to be buried in Roskilde Domkirke, as is the royal tradition.

Since Prince Henrik does not wish to be buried in Roskilde Domkirke, the coffin will not be transferred there, but instead he has wished to be cremated and have his ashes divided in two to be spread over the Danish seas as well as placed in the private garden at Fredensborg Castle.

Therefore the castrum doloris at Christiansborg Slotskirke is the only opportunity for his friends, his protections and Danes in general to take leave.

Tomorrow the funeral will take place at 11:00, only for the closest family and a few guests.

Danish Prime Minister Lars Løkke Rasmussen will take part as well as several members from the Scandinavian royal families, as they are both close friends as well as related to the Danish Queen and the Danish royal family.

An official guest list has not been published by the royal house, as the funeral is a small private ceremony. However, all the Danish TV stations will be transmitting from outside the church both before and after the ceremony.

During the public castrum doloris today visitors will be able to listen to performances by opera-singer Monica Stevns, operasinger Jens-Christian Wandt, violinist Philippe Benjamin Skow and castle organist Jakob Lorentzen. Music by A. Vivaldi, César Franck and J. Massenet as well as Danish psalms and songs