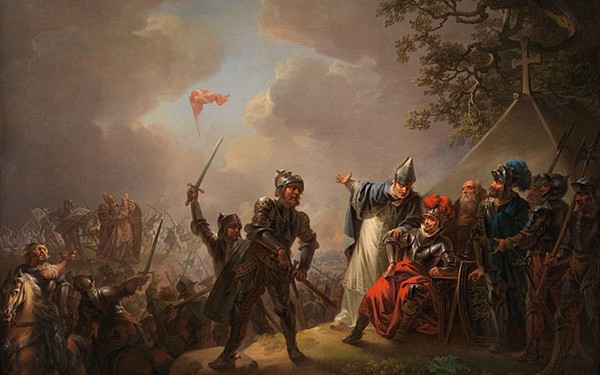 Painting of Danneborg as it falls from the sky. Picture: Statens Museum for Kunst in Copenhagen

Dannebrog officially fell from the sky on Valdemar’s day the 15th June. This year, the flag is celebrated in both Estonia and Vordingborg. Find out why.

Despite Danes not being very religious, the Danish flag is seen as God’s own banner, which came falling from the sky back in 1219.

Hence, in 2019 a huge celebration takes place to commemorate the 800-year jubilee.

Vordingborg was the capital of Denmark at the time, and the remains of one castle tower (the famous Goose tower) and its fortifications, where King Valdemar lived, will be at the centre of the festivities taking place there.

So how did if fall from the sky?

The year was 1219, and Danish King Valdemar II was leading an attack in Estonia; the aim being to conquer the Estonians and to Christianise them.

The battle had been fierce, bodies lay spread out over the field, battered and bloody, and any hope of victory seemed lost. Suddenly, the surviving soldiers heard thunder, the dark clouds scattered, letting a few rays of sunlight shine through.

They looked at the sky above them and saw a red flag with a white cross come floating down. It was as if God had decided to send a sign to the weary men below that all hope was not lost, and that they should take the flag as a sign of God’s faith in them – enabling them to win.

The actual design of Dannebrog with the white cross on the red background is identical with the brand used by the crusader knight order of the Johannites.

They later became the Maltese order and their white cross was no longer simple but had notched tips.

Historians are not quite sure how to interpret the legend, and the date and year of the battle is also somewhat contested. It is believed that Dannebrog, or a red flag with a white cross in it, was most likely the banner used by the Danish crusaders, who in the beginning of the 13th century made efforts to Christianise Estonia.

Due to this battle, the official Dannebrog day is celebrated every year in Denmark on Valdemar’s Day the 15 June.

Plans for the celebrations on 15 June:

At 11:00 Prince Joachim and Princess Marie will be present at the memorial ceremony at Vor Frue Kirke as well as at the events at the town hall and the town square in Copenhagen.

Vordingborg: From 16:00 to 18:00 the Danish Crown Prince Couple will participate in the celebrations of the 800-year jubilee in Vordingborg at and around Danmarks Borgcenter, Slotsruinen 1, Vordingborg.

All public institutions must fly Dannebrog on the official flag flying days.

If you are in doubt just check your local bus. If it has a flag flying, you can be sure it’s for an official occasion for instance for members of the Royal family.

The flag must be raised at sunrise (however never before 8:00) and must be lowered at sunset

For me Dannebrog has a symbolic value, and when I see it flying on bank holidays and other special occasions, it fills me with a more solemn feeling. Also, when I see it abroad, whatever the occasion, I feel connected to Denmark and it gives me a sense of belonging, a community feeling. I know it fell from the sky, somewhere, I don’t remember where. I don’t know who else used the flag.

Of course, it’s also a national symbol of unity, but first of all I see the birthday cake full of Danish flags when you ask me about it. I also think of Dannebrog as part of being Danish, and everything about our society that goes with that.

I think Dannebrog is a beautiful flag and it fills me with joy, warmth and a feeling of safety and security. I know it fell from the sky during a battle in the Baltic States, was it Lithuania? No, I don’t know who else used the banner.

A bit of flag history and why it is so special

What we do know, is that the flag is an important national symbol used by all Danes since the middle of the 19th century. Up until the mid-1850s only the King and State institutions, such as the military, could use it.

After the infamous war against the Germans in 1864, when Denmark lost not only the war and territory to the Germans, but additionally and more importantly their feeling of being a global empire, Dannebrog became the symbol of national gathering.