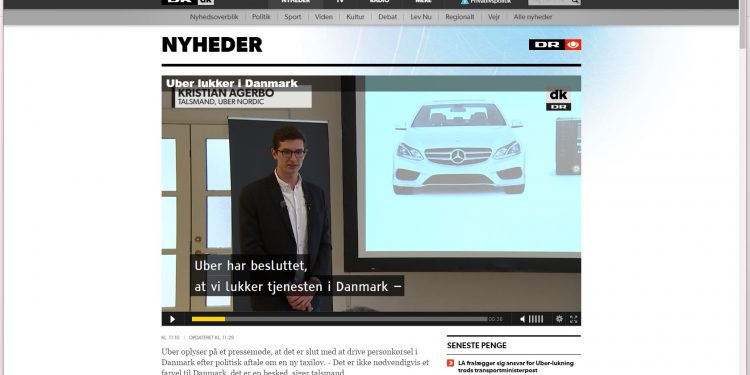 Uber announced that it has decided to close it service in Denmark, as it will not comply with the new Danish taxi legislation’s mandatory elements. Uber will keep its Danish development department with 40 high tech employees.

The surprising statement was issued today at a press meeting by Uber’s Danish spokesperson, Kristian Agerbro from Uber Nordic.

The reason for this drastic decision is the new taxi legislation passed last month by Danish parliament, Folketinget.

In the new legislation, many limits on taxi driving in Denmark have been abolished, such as the obligation to have a commercial driver’s licence, erhvervskørekort, as well as any geographic limitation on where a taxi driver may operate.

However, maintained in the legislation are three conditions, which, according to Uber’s spokesperson, its drivers cannot comply with.

These are related amongst other to the equipment needed- such as a taximeter, seat senor and video surveillance equipment.

Apparently, these demands were too much for Uber.

Since its arrival in 2014 in Denmark, the service has been a problem for the authorities, as the drivers did not comply with the Danish taxi regulation. Uber claims to have 2,000 drivers in Denmark serving 300,000 customers.

As of Tuesday 18 April, the app in Denmark will be closed.

A few of the main points of the new taxi- legislation

The number limitation is abolished – meaning that anyone complying with the legislation has the right to get a taxi driving permission.

No longer any obligations to have a commercial drivers licence – however, an extended chauffeur license is still required.

The equipment requirements for taximeter, seat sensors and video surveillance equipment are maintained.