Basel – take a short break to an amazing Swiss GEM 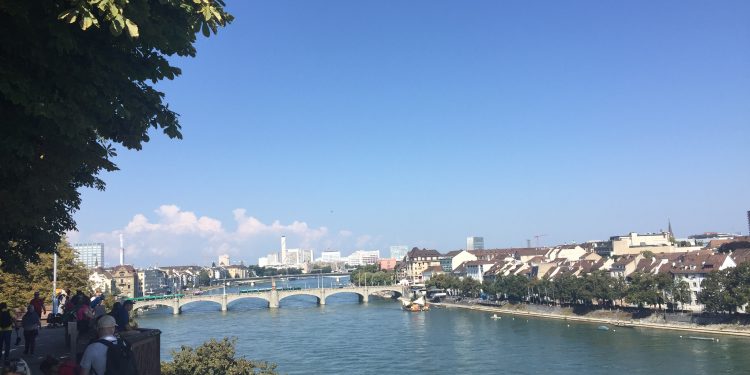 Despite being home to multinationals and their HQ's such as Novartis, Basel has protected and maintained it's old town and access to the river.

Switzerland is breathless mountain views, deep-blue lakes and historic cities. As an overlooked jewel, where Germany, France and Switzerland meet beneath the Black Forest mountain region and the Les Vosges hills in Alsace, lies the city of Basel, a place to lose your heart.

Are you looking for a unique travel destination?

Then spend a luxurious weekend in Basel. Why? Because Basel is Switzerland’s cultural centre, and a real gem if you are an art lover.

Merely one hour and thirty minutes after leaving Copenhagen airport you’ll put your feet on the ground at Basel / Mulhouse. The nearby Basel city centre is a surprising and lively meeting with the European past.

Celts and Romans built settlements here more than two thousand years ago, as they found the city’s favourable location next to the river Rhine attractive. Walk through the eye-catching inner city.

Be astonished by the prettiest spots and plenty of middle age houses and narrow streets with small luxury shops.

Rest your sore feet and have an apéro (local for aperitif) before dinner in one of the innumerable Swiss, French or Italian restaurants.

The climate, being mild and friendly for more than six months of the year even makes open-air dining possible from May until October.

Besides medieval alleys and buildings, explore the open spaces and world-class modern architecture.

If you expect the city to be full of only past times scenery, you are greatly mistaken.

Today, Basel is a vivid city both to live and to work in, and attracts people from around the world. Despite the local language being Swiss-German, English is very well understood as many expats living here come from English speaking countries.

The historic old town
The river Rhine divides the city into two with the old town called Gross Basel, and the opposite side, Klein Basel.

A stroll along the sunny banks of the river is the ideal place for a panoramic view of the city´s picturesque half-timbered and baroque patrician houses. Bridges, or little ferries without engines pushed by the strong stream of the river, take you from one side of the city to the other.

The most spectacular boat ride runs from the riverbank of Klein Basel to the foothill of the Basel Cathedral. Follow the steep steps uphill and they’ll lead you to Münsterplatz in front of the cathedral.

Take a guided tour or discover Basel by yourself. Either way you’ll be surrounded by medieval buildings and alleys, old water wells and other works of art.

The mild weather throughout spring, summer and until early autumn, bring people outdoors. As the Swiss eat out a great deal, both for lunch, and also under a blue sky after work, Basel literally swarms with social get together.

The favoured meeting spot seems to be the river, converting the riverbank into a lively social space, either at a restaurant or people will bring their own food, a bottle of wine, and share it with friends sitting on the steps of the riverbank.

Don’t miss out on Basler Fasnacht in 2022
Fasnacht is the Swiss-German dialect word for carnival. This annual Swiss festival takes place at the end of winter or in the beginning of spring where locals, dressed up in fanciful costumes, parade with glowing lanterns and wagons with slogans painted all over them.

For three days, the streets, bars and restaurants are filled with music from drums and piccolo flutes. From Christmas onward, preparations by mask and costume makers and lantern-painters are touched by the Fasnacht fever.

It is NOT about samba music and dancing in the street. For Swiss residents, Fasnacht is the highlight of the year. Not a big parade set-up to attract outside visitors but a Cortège, as they call it, a passion and a lifestyle.

Local citizens, a motorbike club, doctors, nurses, the police and many more, participate in the serious event.

As an expat living in Basel, Fasnacht is puzzling and hard to comprehend, and almost impossible to write about. The gravity about Fasnacht astonishes all first-time visitors.

It is loud, colourful and funny with an underlying sound of melancholy coming from the piccolo flutes.

Everywhere you hear the sound of atonality played by this traditional instrument.

The beginning, Morgenstraich, starts in the early and still dark spring morning at 4 am. It is spectacular. At first the church bells chime.

All the streetlights are out. For a split second; total darkness and silence. Then, the lanterns glow. The music starts. The parade moves down the inner city and spreads all over town.

Museums and fairs
There are plenty of museums and renowned fairs to visit and the city’s 40 diverse museums make Basel a unique Swiss cultural centre.

If you like the atmosphere in the modern art museum, Louisiana, in Denmark, you will probably recognise the similarity between its “sister” the most popular art museum in Switzerland, Foundation Beyeler.

Both are founded on the idea of creating an exciting synthesis of art, architecture, nature, and daylight. All of which are harmoniously combined.

Foundation Beyeler’s collection contains over 300 masterpieces of modern and contemporary art including works by Picasso, Matisse, Giacometti, and Andy Warhol, as well as many other famous artists.

The mechanical metal sculptures in Museum Tinguely are a “must see” for anyone visiting Basel. The collection consists of work by Jean Tinguely, an important 20th century Swiss artist.

The museum lies next to the river Rhine in Klein Basel and has a public restaurant, Chez Jeannot. From this end of the city it is also possible to make the famous jump into the river and float downtown with the steam.

The Basler people place their clothes in a special swimming bag – a Wickelfish. This is a waterproof bag that keeps you floating, head up, and your belongings dry, as you swim. It’s a cold dip, but fresh and clean. A Wickelfish can be bought in one the numerous pharmacy´s.

Vitra Design Museum was the first European project designed by the Canadian-American architect Frank O. Gehry, who is known for one of the world’s most admired contemporary works of architecture; the Guggenheim Museum in Bilbao, Spain.

Take one of the city’s many cable cars/tram lines to reach the Vitra Design Museum where you will find design exhibits from the past and present related to architecture, art and everyday life.

Kunstmuseum Basel was vastly extended when it inaugurated its new modern venue in April 2016. The old building from 1936 in the middle of the historic city has been connected to this must-see-Neubau by an underground passage. It holds great art objects and this wonderful anecdote:

Pablo Picasso only ever spent one night in Basel back in 1932, yet the city and the painter are linked in many ways. Did you know that Picasso’s career was greatly influenced by Basel collectors, art historians and dealers?

Certainly, their interest in modern art was marked by him and since 1947 two works, Seated Harlequin and The Two Brothers have been on permanent loan to the Kunstmuseum Basel.

Disaster occurred when in 1967 the owner of the paintings went bankrupt and the Picasso paintings had to go. They were scheduled to  be taken down from the museum walls and only the vast sum of CFR 8.4 million could prevent them from leaving Basel. The Basel government agreed to provide the 6 million and the remaining  2.4 million would have to be raised privately.

On November 25. 1967, nearly the entire city went out on the street and begged for the Picassos. The citizens of Basel, as still common i Switzerland, were called to vote.

”All you need is Pablo”, shouted the pro-Picasso party, art lovers, youthful protesters and a broad part of the population. A democratic referendum decided for the first time in history to acquire modern art.

Touched by the decision in Basel, Picasso donated three more of his paintings to Kunstmuseum Basel.

Once a year it attracts leading international galleries and collectors. However, it is not a closed event, and is also open to the general public who just want to stroll around and explore what’s going on in the world of contemporary art.

The month of December calls for the Christmas markets. Basel offers a large and beautiful Christmas fair with a variety of arts and crafts, food and steaming hot Glühwein.

The Christmas markets are found on two town squares: Münsterplatz in front of the Cathedral and, Barfüsserplazt, a short walk further downtown.

The Zoological Gardens, called Zolli by locals, is a lovely green oasis. The small Basler Zoo is not comparable to the size and numbers of animals you meet in the Copenhagen Zoo.

Nevertheless, it is well worth a visit at any time of year. It opened in 1874 and is home to a large number of exotic animals. From big window glasses you can get unbelievably close to the lions. A lager cavern holds two Indian Rhinos and reminds you of extinct dinosaurs.

Transportation
EasyJet flies direct from Copenhagen to Basel/Mulhouse airport. On arrival, look at the sign on the wall before you decide to step outside. Choose the Swiss exit and not the French.

Jump on the airport shuttle just outside the building. The price is CHF five – remember you’re out of euro zone! The ride downtown takes about twenty minutes. The bus stops at the railway station SBB – which is within walking distance to the city centre. No need for a taxi.

But of course you can grab a cab as well, if you prefer travel without any hassle. Cable cars/trams, the most effective means of transportation, criss-cross the city and will take you everywhere you want to go.

Exclusive experiences are rare. Nothing in Switzerland comes cheap. Trust a Danish expat who has resided here for three years. Basel is stunning, so don’t think twice about going to Basel. The experience is well worth it.