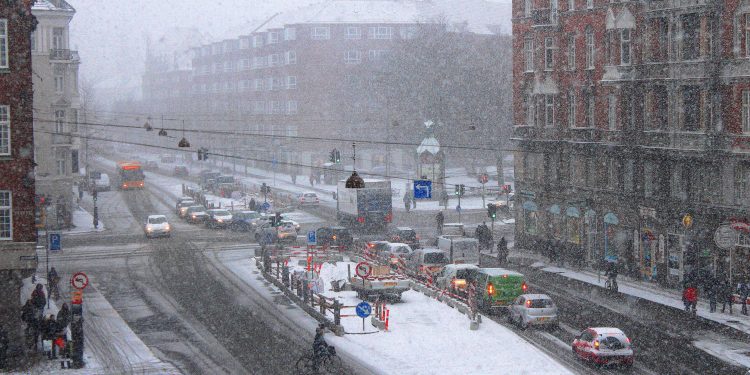 Picture: Hisham Ammar from a past winter in Copenhagen with both snow and sleet - later it turns to rain and is just cold and wet.

Cold weather announces its arrival just in time for the first December as DMI warns of low-pressure systems bringing a mixture of both white and wet downpours and risk of ice storms.

The article continuous below

No need to find the toboggan just yet even if the weather forecast from DMI announces a change in weather from the mild, wet, and grey to more cold but also unstable weather and whatever comes down as white will not stay for long.

The most dangerous part of the weather change is the potential risk of local ice storms, in Danish islag.

This is when the ground is cold and frosty and increases the risk that rain, when it hits the ground, turns into ice.

A warning has been issued from DMI to take care this week as the risk is local and therefore difficult to predict precisely.

Ice storm can be most dangerous as it is impossible to see that a wet road, pavement, or bicycle path is not just wet, but also very slippery due to the sudden arrival of ice on it.

Cloudy and some downpour from the west, in the beginning it may fall as snow or sleet but during the night it turns into rain.

Temperatures range from minus 3 degrees C to plus 2 degrees C, later it will get warmer, up to 6 degrees Celsius.

Strong winds from the north and northwest, with risk of gusts of wind of storm strength at the Atlantic coastline.

The day will be windy with strong gusts of wind for the whole country and later during the day the strong wind will gradually recede.

Nighttime temperatures will be mild ranging from 0 to 8 degrees Celsius. During the night, the wind picks up again.

Showers will mostly be with rain; however North Jutland and North Zealand may see some snow or sleet.

The article continuous below

Thursday
Not much change, showers may still be with sleet or snow and temperatures will range from 0 to 3 degrees during the daytime, dropping during the night to 0 to minus 6 degrees Celsius.

Friday, Saturday and Sunday
The weather forecast remains the same. Risk of both rain, sleet, and snow as day temperatures remain above 0 and nights are between a few degrees minus to a few degrees plus.