Brother Artists is a secret exhibition not advertised in English 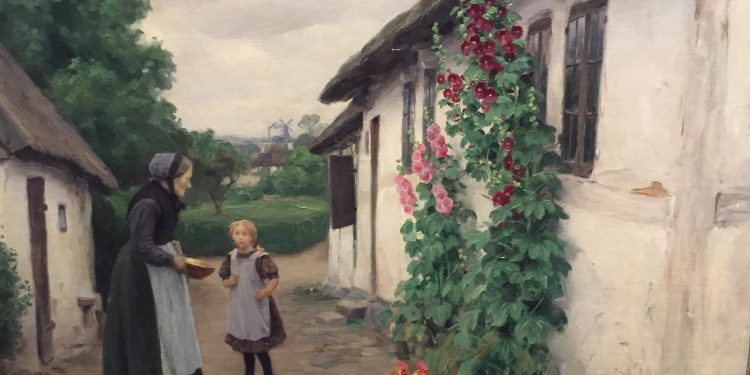 Brothers in Art shows the best of Danish realism from 1880 to 1920. Picture from Nivaagaard Museum Bente D. Knudsen

It is a small hidden gem in Nivå, north of Copenhagen. Take advantage of this beautiful and unique museum, located in lush green surroundings a short walk from Øresund.

They were not related but lived and painted during the same time period from 1880 to 1920.

Laurits Andersen (L.A. Ring) and Hans Andersen (H.A. Brendekilde) met in 1877 at the Royal Danish Academy of the Arts, Det Kgl. Danske Kunstakademi, where they developed a deep friendship and started to portray the world they knew so well.

They show the life, work and death of peasants and workers living in the countryside, some of the poorest social groups at the time in Denmark, and the realism in their motives become some of the greatest examples of realism in Danish art.

They share a studio, and as both have the very common surname Andersen, they decide to use an old tradition when selecting their future artistic names.

Born in small towns, one in Ring near Næstved and the other in Brændekilde on the island of Funen, this becomes the inspiration for their names; in Denmark, at the time, bastards, who were without a father’s surname, were often given the name of the town they came from.

The exhibition shows a vast selection of some of Ring and Brendekilde’s best works portraying life in small villages on Zealand and Funen as well as Copenhagen and from some of their many travels.

They give a unique insight into life in Denmark from the 1880s to 1920s, and if you have ever visited one of the open-air museums either in Lyngby or in Odense, the portraits depict the life in the small country side towns and on farms in a most realistic way.

The museum is easily reached by car or train (take the train to Helsingør and get off at Nivå) from where you can walk down to the museum (about 800m).

The museum has a delightful coffee house with a selection of Danish lunches, small snacks, coffee and cake so you can make a full day excursion on a grey January day.

Should you miss out the opportunity to see it in Denmark, the exhibition will travel to Paris in the spring of 2020, as the two painters have reached international acclaim beyond Denmark’s borders.

Open Tuesday to Sunday, the exhibition runs until the 26 January 2020.

The Nivaagaard Collection was founded by landowner Johannes Hage, whose private collection was donated to the public as an independent institution in 1908. Located in a large, romantic garden full of beautiful old trees and abundant rhododendrons it is also worthwhile to take a stroll in the lush green surroundings.

Experience art from the Italian and Northern European Renaissance, the Dutch Baroque and the Danish Golden Age in the museum’s permanent collection. In addition, the museum presents two to three special exhibitions annually.