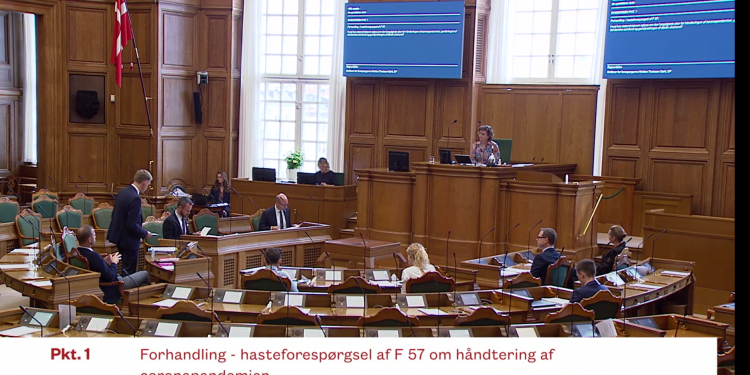 Screen dump from the direct transmission of today's discussion in the Danish Parliament. All discussions are transmitted live at ft.dk

The Danish Government is a minority government able to stay in power due to the support from three minor parties, Enhedslisten, Socialistisk Folkeparti and Radikale Venstre.

The first two are traditional left-wing parties, one further to the left than the other. Det Radikale Venstre is a party more in the middle, voting at times with Socialdemokratiet and at times with the right-wing parties. At present they are one of the support parties of the Danish minority government.

Today’s discussion in parliament is about a text, which will oblige the Danish Government to be more open about the information and analyses which are behind the opening of the Danish society in phase two after 10 May.

The text has come about after pressure from De Radikale Venstre, Venstre, Det Konservative and Dansk Folkeparti, who are concerned about the lack of involvement of the rest of parliament in this important phase two.

Actually, according to DR1’s political analyst Christine Cordsen, it was Det Radikale Venstre who threatened to put forward a text which would be passed without the government, a text which would go against the minority government something which no Danish Government is keen to see happen.

Therefore, the Danish Government has had to negotiate an agreement with Det Radikale Venstre and Enhedslisten, which is the text being discussed today in parliament, and which all the Danish parties can vote in favour of.

The text will oblige the government of Mette Frederiksen to negotiate more openly and present more openly all the material from experts and the Danish health authorities with the rest of parliament, information which will be the basis of the phase two opening decisions.

At present not much is known about what will happen after 10 May, will the Danish border reopen, will restaurants and cafés, libraries and other cultural institutions be allowed to open – even if gradually? Will the older school classes be able to start again before the summer holiday? How many people will be allowed to gather (at present the limit is 10)?

The disagreement in parliament is due to the decision by the Danish government to choose the most careful reopening scenario after Easter (three scenarios of reopening had been calculated by the experts and their consequences for the development of the epidemic) and actually add even a bit more carefulness to their decision.

This created a great deal of disagreement in parliament, as the closing down and the voting of huge relief packages had been done in unity by all the political parties in parliament but the reopening became a purely government decision without consulting with the rest of parliament.

This is the situation in the phase two reopening which the opposition and one of the government’s support parties want to avoid. They want it to be a joint reopening – negotiated in agreement and with all the models and analyses presented openly.

Mette Frederiksen said that the basis of the reopening of phase two would rest on five main elements:

Next week we will all be wiser and maybe even sooner.