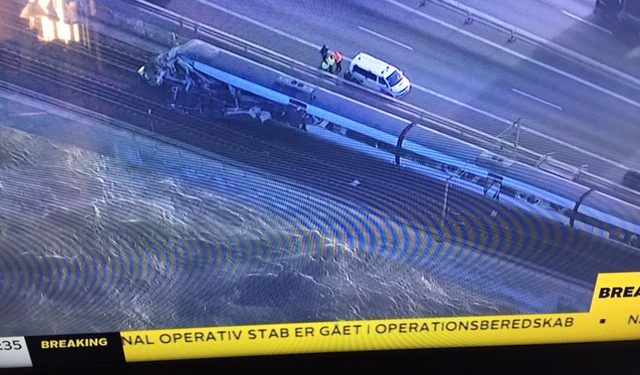 Picture of the accidented train on Storebæltsbroen - from TV2 news screen dump.

Denmark awakens to the news of a deadly train accident on Storebælt this morning with six dead and 16 injured the Funen Police informs.

A cargo train transporting Carlsberg beer between Fredericia and Høje Taastrup seems to have been the cause of the accident, as parts of the roof and other items from the cargo train hit the passing IC train, which was running from Aarhus to Copenhagen Airport.

The train had left Aarhus station at 05:19 with 131 passengers on board. The Funen police received news of the accident at 07.35 and immediately proceeded with emergency evacuation measures.

The Storebælt bridge had been closed to car traffic all morning due to the strong winds from the raging storm Alfrida and has remained closed for several hours after the accident.

The bridge has been reopened for traffic in both directions, however, the bridge remains closed to wind sensitive vehicles. A speed limit of 50 km is imposed.

The train accident took place on the so-called low bridge, Lavbroen, just a few minutes from the Nyborg (Funen) side of the bridge.

The Funen police informs that relatives and family to passengers on the train can call the emergency number 96 97 00 00 for more information, and also request all passengers to try to reach their families to inform them of the status of their situation.

An emergency centre has been established in Nyborg to which all passengers not requiring hospitalisation were evacuated. The centre is slowly closing down as passengers are leaving it to go home, the Funen Police informed at their 12:00 press meeting.

Of the 16 injured passengers, 14 were slightly injured and 2 moderately, none have life threatening injuries the medical staff at the press meeting informed.

The exact cause of the accident is still being investigated and the Funen Police has not wanted to inform further about the ongoing investigation.

At the press meeting it was still not clear what exactly hit the train, or whether it was the train that hit items lying on the tracks. Passengers sitting in the rear train carriage on the train said to TV2 News that they heard several very loud bangs and the sound of glass hitting the side of the train, after which the train braked and came to a standstill.

However, passengers in the rear carriage were not seriously affected, and only became aware of the seriousness of the incident when police and rescue workers came on board to evacuate them.

The storm Alfrida (named by the Swedish meteorological authorities) is causing serious problems for the investigation and clean-up of the train accident on the bridge, the Funen Police informed, as well as problems with flooding in several low-lying areas around Denmark.

Due to the seriousness of the situation, a closed bridge of strategic importance to the Danish infrastructure, and the storm floods caused by the strong winds, a national emergency and security centre has been put in place.

The National Operative Stab, also called NOST, consists of members from the Police, the Danish Emergency Management Agency, the Defence Command, PET and FE (Danish intelligence services) as well as the Foreign Service, and any other public or private agencies and businesses needed in the immediate security or emergency situation.