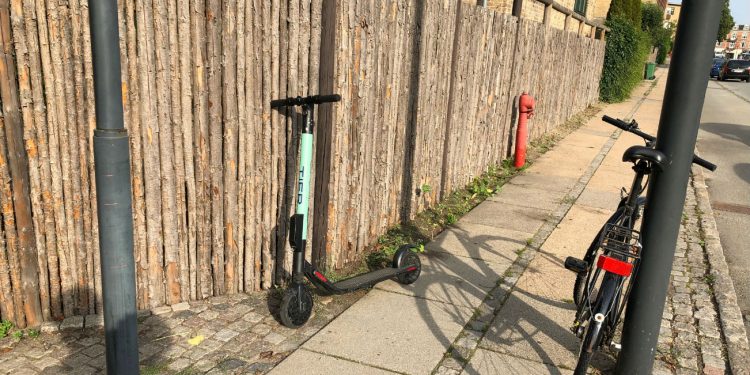 Do you know the maximum blood alcohol level for riding an electric scooter compared to a bicycle? Find out more below.

Since January 2019, they have been legal to ride in Denmark and since then, in Copenhagen alone, more than 100 accidents have been registered, of them a large number due to alcohol.

At the beginning of the week, Danish newspaper, Berlingske Tidende, reported that more than 100 head and other injuries had been noted to have occurred either to users of electric scooters or to people who fell over them (they are often left randomly on streets and pavements).

Maybe this fact remains unknown to many, who might be associating taking an electric scooter home from town with taking your bicycle?

In Denmark there is no legal limitation for drink driving when riding your bicycle! It is a matter of evaluation for the police, who can prescribe a fine.

The legal framework says that a cyclist must be able to ride the bicycle in a safe way, no matter how much alcohol the cyclist has consumed.

The issue has received wide spread coverage amongst Danish media and politicians, however, so far, the Danish government has announced it will not take action (concerning the use of electric scooters) until January 2020, when the one year trial period runs out and an evaluation is to be made in order to make the final legal framework concerning their use.

The Copenhagen based rental company Lime (US origin) announced earlier today that it will install a lock on its electric scooters from 22:00 to 06:00, where a potential user must first evaluate if he or she is able to drive the scooter safely. Only a positive response will let the APP open the scooter.

Critics voice that this is not enough to prevent drunk driving.

Danish police will continue to be on the lookout for drunk drivers on electric scooters they say.

Do you know the Danish regulations for riding an electric scooter?

Apart from the maximum alcohol blood level, and the age limitations (to ride an electric scooter you must be 15 years old), the rules are the same for electric scooter users as for cyclists meaning:

After use always park the electric scooter in a way that does not endanger others or put them at risk of falling over it is the advice from the Danish traffic security association ( Rådet for Sikker Trafik).