Explore the rich and historic retail heritage of Copenhagen 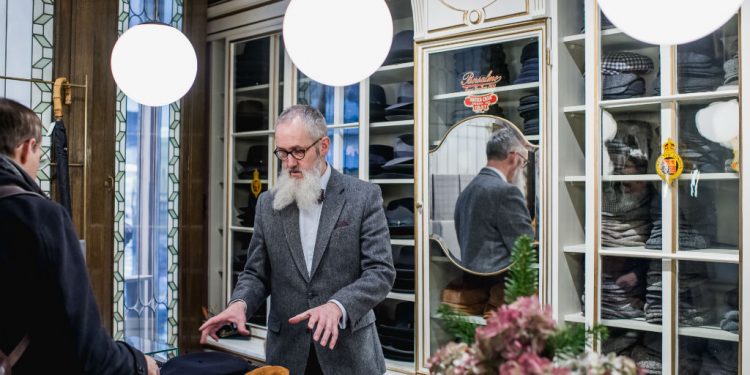 Bernhard Tommerup and his wife, Bess Kristoffersen, run the hat shop Petitgas located on the first floor of the building on Købmagergade 5, as it has been for 161 years. Picture. Mayra Navarrete

Copenhagen has changed as old shops have close to leave room for multinational luxury brands. However, there are still a few historic and unchanged shopes. Take a walk through town and visit these gems.

Not only are new districts in the making, such as the new Nordhavn 2150, even the venerable and well-trodden pedestrian street “Strøget” is changing its look.

Despite this, you can still find a few shops who remain unchanged and dedicated to their centuries old heritage, they remain located in the same buildings as they have for more than 100 years, some still belong to their founding families.

You may not have noticed them as you strolled along the shops on Strøget; they are slightly more hidden to the expat eye than the multinational brands, but next time you go, maybe take the time to explore the ones described here.

Each of them represent, in their own way, a piece of Copenhagen’s (retail) history.

Our tour begins below.

Chapeaux Petitgas has sold men’s hats since 1857. The shop’s name is not derived from any specific type of Danish hat. Instead, it is a testament to the international influence of travelling Europeans;  it was the surname of its founder, the young Francois Petitgas, of French origin.

He used his family name  for his hat factory and shop when he opened it on Købmagergade 5 in the middle of the 19th century.

At the time, of course, this was not a pedestrian street.

The Petitgas family lived in the same building above the shop and in the backyard buildings, almost 40 people were employed manufacturing the custom-made hats ordered by affluent Copenhageners.

The shop remained in the family until 1924, when the Petitgas widow sold it to Anton Rasmussen. He kept the shop’s original name and it stayed in his family until 2002.

Today, Bernhard Tommerup and his wife, Bess Kristoffersen, run it; it is still located on the first floor of the building on Købmagergade 5, as it has been for 161 years.

The shop contains a state-of-the-art cash register– that is, when it was installed almost 100 years ago.

Today, it is an impressive relic from olden times. The shop is also home to a delightful range of old hat-making artefacts, including, amongst other things, a bizarre-looking instrument for measuring and drawing a person’s head, used to produce custom-made hats.

The instrument is still in use for Swedish university professorial and doctoral graduates, who come to have their head measurements taken for their special ceremony hats which resemble the mortarboards used in many Anglo-Saxon countries.

Such a tradition is no longer in practice at universities in Denmark.

“Even if you are not on the lookout for one of the high quality men’s hats and caps sold in the shop, you are always welcome to step inside and have a look,” says Berhard Tommerup, he is used to his shop being something of a tourist attraction.

Another gem lies on the corner of Købmagergade and Kronprinsensgade, just a few blocks from Petitgas.

Most Copenhageners will know the name P. Hertz, even if they may never have bought anything from this renowned, high-end jewellery shop.

Founded in 1834 by Peter Hertz, who wanted to design and make jewellery in his own workshop, the shop has been in its current location since.

Not only is the location the original one, the shop has a beautiful family history as well with a sixth-generation Hertz now in charge of running and renewing this revered old jewellery workshop brand.

In an interview some years ago, Berit Hertz, the current female owner said, “The challenge of course is to keep the heritage and authenticity, while at the same time ensuring a modern appeal to new generations as well.”

A good mark of the shop’s success in doing just is having been the supplier of the wedding rings used by the Danish Crown Prince couple for their wedding in 2004, as well as numerous other gifts for certain, which is why it maintains the title of “purveyor to the royal house”, which it has had non-stop since 1906.

The inside of the shop has been updated with respect for the original design. Mostly the update has been about opening up the windows to allow more light to come in and providing a better view from the outside into the shop.

With its own designs and productions, a range of quality jewellery brands, made-to-order designs in collaboration with customers, with many alterations of “grandmother’s jewellery”, the Hertz shop is set for generations to come.

As with Petitgas, you are most welcome to step inside and get the feel of where well-to-do Copenhageners have bought their engagement rings for centuries.

By now, you may be getting hungry.

So, take a stroll up Strøget in the direction of the town hall – not very far. But as you pass the big church on your right, Helligåndskirken, proceed a little further and you will come to a small square where, on your right-hand side, is the small street of Skoubogade.

Here you cannot avoid being drawn to the magnificent window display of the cake and pastry shop (konditori in Danish), La Glace.

The confectionary shop La Glace was founded in 1870 by Nicolaus Henningsen, originally from Slesvig – located in the southern part of Jutland (Sønderjylland), which was Danish, then German, to become Danish again in 1920.

In Sønderjylland, they are famous for their cakes and pastries. If you are ever invited to a Sønderjysk kaffebord , a cake and coffee table, make sure to skip breakfast and lunch before you go!

Stepping into La Glace will take you back at least 100 years to a time when French style cafés did not exist in Denmark, but going to a konditori for coffee and cake did.

Foreign inspiration was the “leitmotif” for Thorvald Schrøder, the second owner, who had married the young widow of the founder (Henningsen had died only six years after the opening – and his widow had run the shop alone until her marriage to the much travelled Schrøder).

He travelled extensively to Hamburg, Paris, Dresden, even to Vienna it is believed, to find out how to run a modern cake and pastry shop – and this was in the 1890s!

The interior design – still here in 2018 – was the result of his travels.

Inside the shop, you will be amazed and feel as though you have travelled back in time. You can go in just to experience it or to have a seat and treat yourself to magnificent, delicious, yummy cakes. The selection is impressive by any standard, you can easily skip lunch as well!

Take note that this confectionary only serves coffee and tea – no modern latte stuff – and be prepared for a very expensive cake.

You won’t regret it though.

A cake from La Glace ranges at the absolute top-end of cake making in Denmark. Take note that tourists have found it too and during the summer season there is quite a line standing outside waiting for a table.

Current owner, Marianne Stagetorn Kolos, has run La Glace since she was 22 years old, when she took over from her mother who had run it for 11 years.

When questioned about why La Glace, with its brand name, fame and status, has not become a chain (as so many others do – take Emmerys and Lagkagehuset as examples), Marianne explains that this is not her focus.

“I think La Glace is unique, both in what we do, but also from our history and our location. Recreating that somewhere else has not been a priority for us, instead we want to focus on making this confectionary shop a place which lives onand one that transcends generations of cake eaters.”

After these three shops, you may feel the need for a drink, which leads us to the final shop in our selection.

Go back down Strøget until you reach the last stoplight before Kongens Nytorv.

Here you go left along Kristen Bernikowsgade, which becomes Gammel Mønt a little further on to find the wine shop Kjær og Sommerfeldt.

Some people start businesses simply because they are fond of a product and can sell it within their social networks.

Such was the start of this wine shop and wholesale business, when, in 1869, Charles Christian Kjær, at age 31, started to import wine and sell it to friends and business acquaintances at Børsen,the Danish stock exchange.

As his business grew, he decided to take on a partner, Wilhelm Ferdinand Sommerfeldt. Thus, Kjær og Sommerfeldt was founded in 1875.

It grew to such a size that, in 1919, they acquired the current location on Gammel Mønt and in 1928, after extensive renovation to make it into a wine shop, they were finally able to move in.

The Kjær family, headed by his son Peter Kjær, ran the business for 60 years until 1957. Today it is a private business run by Mads Stensgaard.

At the beginning of the 20th century, the shop’s wholesale business, focusing on restaurants and hotels, was started.

And later,Kjær& Sommerfeldt acquired the title of “purveyor to the royal house”, a title they hold to this day.

Who knows, you may run into one or the other of the royals when you go.

With more than 1,700 wines on stock, you should be able to find one that fits your tastes and budget, or just have a glass at the newly furnished wine bar located inside the shop.

If you feel like trying something new, and experiencing the unique and impressive interior, frequent wine tastings at a set price are regularly organised.

Or just peep inside and have a walk around.  The interior  was extensively renovated some years ago, with respect for the heritage and history, when even a couple of the old safes were taken out of hiding.

Find the locations of the shops below.