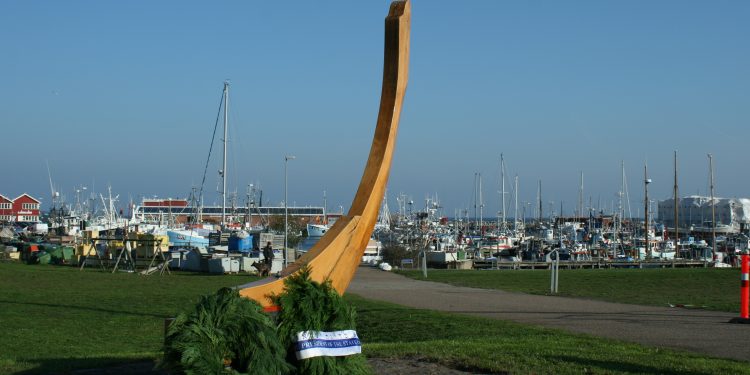 The memorial stem in Gilleleje Harbour.

Denmark commemorates the 75th anniversary of the unique rescue action, which saved 98 percent of Denmark’s Jews in October 1943.

The downtown and harbour area of the small quiet village of Gilleleje was completely sealed off Thursday morning, never ever had the local villagers seen so much police in their small and normally peaceful fishing village on the North Zealand coast.

Next to Gilleleje Church, a policewoman moaned when the church bells chimed again. “This is the third time this morning,” she said. “It rings every full hour and then for quite a long time.”

Danish police had been on the spot since the early morning, ensuring road blocks and informing the locals of the traffic changes due to the important and high security level visit.

A beautiful Indian summer morning with clear blue sky and rising sun greeted the Israeli President and Danish Prime Minister as they each laid down wreaths at the memorial site in Gilleleje Harbour in remembrance of the Danish Jews’ escape to Sweden in October 1943.

The memorial, made by the local shipyard in the shape of a ship’s wooden stem, has a small inscription, commemorating  the 1,300 Jews who were able to escape from Gilleleje to Sweden, and the fishermen who sailed them there.

The terror of Holocaust only reached Denmark’s Jews in October 1943. Until then they had been able to live in relative peace and without the fear of deportation.

This was due to Denmark’s special status amongst the occupied countries. Denmark’s government actively cooperated with the German occupation force, in Danish those years are called the years of “samarbejdspolitikken”.

Germany was able to acquire many Danish agricultural and food products for its armed forces, and in return, it was made clear by the Danish Government that deportations of Danish Jews were not accepted.

Denmark’s Jews never carried the yellow Star of David, as Danish King Christian, open hearing from his government that the German occupation force wanted to implement it, immediately said that if the Danish Jews were to wear it, so would he.

This stopped the Germans from going through with it.

The policy of cooperation ended in August 1943, opening the door to deportations of the Danish Jews.

On the 1 October 1943 everything was ready for a quick action against them, however, it never came into full force.

With historical hindsight, there were several reasons. Not enough German troops were deployed. Also, the Danish Jews were warned about the upcoming action, enabling them to flee before they could be arrested.

A total of 7,000 Jews managed to escape to Sweden during the first weeks of October 1943, representing 98 percent of the Jewish population in Denmark at the time.

The rescue was due to a unique combination of German willingness to warn the Danish Jews, the resourcefulness of the Jews themselves, and the willingness of the Danish population to help them escape to Sweden.

The head of the German occupation force in Denmark, Werner Best, ensured that the Jews were warned by alerting the German diplomat Georg Ferdinand Duckwitz, who had excellent Danish contacts, and who sent on the message.

Unique was also the mobilisation of Danes who helped their fellow Jewish citizens escape.

As Danish Prime Minister, Lars Løkke Ramussen, said in his speech at the memorial service in the Danish Synagogue late Thursday afternoon:

“It was due to the actions of people who took responsibility and made the right moral choice, doctors and nurses who participated in setting up the escapes by using ambulances, neighbours who willingly looked after property and personal belongings left behind, fishermen who put their lives at risk and many more. It was a Denmark of solidarity and humanism.”

Denmark’s Oscar winning film director Susanne Bier’s parents escaped as children to Sweden, and at the memorial service in the Synagogue, she retold the story of their escape.

“They took the train from Hillerød to Gilleleje with their parents. At Hillerød station it was late in the evening, and normally there were not that many passengers at that time of the day.

However, when the station master saw more than 200 people arrive with their suitcases, he understood, what was going on, and he immediately organised that more wagons were be added to the departing train to enable all the passengers to get on board for Gilleleje. He could have acted differently and they might not be alive today.”

All along the Danish Øresund coast you can find small fishing ports where fishermen where actively involved in sailing Jews to Sweden.

Memorial sites have been placed next to the harbours in Dragør, Taarbæk, and Gilleleje, and in Nivå, you can still see the chimney of the local brick factory inside whose buildings many Danish Jews waited before walking down to the harbour to be sailed to Sweden under cover of darkness.

You can read more about the escape action in the book by Aage Bertelsen, October 43, which has been translated into many languages, amongst other English.

Also the recent movie, Fuglene over sundet October 1943, portrays the action and the people involved (Danish only).