Fredensborg is said to be the Queen’s favourite residence 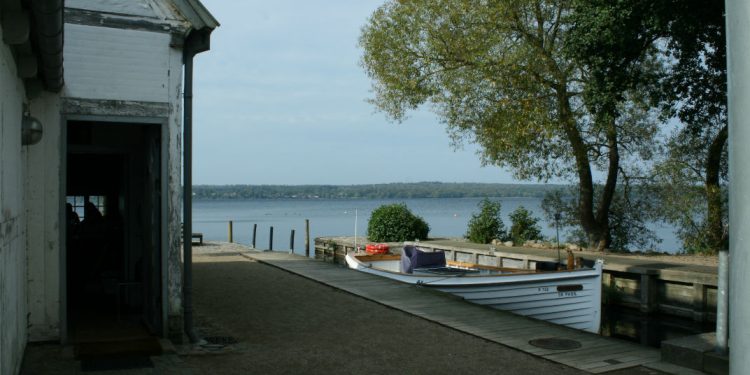 The park is open to visitors all year, a delightful walk is to go down to the lake and visit the small boathouse from where you can also walk along the lake and enjoy the beauty of the area. Picture: Bente D. Knudsen

During July the public can, exceptionally, get a peep inside the royal residence at Fredensborg Castle, said to be the Queen’s favourite.

The royal castles used by the Queen and royal family are owned by the Danish State.

The only exceptions are the three residences which belong to the Queen as her personal property; Marselisborg Slot, Château de Caix in France, and a royal hunting lodge in Jutland at Trend.

The State-owned castles occupied by the Queen and other members of the Royal Family as their private living quarters and for representation are; Amalienborg, Fredensborg, Gråsten and the hunting lodge Eremitage Slottet.

The actual Christiansborg Castle was never used for living quarters; instead, the apartments, designed as royal living quarters, are used by Statsministeriet, the Prime Minister’s Office.

Only the Royal Reception Rooms are used by the Queen, for state visits and official matters.

Unlike other royal families in Europe, the Danish royals aren’t wealthy as such.

Their main source of income is the appanage (royal provisions) granted by Folketinget (the Danish Parliament) every year as part of the state budget.

A royal steward or slotsforvalter is employed by the Agency for Palaces and Cultural Properties (Styrelsen for Slotte og Kulturejendomme) and their job is to act as go-betweens for matters concerning the Danish castles put at the disposal of H M. Queen Margrethe II.

The position is important as the royal steward can address the Queen directly, concerning any renovation and maintenance matters regarding the castles she uses, avoiding paperwork and bureaucracy.

“It’s much quicker that way,” a royal steward explains.

The interior of the castles, where they are “tenants”, the Royal Households have to maintain themselves, but all exterior and major renovations are undertaken by the State.

Another important task for the royal stewards is the registration of all state owned inventory used by the Queen to furnish the castles.

Old lists of everything, from teaspoons to paintings and carpets, the number of items ranging between 50,000 to 60,000, have to be transferred to a computer-based register.

The inventory used by the Royal Households to furnish their residences can be either private, owned by the State, or part of the Kongelige Danske Løsørefideikommis.

For instance, the Crown Prince Silver, used by the actual Crown Prince Couple Frederik and Mary, also comes from the fund and has been put at their disposal by the Queen.

The palace by Lake Esrum in northern Zealand is the Danish Queen’s most frequently used residence in spring and autumn.

The beautiful rooms and halls often provide the backdrop for state visits and royal events.

The Crown Prince Couple also have a summer residence at Fredensborg in Kancellihuset, just next to the main building of Fredensborg Palace.

From 1 to 30 July 2022, Fredensborg Castle, the Orangerie and private gardens are open to the public as  a guided visit.

The opening of some of the castle’s halls and rooms to the public is a result of the Royal Family being in residence in Jutland or in France.

The Fredensborg Palace’s gardens are open to the public all year round. It is one of Denmark’s largest historical gardens, with light, space and plenty of places to have a picnic.

There are surprises around every corner, including The Balloon Park, Queen Ingrid’s colourful shrubs, and The Valley of the Norsemen.

The garden was established at the same time the palace was built, but was re-landscaped in the French Baroque style by Nicolas-Henri Jardin from 1759–65.

If you feel hungry, do not miss out on the delightful little restaurant located just next to the boat house on Esrum lake called Skipperhuset, sit inside or outside and enjoy the view or bring a picnic and sit along the lake.

The restaurant is popular, so remember to book a table in advance.

Christiansborg Castle has much to offer in terms of public visits as it comprises not only the Queen’s Royal Reception Rooms, but also the Royal Stables, the castle ruins of Bishop Absalon’s Castle from 1167, the Supreme Court and the Folketing.

While it can be visited all year round, some venues are subject to the Queen’s usage or other public functions.

A good time to visit is during the weekend, and you can easily spend a whole day there. For more information and opening hours, check on their website, also in English, at www.christiansborg.dk.

During the summer take note that the royal horses will be out enjoying lush green fields for their “summer holiday”, so if you visit the stables during July it will be without horses.

Amalienborg is the winter residence of the Royal Family, situated between the city and the harbour, where, in the 1750s, architect Nicolai Eigtved designed four palaces surrounding Amalienborg Palace Square, with its equestrian statue of King Frederik V.

Two of the palaces are used as royal residences, one as a museum and the fourth for guests on state visits when the Queen is in residence at Amalienborg.

The museum and the guest palace can be visited.

Check the website of the royal castles for more information here.