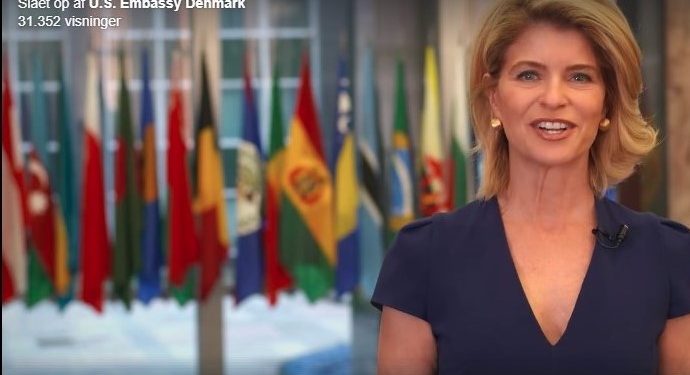 New US Ambassador to Denmark Carla Sands. Print Screen from the presentation video of the Danish US embassy.

Almost a year after the last very popular American Ambassador, Rufus Gifford, left Denmark, a new US Ambassador is finally in place. Tomorrow she will be received in the age-old traditional manner with all the ceremonial pomp the Danish monarchy can muster.

The long awaited US ambassador to Denmark Carla Sands arrives in a cold and wet Danish December. She will arrive together with her teenage daughter she announces in a video on the US embassy’s Danish site.

Here she presents herself as interested in people to people relations, defence and security cooperation as well as trade and investment.

For the first time in many years the US Embassy residence in Klampenborg will be home to children, as Carla Sands is accompanied by her teenage daughter while she is in Denmark.

Carla Sands was confirmed by the United States Senate in November 2017 as the U.S. Ambassador to Denmark. She has a diverse professional background, she holds a Doctor of Chiropractic degree from Life Chiropractic College, she has worked within the entrepreneurial, investment and philanthropic sectors, amongst other as President and Chairman of Blue Ribbon, an organisation supporting the Los Angeles Music centre.

She is also chairman of Vintage Capital group after the decease of her husband in 2015.

It is not unusual that US ambassadors appointed to Denmark are not career diplomats. Neither of the three former ambassadors had any experience with diplomatic relations prior to their posting in Denmark.

Carla Sands will, however, be challenged by the fact that former US ambassador Rufus Gifford was extremely popular amongst the Danes – his marriage in Denmark to his partner was highly mediatised and he appeared in several TV shows.

An important fact is also that Obama contrary to Donald Trump was extremely popular amongst the Danes.

“She will have some rather large shoes to fill out after the job done by Rufus Gifford. That in itself will be a challenge, and it would be, whether it was Carla Sands or anyone else appointed. Also, it is always easier as an ambassador to represent a president who is well-liked in Denmark. It was easy for Rufus Gifford and Laurie Fulton to represent Obama as he was very popular amongst the Danes. Here Carla Sands will have another challenge.”

She arrives at a busy time for diplomats in Denmark. Not only will she meet and present her credentials to the Danish Queen on 15 December but on 3 January 2018 she will meet not only the Queen but also the Danish Crown Prince Couple at the traditional New Year Levee for diplomats held at Christiansborg Castle.

You can hear her full presentation here.

If you are at Amalienborg Slot tomorrow 15 December at 12:15, you might just catch a glimpse of her as she exits the carriage to enter Amalienborg. If you missed our article on the reception of ambassadors by the Queen find it here.