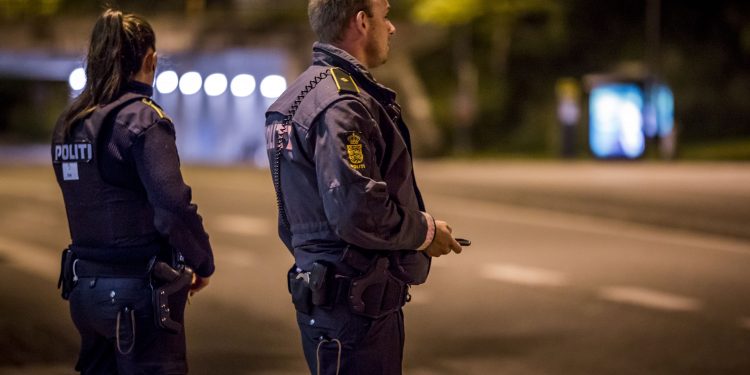 The police will be more present also on foot in selected area of Nørrebro. Picture: Rigspolitiet

Last night in Nørrebro three people were hit in a shooting in Meinungsgade/Guldbergsgade on Nørrebro. An escalation of the new organised crime gang conflict.

A violent escalation of the new conflict happened last night in the Nørrebro area when shootings aimed at other gang members, so the police believe, meant that two innocent 50-year-old men, random bystanders each sitting in their individual cars when the shooting started, where victims of the shooting.

The targets were a 19-year-old man and his 22-year-old friend. The two bystanders were taken to the hospital, with gun shots in the arm and in the shoulder. Their condition is not critical. However, the 19-year-old, believed to have been one of the targets, was hit below his left arm and his condition is critical, but stable, the police informs in a press release.

” Please call 114 if you have seen or heard anything, which could help the police in their investigation, “ says Police inspector Torben Svarrer.

The police is taking the matter very seriously and has reinforced their presence in the streets of Nørrebro.

“This kind of random violence, with shootings in a public area, is a sign of a very savage and vicious violence. We are determined to stop this organised crime gang violence once and for all and we will put in a massive police presence,” says Police Director Anne Tønnes about the shootings.

She underlines in her statement that she understands if the citizens of Nørrebro are feeling insecure due to this new gang conflict, and assures that the police will be very present in the area, there will be more patrols in the streets, not only in their police cars but also on foot in selected areas.

The aim is to be able to have a dialogue with the locals and to enable local citizens to reach out easily to the police during the evening and night if they feel insecure.

The government already voted a range of sanctions and possibilities for the police to use in their fight against the organised crime gang related violence last year in connection with the ongoing gang conflict at the time between the now banned organised crime gang Loyal to Familia (it was banned in September 2018 and the first time the police applied this new measure) and another gang.

The Danish Minister of Justice, Søren Pape Poulsen said this morning to DR that the organised crime gang measures in place – bandepakke in Danish- have given the police the tools and measures they need.

These are now being applied in relation to this new gang conflict, amongst other with the application of the visitation zone in place in one area of Nørrebro and a massive police presence in the area. Police from other areas of the city have been called in as reinforcement.

You can read more about the visitation zone and what it means in our article here: