Review of a night out at ”Shakespeare unplugged”

A slightly terrified look spread over my friend’s face when I suggested a night out watching the latest show by the English language That Theatre Company.

”I don’t know much about Shakespeare, apart from Hamlet (as most Danes), do I need to?” was the anguished answer. I managed to convince him that ”No, you don’t, isn’t that the whole point of it being ”unplugged” and not a performance of one of his plays?”

It’s played at Krudttønden, a place we had heard a lot about due to the awful and deadly terror attack there last year, but we had never been. So, after a nice dinner at one of the great and quaint eateries on Østerbro, off we went. Krudttønden is located in buildings that used to belong to the military and housed both a casern and riding hall. Since 1990 it has been a cultural centre, running more than 400 events a year.

Upon entering the theatre we had the tantalizing choice between sitting on stage – virtually tables are placed around a bar, which actually is the centerpoint of the performance, and audience is encouraged to sit ”on stage”, or sit safely on the regular audience seats. We decided to go all in on this performance and see first-hand how it felt to be part of such an unconventional concept. The bar was open, so equipped with drinks we sat right up front. 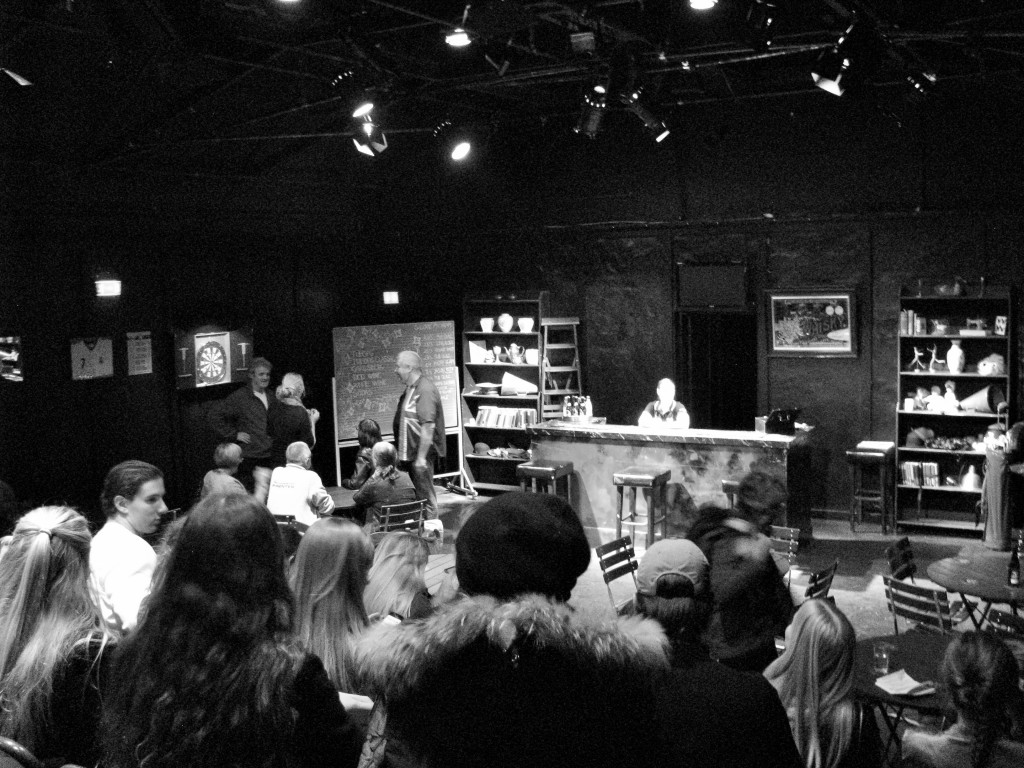 Sitting on stage is really fun and not dangerous at all!

A friendly banter is going on between two friends as they have a game of dart, and after a while we realise it’s the actors setting the stage of the play, and while we are discussing whether or not it has started, a loud shout by the female bartender (turns out she is an actor too) immediately silences the room and the play beings.

It’s an incredibly intense (and slightly intimidating) performance, four actors hold us in their grip as they take us through what was supposed to be the usual night at the pub watching a football game – something a power cut puts an end to – and instead take us on a journey using a mixture of Shakespearian verse and half-drunken banter.

The plot? Actors, Andrew Jeffers and Ian Burns, as Derek and Jon, attempt to guide the young lovesick bartender towards the woman of his dreams by teaching him old fashioned Shakespearian wooing. 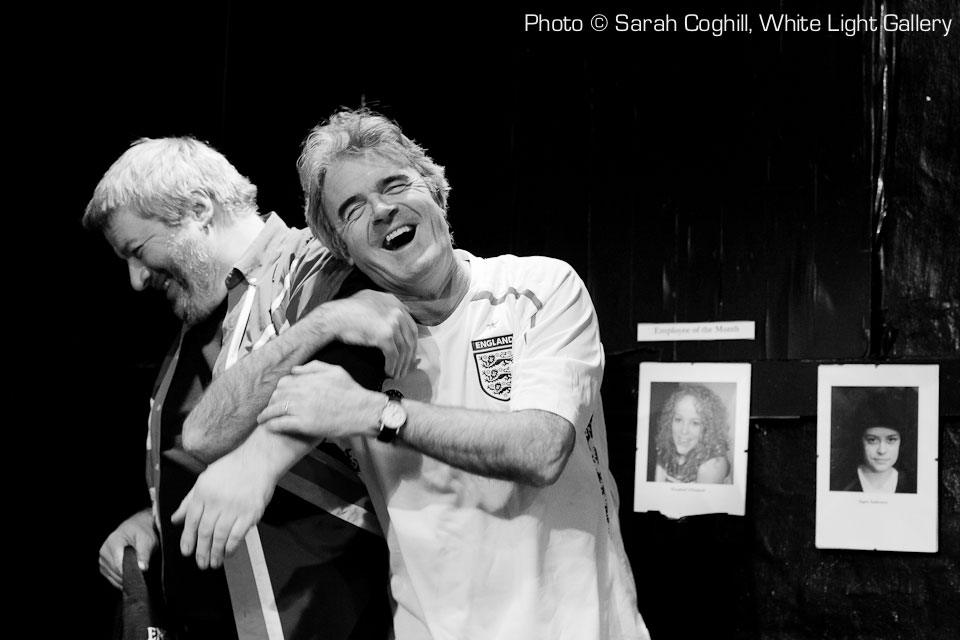 All of a sudden, instead of their shouting and drunken banter, they start using Shakespearian verse, quoting from Hamlet, Macbeth, A Midsummer Night’s Dream and more, transforming the daunting (and difficult) 400 year old English verses into modern life lessons about a man’s love for the unattainable woman.

The story and acting ends up by completely mesmerising us as we are caught between desperately trying to hear and understand the verses and having a good laugh.  The show is really a great mixture of both serious play, they can really act out Shakespeare, and a rather comic and unserious pub atmosphere.

Take advantage of this English language performance running until 19 March for a fun and different night out at the theatre. And NO, you do not have to know any of Shakespeare’s plays but you might be surprised by how much you do know anyway.

That Theatre Company – English-language theatre
That Theatre Company was founded in 1997 by Ian Burns and Julian Simpson – two English actors living in Denmark. Their focus is staging quality theatre in English presenting at least two productions a year, working with other resident British and Scandinavian actors, directors and technicians. That Theatre Company has a reputation for thought-provoking drama and entertainment. www.that-theatre.com

At KRUDTTØNDEN
Serridslevvej 2
2100 Copenhagen (Østerbro next to the Østerbro Stadion)
Monday to Friday at 20:00
Saturday at 17:00

Repremiere
Love is crazy and complex. This poetic tapestry of fun and mischief reminds us of that. When Derek and Jon are about to watch a football match between Denmark and England in their local pub, a power-cut shuts off the television so their attentions become focused on the shy, lovesick barman who needs help. Will Shakespeare’s words help him to conquer his broken heart and find new love?