Royal Copenhagen porcelain – saved by the facelift of a young designer 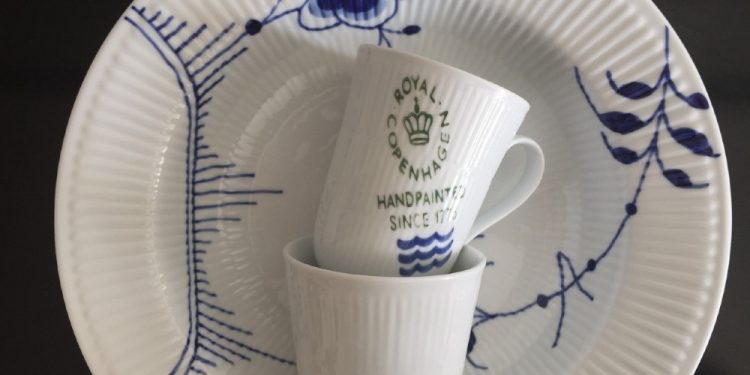 Karen Kjældgård Larsen's new design Mega Mussel was launched in 2000 in the traditional blue fluted colours. The name Mega was derived from the design, as the flowers from the blue fluted design were massively enlarged. Picture: Bente D. Knudsen

Did you ever wonder about the love affair Danes seem to have with their porcelain brand Royal Copenhagen? Outdated and old fashioned, it was saved by a young student.

What is this love relationship you Danes have with Royal Copenhagen? We just don’t get it. I can’t visit any Dane without being served on one or the other kind of that porcelain.

It is actually only a recent rekindling of the love affair that has made the 240 year old porcelain brand survive: and quite by chance.

Blue Fluted, musselmalet, the oldest design, has been handed down from mother to daughter through generations.

However, at the end of the 20th century, Royal Copenhagen was really grandmother’s porcelain and the younger generation did not necessarily want to invest in more of the same. The handed down porcelain was left at the back of the cupboard and used only for special occasions, if used at all.

It all started back in 1999, at this time young designer Karen-Kjældgård Larsen was studying at the Copenhagen Design School. She had always had a fetish for Royal Copenhagen and she had many a meal served on her grandmothers old Blue Fluted porcelain.

For her exam project she played around with the design, enlarging the flowers.

Her teacher was so enthusiastic about it that she encouraged Karen Kjældgård-Larsen to show her design to Royal Copenhagen.

A rather hesitant Karen finally did so.

Her designs divided the management of Royal Copenhagen at the time. Some found it deeply unsettling and disrespectful, while others found it refreshing and worth a try.

According to former employees at Royal Copenhagen, the decision whether or not to launch such a design wasn’t undertaken without many internal discussions.

Luckily for Royal Copenhagen, those who found it innovative and worth a try won the internal battle.

The name Mega was derived from the design, as the flowers from the blue fluted design were massively enlarged.

It became a huge success and later, when it was launched in black (which was an important break from the traditional blue colours), Royal Copenhagen’s important 21st century face-lift of grandmother’s old porcelain was on its way.

Royal Copenhagen Online Spring sale: save up to 25 percent until 5 April 2020 with free delivery. Only from their website here.

I remember during those years how friends and family would start mixing their old inherited parts with the new designs, using the porcelain more frequently, and suddenly, their young teenagers became interested in Royal Copenhagen again.

When the financial crisis in 2008 hit Royal Copenhagen hard, their managing director, Mads Ryder, was inspired to save the company by the way their customers had been mixing the new and old designs and he launched a less expensive range of basic white porcelain under the brand White Fluted.

It became extremely popular and a young generation of consumers started collecting and mixing it with the other Royal Copenhagen designs, new and old.

Following the trend to individualise, to want to make your own personal design, consumers mix and match porcelain in the same colour tone, or combine it with white elements, thereby completely individualising their table setting.

Royal Copenhagen once again became profitable and it remains the leading brand in the Nordic area for hand painted porcelain.

Being able to mix and match their grandmothers’ inheritance with new pieces from all price ranges from the various designs is really the explanation for the Danes’ love affair with Royal Copenhagen.

As an expat you might be interested in buying items from Royal Copenhagen at their factory outlets – easily accessible and open daily.

Here you can buy 2nd quality products (often you cannot see what is wrong) as well as discontinued items at special prices.

Closed at the moment due to the coronavirus.

Royal Copenhagen, Den Kongelige Porcelænsfabrik was founded in 1775 by the Danish Royal Family and the first dinner service musselmalet, Blue Fluted, was created.

In the 1990s, the company was owned by Carlsberg under the group name Royal Scandinavia (together with Georg Jensen and Holmegaard glass-works).

In 2012, Royal Copenhagen was sold to Finnish Fiskars and is now part of their home business area together with brands such as Arabia.

When Georg Jensen was sold a few years later, it meant the end of the Royal Scandinavia brand and the Danish ownership heritage.