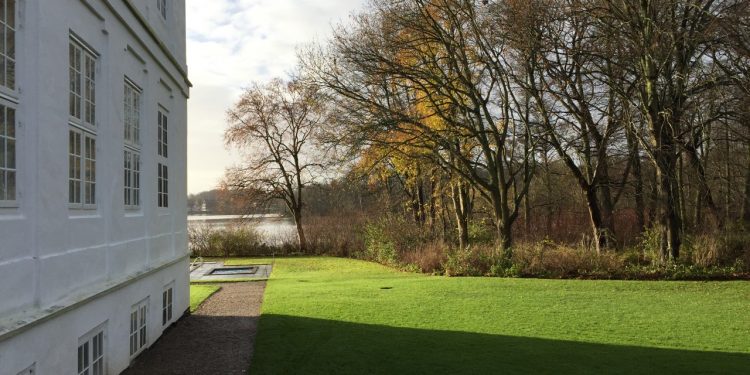 Gråsten Castle is one of the castles put at the disposal of the Danish Royal Family. It is located in South Jutland, and is quite a small gem, the park is open for visits most of the year. Picture: Bente D. Knudsen

Most castles used by the Queen and royal family are owned by the Danish State. Exceptions are three residences which are the Queen’s personal property; Marselisborg Slot, Château de Caix in France, and the royal hunting lodge in Jutland at Trend.

The State-owned castles occupied by the Queen and other members of the Royal Family as their private living quarters and for representation are; Amalienborg, Fredensborg, Gråsten and the hunting lodge Eremitage Slottet.

The actual Christiansborg Castle was never used for living quarters; instead, the apartments, designed as royal living quarters, are used by Statsministeriet, the Prime Minister’s Office. Only the Royal Reception Rooms are used by the Queen, for state visits and official matters.

Unlike other royal families in Europe, the Danish royals aren’t wealthy as such.

Their main source of income is the appanage (royal provisions) granted by Folketinget (the Danish Parliament) every year as part of the state budget.

Royal stewards, in Danish ,slotsforvalter, are employed by the Agency for Palaces and Cultural Properties (Styrelsen for Slotte og Kulturejendomme) and their job is to act as go-betweens for matters concerning the Danish castles put at the disposal of H M. Queen Margrethe II.

The position is important as the royal steward can address the Queen directly, concerning any renovation and maintenance matters regarding the castles she uses, avoiding paperwork and bureaucracy. “It’s much quicker that way,” a royal steward explains.

Paying for maintenance
The interior of the castles, where they are “tenants”, the Royal Households have to maintain themselves, but all exterior and major renovations are undertaken by the State, as was the case at Amalienborg.

Here, the Queen’s palace had the roof changed and at the same time fire safety improvements of the roof construction were undertaken, as a roof fire can seriously damage the whole palace. Total costs of the renovation works: DKK 35 million.

How do they manage to furnish them all?
Another important task for the royal stewards is the registration of all state owned inventory used by the Queen to furnish the castles.

Old lists of everything, from teaspoons to paintings and carpets, the number of items ranging between 50,000 to 60,000, have to be transferred to a computer-based register.

The inventory used by the Royal Households to furnish their residences can be either private, owned by the State, or part of the Kongelige Danske Løsørefideikommis.

For instance, the Crown Prince Silver, used by the actual Crown Prince Couple Frederik and Mary, also comes from the fund and has been put at their disposal by the Queen.

Christiansborg Castle has much to offer in terms of public visits as it comprises not only the Queen’s Royal Reception Rooms, but also the Royal Stables, the castle ruins of Bishop Absalon’s Castle from 1167, the Supreme Court and the Folketing.

While it can be visited all year round, some venues are subject to the Queen’s usage or other public functions.

A good time to visit is during the weekend, and you can easily spend a whole day there. Hopefully Danish museums will be able to reopen in the spring. Once they are you can find more information and opening hours at their website, also in English, www.christiansborg.dk.

Amalienborg is the winter residence of the Royal Family, situated between the city and the harbour, where, in the 1750s, architect Nicolai Eigtved designed four palaces surrounding Amalienborg Palace Square, with its equestrian statue of King Frederik V.

The palaces were originally built as residences for four high-ranking aristocrats; but when the old Christiansborg Palace burnt down in 1794, the Royal Family was able to buy, first one, and later, the remaining three palaces.

Today, they are all owned by the State. Each palace is named after the first monarch to reside in it.

FREDERIK VIII’S PALACE is the official residence of Crown Prince Frederik and Crown Princess Mary and was extensively renovated from 2004 to 2009 before they moved in.

CHRISTIAN VII’S PALACE, which was built in 1750–54 for Count Adam Gottlob Moltke, is Queen Margrethe’s palace for guests and official receptions. It forms the setting for events such as the annual New Year’s Banquet. None of these three palaces are open to the public.

A raised flag at the top of any given palace shows which royal is in residence. Each royal member has his or her own flag, and, as is custom in Denmark, each individual Dannebrog is raised at sunrise (though not before 8:00) and taken down at sunset.

The only palace at Amalienborg open to the public is CHRISTIAN VIII’S PALACE, which features, amongst other things, the Amalienborg Museum and the Royal Reception Rooms.

Here, you can take a royal journey back in time through the private chambers of previous kings and queens and gaze out of the windows with almost the same view as the Royal Family across the square.

The museum explores the history of the Danish Monarchy over the past 150 years, and introduces visitors to the daily life of the Royal Family today.

The Queen has already taken up residence at Fredensborg Castle, which means that the royal guards have also moved there for her protection. Her flag is be flying from the top of Fredensborg Castle instead of Amalienborg.

The palace by Lake Esrum in northern Zealand is the Royal Couple’s most frequently used residence in spring and autumn.

The beautiful rooms and halls often provide the backdrop for state visits and royal events.The Crown Prince Couple also have a summer residence at Fredensborg in Kancellihuset, just next to the main building of Fredensborg Palace.

The Fredensborg Palace’s gardens are open to the public all year round. It is one of Denmark’s largest historical gardens, with light, space and plenty of places to have a picnic.

There are surprises around every corner, including The Balloon Park, Queen Ingrid’s colourful shrubs, and The Valley of the Norsemen.

The garden was established at the same time the palace was built, but was re-landscaped in the French Baroque style by Nicolas-Henri Jardin from 1759–65.

During the summer Fredensborg Castle is open to the public for guided visits.  The opening of the castle is a result of the Royal Family being in residence in Jutland or in France.

At the two royal residences in Jutland, Gråsten Slot and Marsellisborg Slot, only the gardens are open for public access; from the gardens there are stunning views of the castles, but no access to them.

Gråsten Slot
Throughout her life in Denmark, Swedish-born Queen Ingrid (the late mother of the present Queen Margrethe) enjoyed being surrounded by her family at Gråsten Palace.

In 1935, she married Crown Prince Frederik, later King Frederik IX, and they were given the right to use the Palace and often did so during the summer. There have been several palaces on the site.

The present buildings date back to 1759, and are now at the disposal of her daughter Queen Margrethe II. The Crown Prince couple also use it extensively during several weeks in July.

The garden is an English-style landscaped garden that sits beautifully and naturally in the countryside of southern Jutland. During the summer season, extensive beds of roses and perennials bloom with a wealth of colours.

Read also our article on the Royal Hunting Lodge in Dyrehaven,North of Copenhagen,  which we hope will be able to open as usual during July and August for guided visits. At present (April 2022) renovation work is taking place and we will update our article as soon as we have more information concerning when visits will resume.

We hope that you enjoy the information, insights and inspiration that we provide. We are a small team and we would like to keep delivering high quality, interesting articles for you to enjoy and your support will help Your Danish Life to continue to produce relevant content for expats in Denmark.
We do not want to put up a pay-wall, so we need your support and if you find our content relevant and worthwhile, we would value any contribution, however big or small, as a token of your appreciation of our efforts.