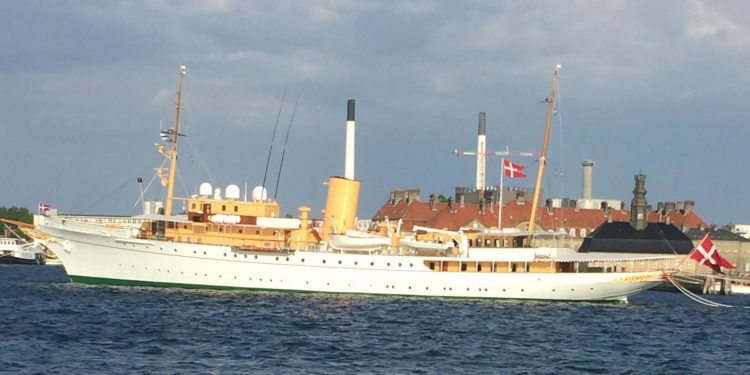 Dannebrog as she lies anchored in Copenhagen Harbour next to Holmen, the Danish navel base. Picture: Bente D. Knudsen

On 4th May, Danish Queen Margrethe will board the royal yacht Dannebrog from the Royal Navy site on Nyholm.

The beginning of the royal cruise season is celebrated in style.

The royal cruise season is when, during the spring and summer season, the Queen and Crown Prince couple use the royal yacht to visit Danish towns.

This year the Queen will set sail to Helsingør, the island of Anholt, to Aarhus and later in September she will visit Lolland and Slagelse as well.

Until leaving the harbour for the official beginning of the season, the Royal Yacht is anchored in the port of Copenhagen just outside of the Royal Navy’s base on Holmen.

This year, the Danish Queen will sail from Esplanaden in her small motorboat out to the yacht where she boards the ship at 11:00. Dannebrog leaves the Copenhagen Harbour at 11:30 direction Helsingør, where the Queen disembarks at around 15:30.

Loud bangs will be heard as the navy salutes the yacht by firing off their cannons from Batteri Sixtus – part of the naval base on Holmen.

Upon arrival at Helsingør around 15:00, the cannons at Kronborg Castle will salute Dannebrog.

Dannebrog officially belongs to the navy but is put at the royal family’s disposal for six months every year.

This is an annually recurring event and called “Officiel Ombordstigning på Dannebrog.”

The first trip this year will be on the 1 June when the Danish Queen visit Helsingør and then continues on to the island of Anholt and from there to Aarhus. In September she will visit Lolland, Slagelse and also Frederiksberg according to the official press release from the Royal House.

Dannebrog was built in 1932 at the then existing shipyards of Copenhagen (Orlogsværftet), this more modern ship replaced the former one in service until then; the old Dannebrog dated back to 1879.

The yacht has a crew of 55, all of them naval personnel as the ship is officially part of the Danish naval fleet. When in official use, a further staff of 27 from the Royal household and up to 14 passengers are added to the crew.

The yacht is is 78m long and 10m wide. Dannebrog has visited most Danish seaside towns and harbours, and sailed to Greenland, Britain, Norway, Sweden and even Greece to act as royal residence for the Danish royal family’s many trips around Denmark and abroad.

The Queen’s cruise in 2022 is planned to start on 1 June 2022, until then Dannebrog can be seen on cruise along the Danish coasts while the new recruits practice on board.

In this movie, viewers are taken on a tour of Dannebrog – it is all in Danish – but the pictures are great and you get a chance to see the royal yacht from the inside as well.