Service in an equal society – the Danish case 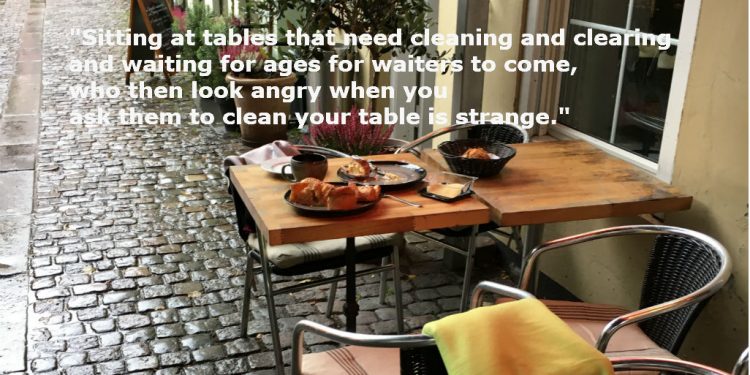 A post on Facebook among expats in the Aarhus area about service met with a huge response. The most recurrent themes were long wait times, disinterest and unhelpfulness. Picture: Bente D. Knudsen

Are you finding it difficult to get good service in shops and restaurants in Denmark? And what is good service? Our expat writer looks at the challenges of the Danish service industry in a society of equals.

Two friends, enjoying a beer on a terrace in Aarhus Midtby: one of them gestures to the waiter.

Finally, the waiter comes over and one of the friends asks for two more beers.

You have to order them yourself at the bar, says the waiter. But why? the patron asks. Because I say so, he answers.

This is just one example of what expats experience as an ongoing source of irritation and sometimes amusement: the service in Danish café’s, restaurants and shops, or rather, the lack of service.

A post on Facebook among expats in the Aarhus area about service met with a huge response. The most recurrent themes were long wait times, disinterest and unhelpfulness.

Long wait times suggest that managers fail to hire enough personnel and that those hired are either overworked or working inefficiently.

Some seem to be not interested in their customers, but more in having a ‘hyggelig‘ time together (or with their smart phones) at the expense of both customers and shop owners.

Serious questions are not answered or answered brusquely (see above), or with the unhelpful ‘I don’t know’.

Yet, the overall impression of Denmark’s service industry tends to be favourable.

Many mention that most of the time they are being helped in a friendly way.

So, in general, service is fine – as long as it is about standard things.

But expats tend to have ‘complicated’ questions.

Once you come with a question that is outside the standard way of doing things, there is a chance you will run into the Danish wall of disinterest and unhelpfulness.

Why service is often standardised instead of outstanding find out more below.

Danish entrepreneurs in the service industry are acutely aware of the situation – and how it hurts their business. Since 2013, they have been running the ongoing NICE: New Innovative Customer Experience project.

Here businesses, trade unions, employer organisations, Roskilde University and other schools within the tourism sector, try to turn around the Danish ‘functional’ mind-set. Started in the Copenhagen area, NICE is now spreading its activities all over Denmark.

Karen Brosbøl Wulf is leader of the project and recognises the observations.

“The Danish working culture is focused on functional, standardised service, what some people might think of as robot-like. We are working on that. We want to turn the sector’s mind-set around, from the functional towards a more personal, proactive and welcoming approach.

Actually, it is the detail, which matters the most. In Tivoli for example, the people who validate tickets have about ten seconds to establish contact with a visitor, ‘reading’ and anticipating their needs and wishes. This may seem like nothing special, but it contributes to visitors’ feeling of being welcome.”

It is all about seeing the customer as a person.

“And about daring to bring yourself into the game as a person,” adds Karen Wulf.

“Doing so, it also means that waiters or shop assistants are more open towards customers, who are asking them things outside their immediate competences, or when a mistake is made, or a misunderstanding arises.

Obviously, the people on the floor make the difference, but they need backup and encouragement from their colleagues and the management to make it really happen.”

Did you know that it is polite to be rude? Find out why below.

Why is being rude being polite?
Dennis Nørmark, Danish cultural anthropologist and author, recognises the image of disinterested Danes.

“People from more extroverted cultures suffer in the cold Scandinavian culture. But the Danish stand-offish attitude, which to foreigners seems like coldness or disinterest, is in fact Danish courteousness.

They are being civil by leaving you alone. So, it is up to you to decide whether you want to use someone’s services or not. In other words: you need to be proactive in Denmark.”

This also applies to the problem of the blank stare and the answer to end all service: ‘I dont’ know. I can’t help you. That is how the rules are’.

“Don’t be fobbed off,” suggests Dennis Nørmark. “Be proactive and ask if there is someone else who can help instead. Insist!”

The brusque way of treating people, no time for chitchat, and being blatantly direct, is yet another expression of Danish courtesy says Dennis Nørmark.

“It is not polite to waste someone else’s time, so that is why Danes sometimes come across as rude and wanting you out of their way.”

Not to be ruled out is also the influence of Janteloven, the code for Danish social behaviour, which says that everyone is equal and that no one should think that they are better than someone else.

“Danes are uncomfortable with situations where people are unequal,” says Dennis Nørmark.

Or rather, where people are subordinated to others, which is typically a customer situation.

He also thinks that Danes prioritise price over service.

“Denmark is an expensive country to live in, so Danes want the most value for their money. Service comes in second place. This is also the reason why they do so many jobs, such as cleaning, themselves.”

What would be his advice to expats?

“Do like the Danes: complain! And don’t be afraid to be a little bit rude. Insist on what you think you are entitled to!” he recommends.

The influence of Danish culture: Janteloven. Find out more below.

Turn around Janteloven
It also means turning around the Danish Jantelov-mentality.

“Danes feel deeply about people being equal. This is what explains their informality towards everyone. I think that we in the industry should embrace this aspect of Janteloven as a strength. As something personal and authentic that gives all customers a good experience,” Karen Wulf says about the service industry’s efforts.

Language and cultural differences play a role too. People assume that they will get by in English, which they usually do.

But they underestimate that both Danes and foreigners might feel a little overwhelmed in having to communicate in a language that is not their own – especially when something non-standard comes up.

The mutual fear of stepping out of one’s comfort zone can be bigger than expected.

Moreover, foreigners may be equal, but they are not the same, which may cause noise in the communication channel.

“Language and cultural differences are not our immediate focus,” Karen Wulf says, “But we are on the right track and there is still a lot to be done!”