Shopping for your daily groceries – how to navigate the maze 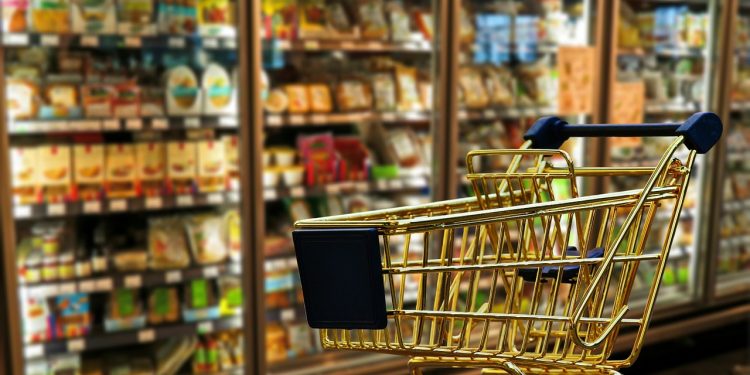 In this short guide, you will find an overview of what the market looks like, who the main players are and how you can shop smart to reduce the cost.

Apart from the classic mistake of buying yoghurt instead of milk, getting used to the Danish prices, very high many find, and the general lack of selection and variety, can be quite a challenge.

Find our guide below.

Upon moving to Denmark, one new adjustment is certainly dealing with your daily groceries and household supplies shopping.

If you find Danish prices high, you are possibly not surprised by the European Price Index Statistics, which place Danish food prices at the very top of the 15 EU countries Danes normally compare themselves with, as well as at the top of all 28 EU countries.

The general food price level is at index 130 of a European average (all 28 countries) set at 100 ( excluding alcoholic beverages).

Compared with, for instance, France (at index 116) and Germany (at index 102), and even a small EU country such as The Netherlands (index 101), Danish prices are certainly in a league of their own.

For bread and corn products – a Danish passion – the level is even higher and, with an index of 152 Danes certainly do not benefit much from being such enthusiastic bread eaters.

However, it does seem that a couple of countries are surpassing the Danes, with levels being higher for some food categories according to the European Price Index, for instance; fruit and vegetables take Denmark (index 117) to a seventh place after Finland (index 129), France (index 127), Austria (index 126), Ireland (index 126), Sweden (index 125) and Luxembourg (index 119).

For many years, Danes have been notorious for trying to spend as little as possible on their groceries (maybe due to the prices) and shopping at discounters or scanning the “tilbudsaviser” is a national sport.

Shopping across borders is also common. For instance, Danes living in mid and south Jutland are quite used to driving to German outlets, as prices there are much lower than in the Danish ones because of the lower German VAT on food compared to Denmark’s 25 percent.

However, you may not be fortunate enough to live close to the border and instead have to deal with what is available in your neighbourhood.

In this short guide, you will find an overview of what the market looks like, who the main players are and how you can shop smart to reduce the cost.

Find our guide below.

What does the market look like?
The Danish grocery market, in Danish dagligvarehandel, is a market of DKK 100 billion.

For several years, the market has been stable, even slightly decreasing according to Danmarks Statistik.

One reason for this development is believed to be the increase in spending on restaurant visits and takeaways; money spent on a meal not cooked at home is not spent shopping in the supermarket.

A characteristic of the Danish market is the very large market share of the discount chains.

Since the financial crisis, their share of the grocery market has risen to 40 percent and Danes from all social groups shop for daily groceries here.

However, according to Danmarks Statistik’s latest figures, the discounters’ share of the total market has not grown since 2016.

Also, the last couple of years the rest of the sector’s players (regular supermarkets and kiosks) seem to have managed to stop their decline in market share, which up until 2016 had fallen by more than 14 percent in the preceding years.

Another new trend in the market is a move towards more convenience as Danes look for easier shopping solutions for their meals and groceries; eating out, food boxes, home deliveries and takeaways.

Shopping online has been growing steadily, even if the sales of groceries through on-line shopping only have an estimated two to three percent share of the total market.

Although online sales and the digital opportunities have become a new battleground in Denmark, not all of the market players are entering into the expensive home delivery market, and even the fastest growing on-line delivery company, Nemlig.com, is running at a loss according to sources close to the industry.

Instead, both Dansk Supermarked Group and COOP are more interested in the concept of “click and collect”, also known internationally, which Bilka introduced in 2017 as their Bilka To Go.

With a stable or slightly declining grocery market, growth comes from gaining market share from the competition.

Dansk Supermarked Group has since 2018 reduced the price of more than 2,000 products in their Føtex supermarkets within the categories of meat, vegetables and fruit, a reduction of between 17 and 34 percent in an effort to strengthen their position on the Danish market.

Who are the players?

With no large international players in Denmark, the grocery sector is dominated by the three main Danish/Scandinavian groups with several chains, a Norwegian group with just one discount chain, and two smaller German supermarket chains active on – or at least grouped under- the discount market.

The two dominant groups, COOP and Dansk Supermarked Group, are constantly battling each other for market share; they are by far the largest, each with a share of up to or slightly more than a third of the total market.

They have also recently acquired the online home delivery service SkagenFood (delivery of fresh fish and a small selected range of fresh fruit, vegetables and meat) enabling them to enter this type of convenience market.

There are 18 Bilkas in Denmark, mostly located far outside the city centres and not very close to, for example, Copenhagen City Centre or the residential suburbs north of Copenhagen.

Their 98 Føtex supermarkets compete with the supermarket chain MENY owned by Dagrofa as well as both of Coop Denmark’s SuperBrugsen and Kvickly chains.

COOP Denmark has 1,200 supermarkets and is also stepping onto the online and home delivery market after acquiring Catering Danmark, a company that delivers food boxes as well as corporate lunches and party food.

It is owned by its 1.6 million members and is organised in the cooperative structure of COOP Amba, a Danish/Swedish group.

For COOP Denmark losses have been made for the past six years in their discount chain Fakta as well as for Kvickly.  Fakta has been battling with generally bad locations of their discount shops and over the past two years more than 80 Fakta shops have closed.

COOP’s chain of supermarkets under the Irma  and SuperBrugsen brand, on the other hand, are doing well.

With a large network of in-town shops with good locations, it has focused increasingly on having a minimum assortment of high quality products, as well as a large selection of organic produce with an increasing local sourcing focus for fresh vegetables and fruit.

Dagrofa is the owner of supermarket chains Meny and Spar and, until 2017, they also ran a chain of supermarkets under the KIWI brand name. After losses, KIWI closed in 2017 and their locations were either sold (Dansk Supermarked picked up a range of the locations), or transformed into new Meny or Spar outlets.

Dagrofa, which for many years had wholesale and food service as their main business focus, is owned by three different partners; Norgesgruppen (49 percent), KFi-erhvervsdrivende Fond (41 percent) and independent grocery owners (10 percent).

Reitan, a Norwegian group, is another Nordic player on this market. In Denmark, Reitan owns the discount chain Rema 1000 with 273 Rema 1000 shops as well as the 189 kiosks under the 7-Eleven brand name.

Rema 1000 shops are run on a franchise basis and Reitan has the ambition of opening up to 400 Rema 1000 shops in Denmark. The name 1000 is derived from the 1,000 stock-keeping units sold in their shops.

Other players are the German discounters Aldi and Lidl – who are still small in terms of market share.

Read more about the discount market below.

The discount groceries market
With a 41,2 percent market share of the Danish grocery market, a large proportion of the Danes’ total groceries shopping basket is bought at the discounters, and the development has been notable for the past 10 years, when in  2007 discounters’ market share was “only” at 28,8 percent.

A range of discount chains battle fiercely over market share, however, for some years, the discount chain Netto, owned by Dansk Supermarked Group, has been the market leader.

Shopping discount is the new normal in Denmark and no longer seen as the bad boy in the class.

“In Denmark it has become something quite common and normal to shop at a discounter. When Netto was first launched many people took more fancy shopping bags with them, such as IRMA bags, when they went shopping – thus being able to put the cheap goods into a higher end brand bag. But now many discounters have very good quality brands and products, and some of the renovated discount shops are even better looking than traditional grocery stores. Therefor many consumers no longer perceive them as discounters but just as super markets,”retail expert Dorte Wimmer said to Berlingske Business.

Netto aims to further expand and consolidate its position as the absolute discount market leader in Denmark, growing to more than 500 shops.

The new shops are to be designed differently, with a visual facelift and a restructuring of the way the shops are organised, CEO Per Bank told Danish newspaper Jyllands Posten in an interview.

He believes that: ”Customers want a better shopping experience also in the discount sector.”

Netto’s brand extends to other European markets, and in the Swedish Netto test shops, a 30 percent rise in turnover was seen in those that had had the facelift.

If you have ever shopped in Netto or Fakta, you will know that discount shopping is not a pleasant experience.

The shops are messy and badly structured, and the selection of brands very limited, products are often store in cardboard boxes rather than on shelves.

In Netto, the section with special offers called ”Spot Varer” takes up 40 percent of the space in a very disorganised way.

According to Per Bank, this will all change over the next couple of years in Netto as the facelift is phased in.

TIPS – how to get cheaper groceries

The most important rule: You cannot get all you need in one shop, you also have to shop at the discounters – many Danes get their basics here and shop for other grocery items at one of the regular supermarkets or go to a speciality shop.

Read the tilbudsaviser and take note whenever there are deals to be made on brands you normally buy. Every supermarket has them – the offers are based on sales for a week – typically starting on a Saturday and ending Friday if it is not a special weekend offer.

There are savings to be made:
The newspaper Søndagsavisen found Bilka to be the cheapest for a selected range of brands in a May 2017 test. For the same items bought on the same day in May, a consumer could save DKK 75 in Bilka compared to other retailers such as SuperBrugsen, Kvickly and Føtex. However, the savings in Bilka were less compared with Rema 1000 (DKK 9) or Netto (DKK 8). Price wise, Meny came in the middle and was DKK 45 more expensive than Bilka.

Buy larger quantities at lower prices and split with friends.

NORMAL is a new chain selling hair products, body care products, cosmetics and other household supplies in competition with Matas and the supermarkets also selling these items. They are able to compete on price by parallel importing brands and products from large wholesalers outside Denmark. The pressure they have put on prices is beginning to be reflected on some items in supermarkets and at Matas, but not for all items, so it is worthwhile to check them out too.

Coming to Denmark as an expat means having to deal with a culture that is not your own, and that can be a puzzling experience …

Live Music – Experience the entertainment side of Denmark’s NIGHTLIFE