Spread much too high in the Copenhagen Western District 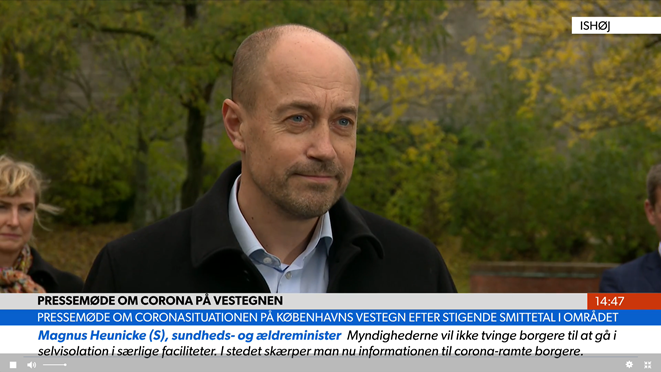 Of the top ten most infected municipalities, nine are located south west of Copenhagen City centre. Action must be taken to get the numbers down the authorities announced at a press meeting today.

The Copenhagen Western District, in Danish “Den Københavnske Vestegn”, encompasses 418,000 citizens, many of them non-ethnic Danes and many of them bilingual citizens.

The rate of spread has tripled even quadrupled in some of them over the past four weeks, primarily amongst citizens aged 30 to 39 and 50 to 59 and amongst young children.

“There is a substantial overweight of nonethnic Danes in the figures,” Thyra Krause from the Danish Institute of Infectious Diseases, SSI, said at today’s press meeting in Ishøj.

“The way the virus is spreading amongst these age group shows us that we are talking about young families and also grandparents thus citizens who often live together in large families in small apartments”.

A task force comprising the municipalities involved, 10 of them, as well as the Danish State’s health authorities is to come up with solutions quickly to get the spread down.

“One of the issues discussed,” Magnus Heunicke said, “is to encourage a more widespread use of the self-isolation facilities which the municipalities have at hand but which are not being used by the residents.”

At present the self-isolation facilities are not mandatory to use but a service made available for residents who do not have the possibility to self-isolate in their homes.

Ensuring more information about this service, and how to use it, is one of the tools which will be used to curb the spread in the area as well as more encouragement and information about the importance of using them even if it means separation from their family for a period of time, Søren Brostrøm from the Danish Health Board said was one of the things the Danish Health Board would take home from the meeting today.

“More severe measures may be put in place locally for a short period of time,” Magnus Heunicke said. “Local restrictions have worked well in other areas such as Aarhus in August and this is part of the measures which the task force will also look at.”

Kim Christiansen, from Vestegnens Police, said that they had already had 500 interventions in the past week and that they were monitoring closely the shopping malls, DIY centres as well as the S train stations in the area.

“In general the residents are good at remembering to use a face mask but we need to remember to focus also on social distancing and hand hygiene as well,” he said.

The Copenhagen Western District, in Danish “Den Københavnske Vestegn”, encompasses 418,000 citizens, many of them non-ethnic Danes and many of them bilingual citizens.