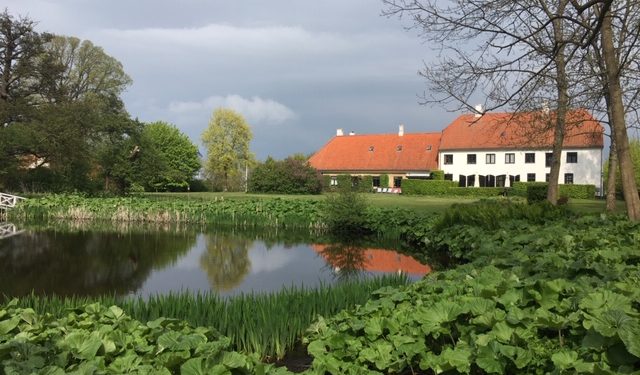 The origins of Rungstedlund date back to the late 17th century, when it was used as an inn with an adjacent farm.

On the shoreline of Øresund, only a 30-minute drive from Copenhagen, sits the Karen Blixen Museum in the quaint harbour town of Rungsted Kyst. Find here our review for your inspiration.

A friend and I took the scenic ride up the coast to spend an afternoon to learn more about the famous Danish author. Her museum is an easy drive north of Copenhagen along coastline road Strandvejen.

Baroness Karen Christenze von Blixen-Finecke is mostly known for her work “Out of Africa,” and “Babette’s Feast.” Rungstedlund, home to the Karen Blixen museum, comprises the home and gardens of the internationally recognized storyteller.

Because rain was in the forecast, we chose to explore the gardens and bird sanctuary upon arrival.

The birds were chirping as though they were singing on cue in the beautiful 14-acre gardens and grove, a forest reserve full of lush beech trees. The park is also a bird sanctuary, where approximately 40 different species breed.

The green gardens were rich in green colour due to the frequent rains so common in Denmark. The pathway around the gardens had strategically placed benches to sit and take in the botanical nature.

At the top of the pathway is a huge ancient beech wood tree which stands to cover the grave of Karen Blixen.

The garden experience was pure peacefulness.

The museum itself was once the home of the author before and after her time living in Nairobi, Kenya.

The rooms take you to a moment in time when Karen Blixen walked the perfectly placed assemble of furniture, artefacts, artwork and letters. Newly opened to the public is the second-floor bedroom of Karen Blixen which was a treat.

It was a pleasant surprise to visit and great for learning more about Karen Blixen’s literary and artistic work.

Considered one of the most brilliant contemporary Danish writers of all times, Karen Blixen gained fame with the literary series “Seven Gothic Tales” and achieved great success with her subsequent literary breakthrough, “Out of Africa” (later made into the famous Oscar-winning film).

Find out more about the story behind the museum​ below.

The origins of Rungstedlund date back to the late 17th century, when it was used as an inn with an adjacent farm. Multiple important historical Danish figures, such as writers Ludvig Holberg and Johannes Ewald, were its patrons.

Rungsted Inn closed its doors in 1803 and, after having changed hands several times, it was eventually purchased by Karen Blixen’s father in 1879.

Karen Blixen was born and raised in Rungstedlund, and after her stay in Africa, she returned to spend the last years of her life there.

In 1960, Karen Blixen helped establish the Danish Academy of Letters, and following her death two years later, the Foundation started holding their meetings in Rungstedlund.

For more than twenty years, the house remained uninhabited, until the release of the acclaimed American film “Out of Africa” led to a significant increase in sales of Karen Blixen’s books.

At that time, the board of the Danish Academy decided to use the generated income to turn the main building into a museum.

The Karen Blixen Museum at Rungstedlund was finally inaugurated in 1991.

Guided tours are available every 30 minutes, and for refreshments a lovely cafe is available which made our visit complete.

PS: Do not miss out on the lovely harbour of Rungsted Kyst, full of cafes and eateries with seats on large terraces overlooking the sailing ships, harbour and coastline.