The Danes and their bread

Have you ever entered a Danish bakery and felt a bit lost when faced with shelf after shelf of bread and cakes in all shapes, sizes, and textures? “What are they all for?” you might have asked yourself. Do not despair. Find here our guide to the Danish world of bread.

Bread is not just bread. Different occasions, meals and situations call for different kinds of bread or pastry in Denmark. Bread is an important part of the Danish diet.

We even have a funny saying including bread: “Spis brød til”, directly translates as “have some bread with that”. It it is, actually, another way of saying – take it easy/don’t overreact!

Let us start with the oldest bread.

To foreigners perhaps the strangest Danish bread is the rugbrød – rye bread. The dark, compact, whole grain brick that takes some time to chew (and even longer to digest), is actually also the oldest bread we have in Denmark.

For centuries, rugbrød has played an important role in Danish food culture. Rye was the most commonly used grain for bread until the beginning of the 20th century. In rugbrød all parts of the grain are used.

Besides providing the body with energy, the grain also contains lots of vitamins, minerals and fibres, which makes the bread very nutritious and keeps the digestion going.

Have some bark and hay!
Back in the old days, when times were tough and there was not enough rye, the Vikings used to grind bark and hay and add this to the dough. It dramatically decreased the nutritional value but was filling and kept the digestive system busy for a while with the indigestible ingredients.

Luckily, we don’t have to do this today, even though some Nyt Nordisk Køkken (New Nordic Kitchen) enthusiasts would probably find it appealing.

The king of the lunch box
By the late 19th century, industrialisation was in full swing in Denmark. Before this time, it was customary for people to eat a hot meal at home during the long lunch break. In contrast, the industrialised workforce stayed at the factory during the break and ate a madpakke, cold food packed in a lunch box brought from home.

The square, sliced rugbrød with different toppings called pålæg was perfect for this purpose. For the next 100 years, rugbrød was the king of the lunch box and today rugbrød is still considered to be the healthiest and best choice for lunch.

Smørrebrød and traditional luncheons
Even though rugbrød is mostly used for everyday “good, healthy, and satiating” fuel for the human engine, there are times when rugbrød is part of a more luxurious meal.

The Danish Smørrebrød tradition goes back to the same period in which lunch boxes were introduced. At that time, the restaurants that had previously served hot meals at noon began selling smørrebrød, open rugbrød sandwiches with highly piled toppings, to people who hadn’t brought a lunch box from home.

Smørrebrød usually consists of rugbrød with butter or duck fat, layers of sliced cold meat, pickles, sauces, vegetables, fresh herbs and so on. Rugbrød also plays an important part in traditional luncheons, where it is served with various delicious, warm toppings.

Unfortunately, the consumption of rugbrød has been dropping steadily in recent decades and lighter, less nutritious types of bread are taking over.

FRANSKBRØD – Refined and fashionable but not French

While rugbrød is an everyday bread, franskbrød, or French bread, is for special occasions where the nutritional value is not the main concern.

When sharing a meal is more about being sociable, such as the Friday morning breakfast with colleagues at work, or the Sunday morning family breakfast at home, franskbrød is the bread of choice.

Franskbrød is made with refined wheat flour. This gives the bread the white colour but also leaves it with a very poor nutritional value.

The first kinds of franskbrød came to Denmark from the Netherlands in the 18th century and became very popular amongst the upper class. At the time, Denmark was highly influenced by France and everything in fashion came from France.

Therefore, the new, tasty, and refined bread ended up being known as French bread, franskbrød. Wheat bread was only for the rich, as it was more expensive. Rugbrød became seen as working class bread.

Today you can still find white bread in bakeries and on shelves in the grocery store. As the public’s knowledge about healthy eating grows, it is slowly being replaced by a whole grain wheat bread known as fuldkornsbrød.

Being whole grain bread, fuldkornsbrød is both lighter than rugbrød and healthier than franskbrød. The consumption of it is increasing as Danes replace both rugbrød and franskbrød with it.

Over the last decade, traditional grains and different types of wheat have been revived to produce a wider variety of bread.

People are becoming aware of the nutritional value of whole grain and the many variations in taste and texture that whole grain bread can offer.

Bakeries are also giving up the industrialised bread mix that was very popular among bakers in the 1980s and 1990s. Instead, they are reverting to good old-fashioned artisanship.

WIENERBRØD – why Danish is bread from Vienna

The heavenly fragrance that greats you when you enter a bakery doesn’t come from the bread.

It most likely comes from the shelves nearest the window, where all the pastry, wienerbrød, is.

The Danish pastry tradition can be traced back to 1845, when a young Danish baker went on a trip to Vienna, at the time the Austrian capital was considered the Mecca when it came to the art of bakery.

He was very inspired by the Viennese croissants made out of yeast dough with butter rolled inside, and upon his return to Denmark, he started creating pastries using this technique, creating different types of fillings and made them in a variety of shapes.

They were to be known as wienerbrød, bread from Vienna. Rather amusing, when you think of how world famous the so-called Danish pastry subsequently has become, in some countries even just referred to as having a “Danish”.

Wienerbrød for those special breakfast occasions
Even today, wienerbrød is still an integral part of the traditional Friday morning breakfast at work and the Sunday morning family breakfast tables.

Wienerbrød is sold as both a big “cake” for sharing and in single pieces. The most traditional big ones are kringle and stang, the small ones are snegl (cinnamon snail), overskåren (cut over – a slice of a bigger pastry) and Spandaur/bagerens dårlige øje (the baker’s bad eye – a round pastry with cream or jam in the middle).

Tebirkes in a league of their own
Tebirkes (tea berks), frøsnappere (frog snappers), and croissants are made out of the same dough and technique as wienerbrød, but are still in a category of their own.

They are not quite as sweet and are sometimes eaten like a sweet bun with butter and cheese or jam in the middle. They are often served at the same occasions, as the rest of the wienerbrød, but somehow eaten with a slightly lighter conscience!

Other cakes at the bakery

Besides the above-mentioned categories of breads and pastries, there are also a range of cakes at the bakery.

On the cold refrigerated shelves, you will find the cream cakes, flødekager. They are filled with freshly whipped cream and cake cream, often topped with marzipan, fruit and chocolate. Typical ones are kartoffelkage (potato cake), gåsebryst (goose breast) and jordbærkage (strawberry cake). No worries, in the first two you will find neither potato nor goose breast – however there are strawberries in the last one!

They are delicious but extremely rich and Danes buy them for special occasions or as an infrequent treat.

Dry cakes, tørkager, are denser, small cakes that the baker doesn’t bake quite as often, since they keep for more than a day.
They are often baked with shortcrust pastry filled with marzipan, chocolate, nuts, jam and so on. Small tærter (tarts), hindbærsnitter (raspberry pieces) and træstammer (logs) are examples of these.

The dry cakes are not eaten on any specific occasion. They are good to have as a small sweet supplement with your afternoon tea with friends or at a business meeting in the afternoon.

You have probably noticed that Danes love to bake and many actually bake not only cakes but also their own bread.

Sales of yeast and flour keep growing, and every year more recipe books are published and baking classes offered. With many different kinds of good quality flour available in the supermarkets, there is money to be saved if you make your own bread..

When asked why they bake at home, the reply is that it is fun and “hyggeligt” to bake and that the home baked bread and buns taste better than the bread you buy. For some, the cost of bread is also a reason as it is cheaper to bake your own bread.

This requirement is met by having one bowl of oatmeal for breakfast and one slice of rugbrød for lunch.

However, only about 30 percent of the adult population gets enough whole grain.

To help consumers make healthy choices the whole grain logo has been introduced. It is put on bread and cereal products that meet the standards of being whole grain

In order to qualify for the Fuldkorn/whole grain logo on the package, the bread must contain 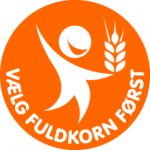 Thanks to the bakery Brodflov for letting Mayra Navarrete take pictures to illustrate the article, located at Falkoner Alle 36 on Frederiksberg – www.facebook.com/brodflov .