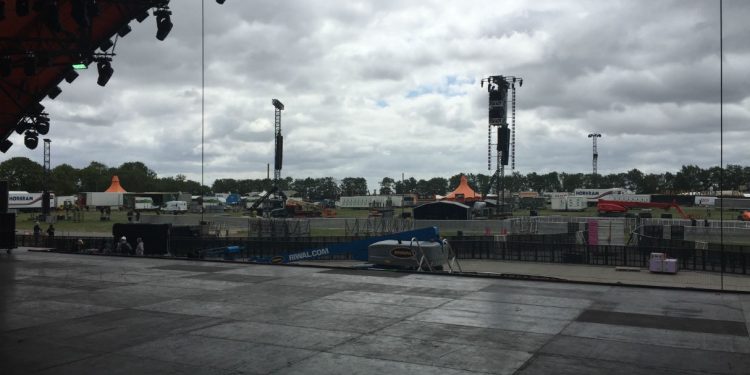 View from the Orange stage onto the field in front, the site is still being prepared for the festival as we visit. Picture: Bente D. Knudsen

Renowned Roskilde festival attracts 130,000 guests making it, in Danish terms, one of the country’s largest cities. All run by volunteers!

The press tour we have been invited to attend takes place the day before the festival site opens.

However, the camping site outside the main festival area is already inhabited by happy partying guests who have come to party for longer than the four days of music.

Inside the main festival site, the Roskilde Dyrskueplads, the activity is hectic but in a quiet and orderly sort of way.

Everyone seems to know their place and what they must do. As we inquire how this can be, the answer is simple: most of the those working are volunteers, from those building the stages, hammering away as they build a new booth or bar area, to the guards who register us and those who let us in, even our tour guides are volunteers.

A total of 30,000 volunteers make the festival possible. And many have been around for a long time.

One of our guides came to Roskilde as a young boy helping his father who supplied the tarpaulin used for the tents and booths back in the 1970s, and since then he has been a volunteer, taking leave from work to be our guide for the day.

They have all been preparing for the 2019 Roskilde Festival since the end of the 2018 festival, and they know exactly what they have to do.

A volunteer has to put in at least 32 hours of work during the days the festival runs. In return they get a free pass covering all four days of the music festival.

Roskilde does not have room for more people on the festival site, as we have a max. allowance of 130,000 from the police, we are told.

Run as a non-profit festival since 1972, Roskilde is also the largest music festival in Northern Europe.

The iconic stage, whose shape is also the brand of the festival, was bought in 1978 from the Rolling Stones. It has been expanded and renewed a couple of times; however, it keeps its construction, shape and visual orange impact.

The lighting people don’t really like it we are told, as we enter and stand looking out (a bit in awe) from the top of it.

It is too low; lighting people would prefer a much higher tent. However, the musicians and artists performing love it as the low ceiling gives the feeling and atmosphere more of a club than a large-scale concert stage.

Whatever the stage feel might be, popular musicians attract a large crowd, which is why safety is an important issue.

“And sound is important for safety”, Meyer Sound’s representatives explain. A new partnership between the American sound company and Roskilde Festival means that data is collected and analysed to optimise sound and safety for the audience.

Sound is important for safety because an audience standing at the back will push forward if they think those standing further in front are able hear better than them. A stampeding crowed is dangerous and has led to accidents – even fatal ones – as audience can be crushed to death under the mass movement.

At Roskilde Festival (and other large music events) optimising the loudspeaker system to cover a large area, putting up huge screens so those standing further away can see what is going on up front is essential.

Also, a red button on stage which immediately cuts the music, with one person responsible for pressing it if needed, is key.

“The crowed will stop pressing forward immediately if the music stops, someone needs to be responsible for making that key decision,” our guide explains.

The access to data to analyse how sound travels, how a crowd impacts sound, the way the weather plays a role (today the wind is blowing at gale strength), all these elements play together.

According to Meyer Sound, the partnership with Roskilde Festival is unique, as they are able to get much more data and information due to the non-profit element of the festival.

Roskilde is not into making money or keeping “trade” secrets, as they want to optimise and learn.

The tour is almost over, and we are treated to lunch at one of the festival’s food booths in the camping area. On our way to it we pass another food booth, run by the Roskilde Scouts.

“This food booth has existed for years, it is run by the scouts and their parents, who put in many hours of volunteering every year at the Roskilde Festival, I think those scouts have the best facilities and largest budget of all scouts in town,“ our guide tells us.

We have our lunch at the food stall of the association for muscular dystrophy. A volunteer explains how their up-scale food concept (no burgers or hot dogs), instead healthy with lots of taste, is a popular booth. The association has run it for many years, and the Roskilde Festival brings in half a million DKK to the organisation’s work.

Tickets sell out quickly and if you want to take part, for one or more days in 2020, you need to be ready to buy tickets when the ticket sale for Roskilde Festival 2020 opens in November 2019. 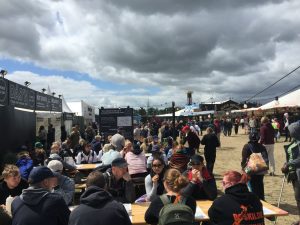