The grand finale of the Opera Festival 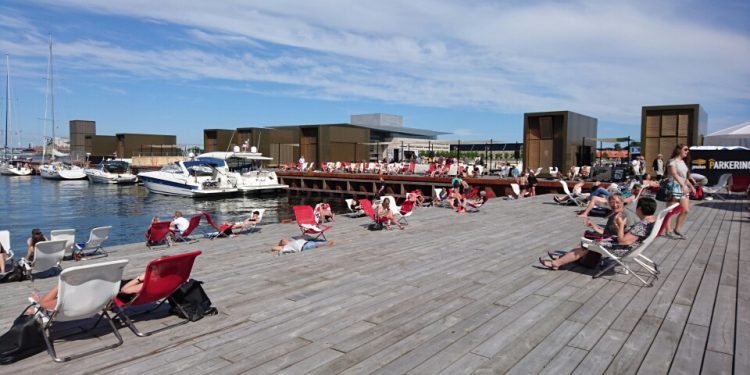 Hard to believe - but on this new square - Ofelia Plads is visible in the back of this "landing moor" , three open air operas will be performed.

The new outdoor stage virtually on the water, Ofelia Plads, located right next to the Play House, Skuespilhuset, on the waterfront of the Copenhagen Harbour, hosts the Opera festival’s three great outdoor opera performances, marking the end of the Opera Festival this year as well as the taking into possession this new amazing venue – opened only in July 2016.

The whole area around the Play House and the new square Ofelia Plads is quickly becoming THE new HUB and a must-see.

Hard to believe – but this area will host the three operas; The Marriage of Figaro, The Flying Dutchman and The Finale Concert, playing live on Friday 5th August, Saturday 6th and Sunday 7th. Weather is expected to be fine ( we hope) – and even if the events will be crowded – they are a new and unique addition to the op

You can choose to buy a ticket to be seated – or just hang around the stage area and listen for FREE to the music and play. A special discount ticket, the Ofelia Stage Pass, enables you to join all three concert events for only DKK 650. Each concert sells for DKK 240.


The marriage of Figaro is performed by international stars together with the Malmø State Opera. Mozart´s masterpiece from 1786 was his first collaboration with the librettist Lorenzo da Ponte, with whom he later co-wrote Don Giovanni and Così fan Tutte. It is a relation-drama, with features of both a bed-chamber-farce and a psychological comedy.

The performance is produced by Malmø Opera and performed in Italian. Starting at 19:00 5 August it lasts 2 hours and 30 minutes, with an intermission. The staged performance, directed by Peter Stein, will premiere on Malmö Opera’s main stage, November 12th, 2016.
The Flying Dutchman is performed in German and is a Wagner evening presented by the Royal Danish Opera. The neglected young girl Senta leads an unhappy life. In her imagination, she conjures up a mythic sea captain in an attempt to escape from her drab daily existence. But her fascination with the enchanted dream world gradually becomes a destructive obsession. For centuries the legend of the ghost ship “The Flying Dutchman” has been one of the most enduring nautical tales among sailors, for whom the spectral vessel is an omen of death, storm and shipwreck.

Richard Wagner was inspired to explore the myth in 1839 while fleeing his creditors across the stormy seas, finally taking refuge among the fjords of the Norwegian coast. The result of his ruminations was an opera about the human quest for deliverance from life’s storms.
This revival of Der fliegende Holländer showcases three Danish international names in the cast: Johan Reuter as the Dutchman, Stephen Milling as Daland and Ann Petersen as Senta and Niels Jorgen Riis, as Eric, in the lead.The royal vocalists will be joined on stage by the Norwegian Tenor Bror Magnus Tødenes, in the role as Steuermann. Accompanied on stage by the Royal Opera Choir and the Royal Chapel Choir, the opera is conducted by the Japanese-German conductor Jun Märkl, who is well known and respected for his interpretation of the classic German repertoire. Performed Saturday 6 August at 19:00 in German. The staged performance premieres at The Opera House, September 3rd, 2016.
The Final Concert will be a festival parade with soloists from the week, where the audience can to re-experience the greatest voices and arias from the festival. Also the Copenhagen Opera Festival Honour Award will be awarded for the second year in a row. The award of DKK 25,000 will go to a person who, throughout the years, has made a significant mark on the Danish opera scene and who has contributed to an increasing public interest in opera. The concert takes place 7 August at 19:00 and will last one hour and without an intermission.The Finale Concert is produced in collaboration with Malmö Opera. No information about language – but the host most likely will be speaking in Danish, whereas the performances will be in their original language.