The lamppost fight starts on Saturday 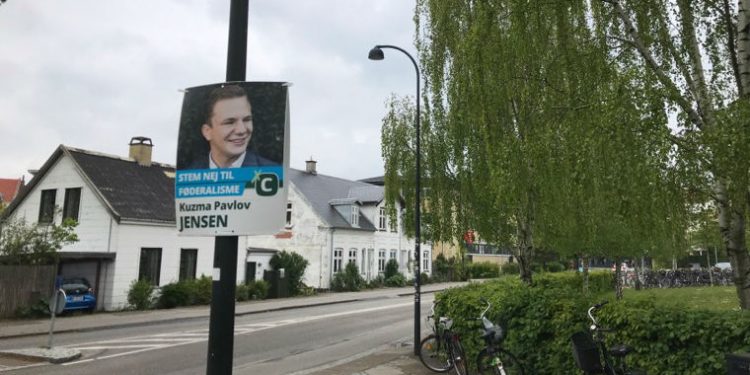 As of Saturday 11 May, this EU election poster will be joined by Danish General Election posters. Picture: Niels Peter Lindegaard

You might be surprised that with general elections announced the streets still seem bared of posters and election placards. However, that is about to end.

In Denmark the use of outdoor posters, glued onto cardboard making it possible to attach them to lampposts along the main roads, is important during election time.

The fight to get the best lamppost, namely the one making your election poster the most visible to as many local constituents as possible, will start on Saturday the 11 May at exactly 12:00.

Danish election regulations only allow election posters to be hung up four Saturdays prior to the election date.

As the general election was known to come this spring, most parties and candidates have had theirs lying around waiting for the date to be set, and now that it has been, they have to wait patiently for Saturday to come.

At the end of this weekend you will see them hanging all over the cities and along the main roads.

If you are on your bicycle, you may have to be extra careful, sometimes they do hang a bit low and stick out as you ride along. You will see the most popular lampposts hung with several different ones.

Of course, there are rules. It is forbidden to hang placards lower than 2.10 meters, or to hang them so that they cover official (traffic) signs or lights.

All parties and candidates engage in planning, including routes for where to hang theirs.

This also serves another purpose: all placards must be taken down within ten days of the elections so running the initial routes, but then in reverse, makes sense. Every placard that is still hanging after that date costs the party about DKK 500 each.

According to Rune Stubager, professor of political science at Aarhus University, and a frequent commentator in Danish media, the placards do not have decisive importance for the elections themselves.

“But they ( the posters9 do have great significance within the political parties: the highest number of personal votes is decisive for winning a seat in Folketinget. So, it’s not only a competition between parties, it is to a large degree a competition within parties as well.”