The Queen’s horses and the Royal Stables 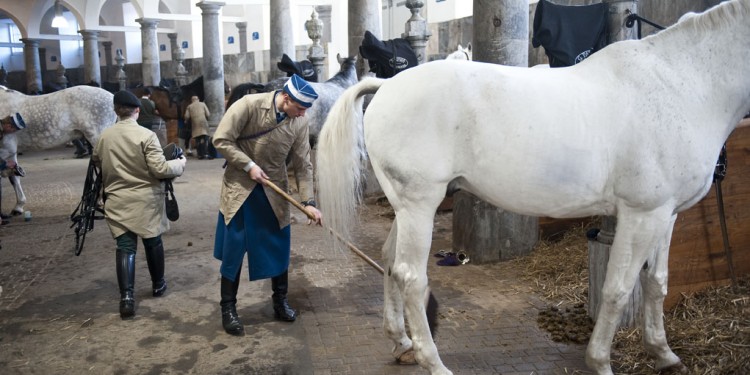 When the Queen's mounted guard is in town, Gardehussarregimentet, the stables fill up. Picture from a past event by Christian Lindgren.

Being an old Kingdom also means maintaining old traditions such as the upkeep of a royal stable more than 300 years old; a visit a great excursion for all ages.

Den Kongelige Stald-Etat, as the royal institution is called in Danish, has been transporting the Royal family around and supplying horses for leisure and hunting activities for more than 300 years.

Their location at Christiansborg Slot dates back 280 years to 1740, when the first Christiansborg Castle, which burned down twice in 1794 and again in 1884, stood finished and the royal horses (more than 250 at the time) moved into their new quarters.

Of both fires at Christiansborg Castle only the circular buildings, the stables and the riding hall remain of the original castle from 1740.

Even today, despite the use of cars for the daily transport of the Royal Family, the royal support for the up keep and maintenance of these treasures remains strong.

The royal carriages are used for the annual New Year’s levee, special events (weddings and royal visits around the country), anniversaries, as well as the official reception of new ambassadors.

The mounted Royal Gard Hussar Regiment escorts the carriages for these events, and especially the official reception of new ambassadors, which takes place several times a year, is a great sight.

The white horses drawing the Royal Coach are Kladrubers from the Czech Republic. The first horses of that race came to the Royal Stables in 1994 on the suggestion by his late Royal Highness, Prince Henrik.

The beautiful white horses are not born white – they change from their dark colour to white when they are six-seven years old. They have drawn coaches for princely families of Europe for centuries, and since 1994 do so again for the Danish Royal Family.

The royal family is a huge supporter of the Royal Stables.

“We have always been very conscious of keeping and maintaining them, ensuring that they not only live on, but really exist with horses and carriages, and that the horses are really used for riding, with it all taking place in the beautiful old stables”

says Queens Margrethe in the book about the royal horses, “De Kongelige Heste” (Hauschildt & Nitschke, 2008), as she expresses her belief that the Royal Stables will exist also in the future.

The Royal Stables house around 20 horses and the royal carriage collection (including the Gold Coach) as well as a small museum with collections from more than three centuries of royal stable life.

She also says how pleased she is that her daughter in law, Crown Princess Mary, is so fond of horses, as she is certain that her interest and enthusiasm will help preserve the tradition.

Horses were an essential part of life and breeding the right horses for the Royal Family was important.

In 1690, Danish King Christian V formulated a new set of guidelines together with Royal Esquire Anton Wolf von Haxthausen, setting standards and enabling control of the breeding of the race Frederiksborghesten used by the royal family in their stables.

Usually there are several events each year where the public gets to see the magnificent carriages and horses and as Denmark opens again this spring these events and occasions will return. Certainly for the Queen’s postponed royal jubilee, which is to take place 10 and 11 September 2022, she will travel from Amalienborg through the streets of Copenhagen in an open horse carriage to be cheered by the crowds.

The Royal Stables can be visited Tuesday to Sunday from 13:30 to 16:00, the visit includes stables, horses and the horse carriage museum.

The ticket can be a combined one with other museums at Christianborg Castle. Guided tours are also available in English on Saturdays at 14:00.

They are great to visit and enable people to see the beautiful old buildings while getting a close look at the carriages and horses.

They give you a unique insight into the  old tradition and life form of using horses for transportation – once outside again, the contrast to modern life really stands out.

It is a delightful visit for the whole family.

The ticket for adults is DKK 60 and children below the age of 18 are free. You can buy the ticket at the stables or online.