This season – check out the many Danish microbreweries 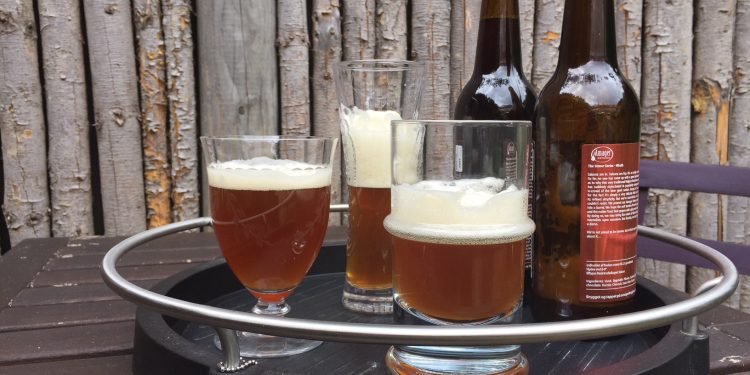 The warm season is the perfect time to venture out and about in Denmark – and why not do so while indulging in some of the great speciality craft beers to be found at one of the many recently established microbreweries.

Beer is one of the oldest beverages in the world and has been brewed in Denmark since approximately 1370 BC. Early beer was dark, heavy and often sweetened with honey. It was drunk in preference to water because at that time, the water was not always safe to drink.

Before it began to be brewed commercially, beer was brewed on a domestic scale by women for their own household’s consumption. Farmers’ wives competed with each other to brew the best beer to attract the best farm workers. This only changed after the industrialisation of brewing occurred.

Across Denmark, every town had its own brewery.

Inspired by the Germans

In 1826, the first Jacobsen brewery was established, brewing traditional ale. In 1836, J.C. Jacobsen tasted a bottle of imported Bavarian beer and he liked it so much that he travelled to Germany to learn about the different brewing method employed to produce the lighter beer. Jacobsen spent the next nine years perfecting his method and launched his first pilsner beer in 1845.

The new beer proved very popular and in 1847 Jacobsen built a large new brewery on the outskirts of Copenhagen to cope with demand. He called it Carlsberg after his son, Carl Jacobsen.

The second major Danish brewery, Tuborg, was founded in 1873. Tuborg quickly switched to brewing the lighter pilsner beer as it surged in popularity. By the end of the nineteenth century, traditional dark ales had been firmly replaced by the pilsner as Denmark’s most popular beer and it remains so today.

Breaking the dominance of the market leader

However, the tide began to turn with the foundation of the Danske Ølentusiaster (Danish Beer Enthusiasts) organisation in 1998. The group was formed to address the problem of a lack of diversity in the Danish beer market and the market has changed dramatically as a result.

Microbreweries have sprung up across the country and today there are more than 100 breweries in Denmark producing a startling variety of interesting ales.

There are now numerous alternatives to the pilsner which has dominated the Danish market since it was introduced by Jacobsen 170 years ago.

Many microbreweries offer guided tours and beer tastings. Some breweries have a restaurant where you can enjoy the beer alongside a light lunch or dinner.

Here is our guide to some of the best places to enjoy speciality craft beers across Denmark.

Bryggeri Skovlyst
Close to Copenhagen, Bryggeri Skovlyst is located in the forest of Hareskoven near Vaerløse. The brewery produces a range of beers which regularly changes according to the season and all can be tasted in the bar. Bottled beer can also be bought to take home. There is a cosy restaurant serving a range of hot dishes as well as a more casual dining area serving sandwiches and bar snacks.

All of the food is homemade and based on seasonal ingredients. The brew master collaborates with the kitchen to produce seasonal beers to complement the food. Skovlyst is the perfect place to stop and recharge your batteries after a walk in the surrounding woodland. The restaurant gets busy so it’s worth booking a table in advance.

A tour of the brewery which includes three beer tastings is held on the second Wednesday of each month from 18.00 to 19.00. Places are limited and must be booked in advance.

Herslev Bryghus
Herslev Bryghus is located in the village of Herslev close to Roskilde Fjord. Since 2013, the brewery has been producing only organic beer from traceable ingredients. You can enjoy a beer in the cosy barn or, if weather permits, on the terrace.

The brewery also has a farm shop selling beer, spirits and vinegar as well as other specialities such as freshly ground wholegrain four. The farm shop hosts regular beer tasting events and you can also arrange a private group guided tour with beer tasting by appointment. A full list of events is available in the calendar on their website.

Refsvindinge Bryggeri
Located in the beautiful Funen countryside, Refsvindinge is one of Denmark’s smallest breweries. The brewery regularly hosts beer tastings but they are very popular and need to be booked well in advance.

The brewery also offers visitors the opportunity to stay there overnight on one of their beer, bed and breakfast packages. This includes beer tasting and a guided tour, an overnight stay in a “beer hut” and breakfast in the beer hall.

Fur Bryghus
The family-owned Fur Bryghus is located on the island of Fur in the Limfjord. It can be reached by a short ferry ride from Branden. The brewery is surrounded by 128 hectares of undisturbed nature which is home to a variety of flora and fauna including hares, roe deer and pheasants.

As well as serving a range of beers, the restaurant offers hot and cold dishes made from locally sourced seasonal ingredients. On Sundays from April until mid-November, the restaurant serves an extensive buffet lunch. There are also a number of concerts and other events, full details of which can be found on their webpage.

There are of course many more to taste – for a full list of all Danish breweries including all the microbreweries the association Dansk Ølentusiaster has them all listed on a great map – here you can zoom in  and find the ones close to you or to the excursion you might be taking around Denmark.