Western Europe’s highest skyscarper to be built in Brande 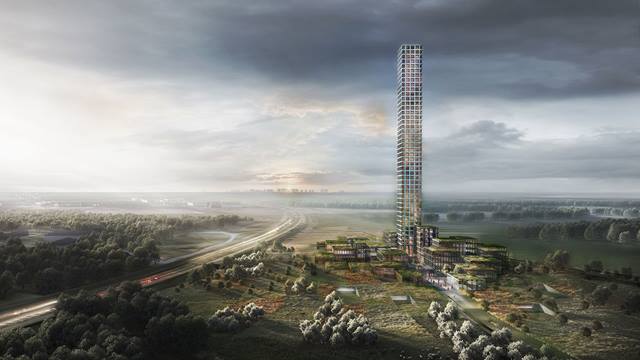 If you have never visited the area of Ikast-Brand in Jutland, maybe in the coming years, you will. Why you may ask? Because the Danish fashion group Bestseller has decided to put this area on the map.

Not just the map of Jutland, or of Denmark, no, they think big here. Putting the small town on the world map by building Western Europe’s highest skyscraper, only surpassed in height by four Russian Skyscrapers, it will be the fifth highest on the European continent.

With its 320 meters, the skyscraper will be taller than the Eiffel tower’s 300 meters (including antenna) and be part of a new Bestseller city comprising an area of around 120,000 square meters with a city of more than 30 retail shops, offices, and restaurants.

And yes, of course, even a hotel is planned as well as educational facilities. The hotel capacity is a necessity to avoid having to place meetings with international customers in cities such as Århus for instance, the group says in its project material.

The whole city will be placed out on the heath outside Brande, and at their Monday night meeting ( March 11th) the Brande city council decided to give the project the go ahead, enabling Bestseller to go further into a project planning phase, amongst other with land purchase for the new buildings.

The project is developed with Dorte Mandrup architects and the consulting group Rambøll.

Who is Bestseller you might ask?
Bestseller is by far Denmark’s largest fashion group.

Despite being a small country, the Danish Fashion industry is important to the country’s economy.

As the fourth largest export industry, when including footwear (think ECCO and Hummel), and the sixth largest without the footwear industry, it is an industry to be reckoned with.

It employs almost 10,000 people in Denmark (within design, sales and marketing), with a further 12,000 employed in the Danish retail trade.

It all started in rural Jutland (amongst other in the Ikast-Brand area), which up until the 1950s had quite a large textile manufacturing industry.

Increased global competition eventually made manufacturing in Denmark too expensive and the industry was quick to move its clothing production to low cost manufacturing countries.

In the 21st century, manufacturing and sales most often takes place outside of Denmark, however, the industry has kept its offices for sales, marketing, design and administration in-country.

Since the 1990s, a gradual rise in exports has led to the actual position as an important export industry, transforming it from a domestic market based one, to an export market-driven fashion production.

During the same decade, important mergers and acquisitions has enabled the establishment of three of Denmark’s biggest fashion companies (four counting in shoes).

The group Bestseller A/S, with brands such as Vero Moda and Jack&Jones,Only, Vila, Selected, Name it, just to mention a few, is still by far the largest fashion group with a turnover of more than DKK 22 billion. It focuses mainly on mainstream and affordable everyday wear.

Number two is the group ECCO Shoes with around DKK 10 billion, IC Group at DKK 2.7 billion and DK COMPANY at DKK 2.4 billion are number three and four respectively.

The Bestseller company was founded in 1975 by the present owner and company CEO,  Anders Holch Povlsen’s parents.

The Holch Povlsen family belongs to the absolute top of Denmark’s wealthiest families and other than running a fashion Group, Anders Holch Poulsen is also a large landowner in Scotland.

Here he has acquired 12 large estates making him a larger landowner than the British Queen according to The Guardian. The Scottish estates are owned by his company Wildland Limited.

A list of the 10 wealthiest families in Denmark made by Dagens.dk places the Holch Povlsen family as the number 2 wealthiest family, however, they are largely surpassed by the absolute number one, the family Kirk Kristiansen, the owners of Lego.