What is going on with the normaly wet and cold Danish summer? 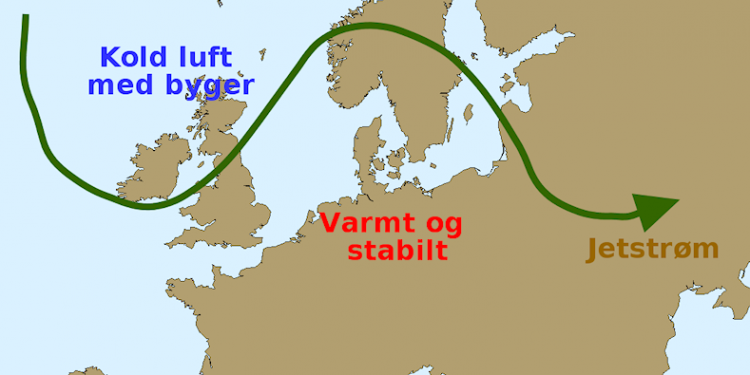 When the jetstream takes a more northern course closer to Denmark ( the green line in this picture) it blocks out the cold west wind and low pressure systems which normally dominate the Danish summer weather. Picture: DMI

The updated weather report from DMI is full of surprises – as far as they can forecast – Denmark will have high temperatures and sun. It is all due to the jetstream.

If you are new to the Danish summer, you may think all the warnings about how cold and rainy it normally is here are great exaggerations.

However, this year, the warmth and sun are brought here by the abnormal form of the jetstream.

Meteorologists at DMI call it the Greek omega from as the jetstream makes a funny bow over Scandinavia, a shape as illustrated by the sign Ω and thus effectively blocks out the low pressure systems, which normally reach Denmark from the Atlantic.

Instead warm air from southern Europe flows freely up north. Sometimes this only happens briefly – but this year the jetstream has been lying up there more or less permanently since the end of April.

In the latest forecast issued beginning of July by DMI, the sun and warmth will stay at least until the end of July with temperatures between 20 and 25 degrees Celsius and westerly winds.

The highest temperatures will be in eastern parts of Denmark and along beaches that are shielded from the western winds.

As we approach the end of July and beginning of August, weeks 29 and 30, we may even get higher temperatures as a the high pressure system may move even closer to southern Scandinavia, resulting in a regular heat wave.

For the Danish organic milk farmers the situation is serious as the lack of rain and drought means the normal delicious green pastures with grass for their cows are all dried out.

Some organic milk farmers have problems getting enough of the replacement fodder and have to slaughter some of their cows.

To Jyllands Posten, organic milk farmer Gert Aude from Tirstrup on Djursland says that he cannot get enough fodder for his 120 milk producing cows.

We have to reduce our stock to 100 cows, and therefore we have already sent several to the slaughter house. As an organic milk farmer we have to feed our cows with 60 percent roughage (Editor’s note: tough parts of grain and vegetable) and we simply cannot get hold of  enough of it.

According to Jyllands Posten, the consequences of the drought are so far an estimated loss of DKK 6 billion for Danish agriculture.

No help from above is in sight, as it will continue to be dry – no rain insight for the next many weeks.

Take note of the burning ban in vigour in all Danish municipalities and check the status for your’s here.

You can read more about what the burning ban entails in our article here.