A great rutting experience at the Copenhagen Deer Park – Dyrehaven 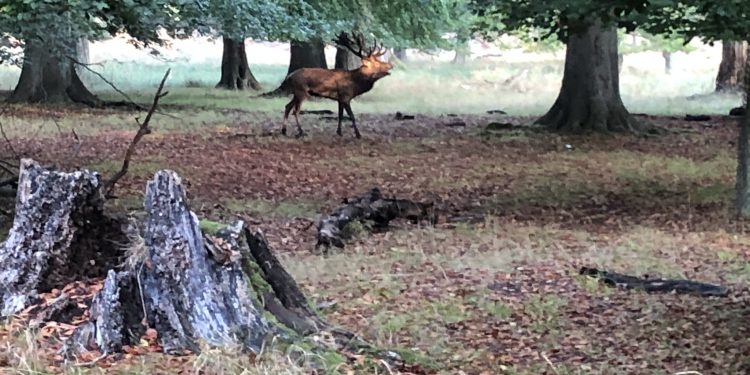 If you listen carefully, you will be able to hear the bellow of the dominant stags during the rut as they defend their females against young males who try their luck. Picture: Niels Henrik Lindegaard, early morning in Dyrehaven.

A great excursion during the autumn months it to take a walk, bicycle ride or horse carriage ride in this old, royal deer park.

You can even go on horseback if you enjoy riding,  at Fortunen’s Riding School or at Mathessons you can rent ponies and horses by the hour.

Dyrehaven and the Eremitage Hunting Castle belonged to the Royal family and in 1669 the deer were fenced in by King Frederik III  to make it  easier for him to hunt there.

Today it is a public park with more than 2,100 deer of various kinds. It is a unique site where you can get a really close look at Bambi and his parents.

The autumn and winter seasons are great to do so because the deer are fed at several sites from where the audience can get quite close (while maintaining a respectful distance).

As the deer have no natural enemies in the park and 700 fawn are born each spring every year during the winter months more than 700 deer have to be shot to keep the park at its 2,100 limit.

The tasty venison is sold to local inhabitants and restaurants. Some deer are caught and exported live to other deer parks.

The deer in Dyrehaven are considered to be world class and during the rutting season, you will find nature lovers, photographers and journalists alike flocking to get an up-close look at the male deer, the stags.

According to Naturstyrelsen, responsible for the public park, Royal stags can be seen rutting in the southern part of the park from the middle of September to the beginning of October, whereas the rutting fallow deer will usually be on the Eremitage Plain around the end of October and the beginning of November.

Keeping a distance and avoiding disturbing them is highly recommended however.

Take your bicycle with you to the deer park

You can easily take your bicycle with you on the S-train to Klampenborg Station and cycle through the park.

You will find about 300 red deer, kronhjorte in Danish. They are the biggest of all the stags.

An adult stag can weigh over 200 kilos. The coat is reddish-brown in the summer and greyish-brown in the winter. The hinds and their fawns stay mostly in the southern part of the Deer Park whereas the stags remain more to the north.

More than 1,700 fallow deer can be seen grouping together in herds as large as several hundred, usually seen on the open plains.

Their coats can be three different colours: black, white or a brownish-red, the brownish-red coats are the most common.

The deer were introduced from the Middle East and are mentioned in written sources as roaming about freely in Denmark as far back as 1231.

About 100 sikas complement the other two species. They are a little smaller than fallow deer. Their summer coat is a chestnut colour with whitish-yellow spots, whereas their winter coat is an even dark brown (females) and black (males).

This breed, which has been in the Deer Park since 1923, was introduced from Japan. Source: Naturstyrelsen