A new picture in the Danish streets – Soldiers 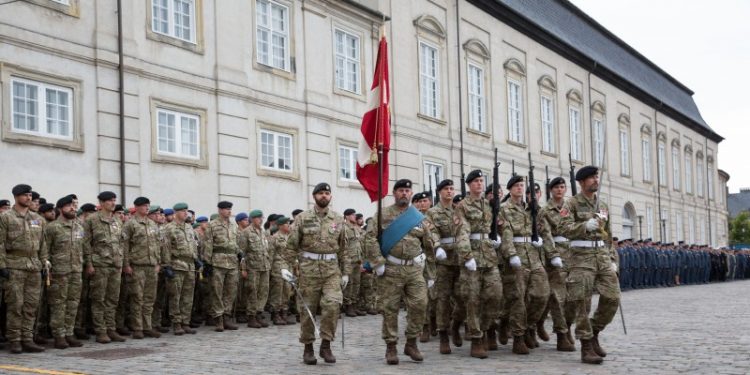 As of Friday 29 September an unusual sight in the streets of Copenhagen – soldiers on guard – not the usual colourful ones from the Queen’s guard – but more awesome looking ones in front of for instance the Jewish synagogue or other areas where the police has so far had the security and guard keeping tasks.

Danish police has been under increasing pressure due to the ongoing gang war as well as the border controls and terror related surveillance  and guard keeping tasks.

All are tasks that require a great deal of man power  and the border controls and terror related tasks are a heavy drain on police resources.

Therefore the Danish government decided in September that the Danish Defence and the Home Guarde ( Hjemmeværnet) were needed to give the police a hand.

160 soldiers have the last two weeks participated in a special civilian security and guard education program, amongst other to learn how to deal with civilians when they are on guard, and as of 29 September, they are ready to take their places.

Fifty of them are expected to help the Copenhagen Police with surveillance tasks – notably guarding Jewish institutions such as the synagogue in Krystalgade in Copenhagen.

At the press conference in September, when the new measure was announced, Danish Defence Minister, Claus Hjort Frederiksen, said that although Danes have not been used to seeing the military on guard in their streets (apart from the Queen’s), as the police and armed forces have traditionally had very separate roles, they are used to cooperating.

During their civilian guard task the soldiers will be under police command and authority he said.  A total of 128 annual police years (årsværk) are expected to be saved.