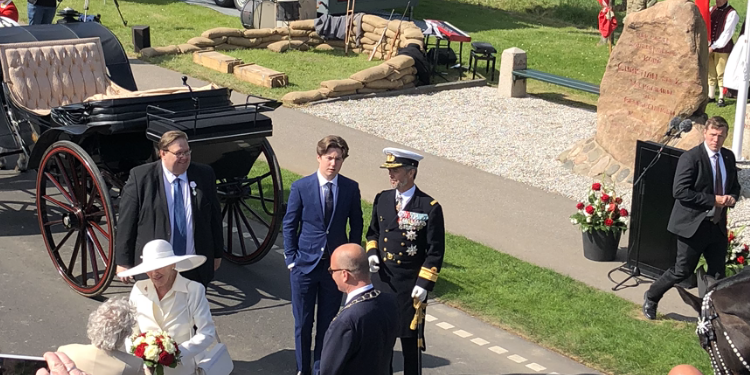 In this picture, Queen Margrethe receives a bouquet from Eli Fredskilde. She is the daughter of Johanne, who in 1920 as a young girl rode across the border together with King Christian. He had picked her up to ride with him when she presented him with flowers. The picture of King and the young child became quite symbolic at the time. Picture: Private

Postponed for a year, the celebration was marked last weekend by three generations of royals crossing the former Danish-German border again.

An important commemoration was postponed for a year due to the epidemic outbreak.

In 2020 it was 100 years since Denmark was again reunited with the territories lost to the German Empire in 1864. However, due to the epidemic, all celebrations were cancelled and instead postponed until June this year.

On the 13 June 2021 three generations of royals; The Danish Queen, Crown Prince Frederik and his son Prince Christian drove across the former border by horse carriage, a ride made in 1920 by their ancestor, King Christian X, on a white horse.

The reunification in 1920 was perhaps the most important outcome of the end of the First World War for Denmark and with Germany’s total defeat, the Danish reunification with the territories previously lost to Germany were made possible.

This happened when at the referendum held in South Jutland in the beginning of 1920 the people living in Sønderjylland and Nord Slesvig voted to return to Denmark. The possibility to vote by referendum was a direct outcome of the Versailles Treaty in 1919.

The Danes of Sønderjylland, who since 1864 had German citizenship when Denmark lost these territories to Germany, were forced to fight on the German side. A total of 30,000 were drafted and more than 5,000 died during the war.

Even today in these areas many have family members who participated in the war and who died or came back severely injured.

“The most obvious and important for Denmark is certainly the reunification of South Jutland with Denmark. This would not have been possible without such an important German defeat,” Professor Nils Arne Sørensen, from the History department of Syddansk Universitet,said to Danish newspaper Jyllands Posten.

“The Danish involvement is not something that has a great place in the Danish public memory of the First World War, at the time it was primarily linked to the soldiers from South Jutland, and later in the biographies and novels published about it during the 1920s and 1930s.”

Denmark was reunited with Sønderjylland and North Slesvig on 15 June 1920.

Flags will be flying on 15 June 2021 all over Denmark in celebration of this anniversary.