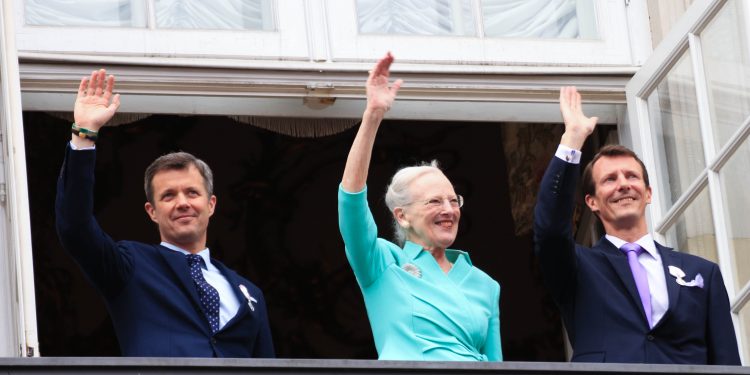 If you have time – and are curious about the Danish Royals – why not join the Danes in the celebration of the Queen on her birthday.

An old tradition, the public appearance of the Royal Family  on the balcony of Amalienborg Slot, whenever it is the monarch’s birthday.

It is an event which not only gathers the whole royal family –  it is also an occasion for the Danish royalists to greet the Queen, as they gather in front of the palace to scream HURRA for her. You won’t be alone – but the view will be OK -as they come out high above your head.

At 12:00 the royal family will make their appearance on the balcony of Christian IX’s palace at Amalienborg for the traditional cheers to the Queen. At a certain point the Queen will lead the audience in a 10 fold cheers for Denmark – so you will be shouting HURRA ten times if you decide to join in.

The Queen’s guards will be in their red uniform playing a.o.the Queen’s march.

What does the Queen actually do?
Being a constitutional monarch means that Queen Margrethe cannot independently perform political acts. Although she signs all Acts of Parliament, these only come into force when they have been countersigned by a Cabinet Minister.

Once a government has been formed the Queen formally appoints it. As the Queen is the formal Head of Government, she presides over the State Council where acts passed by the parliament are signed and officially become new laws.

This ceremony is performed according to the old tradition of a horse carriage ride to meet the Queen escorted by the mounted Guard Hussar regiment.

Does it pay off to have a royal family?
When Queen Margrethe ascended the throne in 1972, only 42 percent of Danes were in favour of keeping a monarchy. Over the years the support has steadily risen. A rise much attributed to the way the Queen has fulfilled her role.

She has amongst other things been good at representing Denmark abroad by participating in business trips and exhibition openings in connection with export campaigns for Danish businesses, thus acting as a door opener for Danish commercial interests abroad together with her late husband Prince Henrik.

At home in Denmark, the Queen has become a unifying figurehead by both performing numerous public tasks, accepting invitations to open exhibitions, attend anniversaries and her yearly cruise on the royal yacht Dannebrog has brought her out to meet ordinary Danes all over the country.

However, discussions about the cost of an increasing royal family – now with eight royal grandchildren – can be heard. So far, it has not been possible to calculate the cost-benefit, despite voices heard to try to do so.

Danish industry is adamant that the role as door opener abroad greatly benefits Danish exports and that the royal family’s presence in Denmark attracts tourists too.

The cost of having a royal family runs up – and is estimated to be around DKK 343 million, which includes the state contribution to its different members of about DKK 100 million annually.

The only official account of the cost was made in 2009, when Danish Prime Minister Lars Løkke Rasmussen presented this official amount of DKK 343 million, which apart from the DKK 100 million in state contribution, thus includes the related costs which different ministries have as well, such as the Royal Guard, the Royal Castles, State visits, round the clock surveillance by PET ( Politiets Efterretningsvæsen – the Danish “MI5 or Secret Service”), the royal yacht, stables etc.

The state contribution of DKK 100 million is used to cover the royal households’ direct cost for staff, clothing, transport, internal maintenance of their castles – heating and electricity and miscellaneous.

With a larger family to finance, Danes expect the royal family members to contribute to their own life support.

In a survey made by Megafon for Danish newspaper Politiken and TV2, it became clear that for instance Prince Joachim’s offspring (four in total) will most likely have to fend for themselves, as 66 percent of Danes agreed with the statement that they should lead a normal working life as adults.

Also, 57 percent found that Prince Joachim’s ex-wife Alexandra should no longer be on the public payroll. Since this survey was made, Alexandra has informed that when her youngest son Prince Felix turns 18, she will decline to receive her annual state contribution.

Their roles in the future
No one can, of course, predict what will happen now Queen Margrethe’s husband Prince Henrik has died, however, no one believes that the Queen will step down in favour of her soon to be 50 year old son, Crown Prince Frederik.

It would seem that most Danes want to keep their Queen. In a Megafon survey only 18 percent felt the Queen should retire now. However, 73 percent felt certain that her son is qualified to take over the throne.

The next generation of royals will have to find their own balance between keeping up Queen Margrethe’s emphasis on a more open Royal house, being visible and present in their public work, but also finding their own way.

“Frederik has to find his own way, the last thing he should do is to be king the way his mother was queen. He has already shown us more of his personality by running an iron-man and crying in the church at his wedding, so we forgive him for crossing a closed bridge (ed: his car crossed the storm closed Storebælt bridge in order for him to arrive on time at a public event). We are also getting an extremely qualified queen in the shape of Crown Princess Mary. She will be worth her weight in gold and already is.”

The Danish royal family does not posses a huge fortune – even if they look wealthy with their castles and classy cars. Find out why in our article here.

By Bente D. Knudsen            Pictures: Hisham Ammar from Queen Margrethe’s celebration of her 75th birthday together with her two sons and their families.