Coming weekend – traffic will be challenged in Copenhagen City 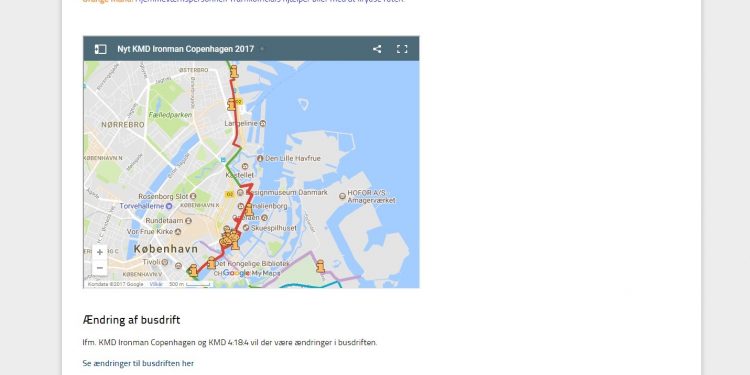 The weekend of 19 and 20 August promises to be a challenging one traffic wise. Several events will close off streets to motor traffic as well as to public transport (busses) – and some streets will also be off limits for cyclists. The reason? The Copenhagen Pride Parade and the KMD Ironman Copenhagen.

If you live in Copenhagen, or are on a visit, you need to take note of how two major events will affect the traffic and public transport in the area that you plan to travel through.

On Saturday 19th August the main public event of the Copenhagen Pride Festival, the Pride Parade, is expected to attract up to 200,000 viewers (subject to weather).

They will be following the parade of trucks decorated with boas and feathers, colourfully dressed dancers and other festive costumes as they march from Frederiksberg Town Hall along Vesterbrogade to the Copenhagen Town Hall square.

The parade will take place from 13:00 to 15:00 and during this time frame the traffic along the route will be affected.

The Copenhagen Pride Festival runs from 15 to 20 August with the aim of putting focus on the need for equality and inclusion of LGBTQ in the society. The first Copenhagen Pride Parade took place in 1996.

The event is sold out, so if you were hoping for an extra ticket to swim, run and cycle, you are too late.

However,you still need to factor in the event if you plan to move about Copenhagen and North Zealand this weekend.

The map provided by the organisation behind the event – take note the date is not correct, it says the 21 August – but it is the 20 August 2017! – shows which roads are closed and semi closed. For some reason the explanation to the map is only in Danish  – follow this link to get to the map .

Parts of Amager Strandvej will already be closed the evening of  Friday the 18th August and Saturday the 19th for the so called “motionist run”.

Both ordinary traffic – pedestrians, cars and bicycles as well as public transport (busses) will be affected.