A remote island in the Baltic Sea, 200 kilometres east of Copenhagen it is  described as the sunniest part of the country. Full of quaint fishing villages, medieval fortresses, historical white round churches, and traditional smokehouses.

A great piece of Denmark – the ISLAND of BORNHOLM seduces with its chalk-white beaches, craggy coast, impressive chalk cliffs and lovely countryside.

Add to that a singular history, several charming slow-paced towns and a pulsating artistic community, and you are your way to a very special vacation.

Having so many interesting attractions can make it hard to choose what to see on the island, so I turned for advice to Berit Hvassum, a Danish Photojournalist who has been an island resident for 10 years.

“Bornholm has quite unique sights, such as its beautiful old ruins and castles, some of which are among the best preserved in Denmark,” Berit tells me with a vivid and enthusiastic tone of voice.

In fact, the island’s most visited attraction is the formidable Hammerhus castle ruins.

Situated at the island’s northernmost point, and perched on top of the cliffs, this medieval fortification was erected by the Danish church in the 12th century and served as an important fortress during the wars in the middle-age.

Its spectacular enclave offers amazing views of the coastline and fabulous sunsets. No wonder the popular Wonderfestiwall takes place at the foot of the castle walls. In 2022, it will be from 18 to 21 August.

Another important music event prior to corona was the Allinge Jazz Festival, which took place every year in July, we are still waiting for confirmation as to what will happen in 2022 but Allinge itself is an attractive and tranquil fishing village located on the northern part of the island.

Bornholm is also famous for its medieval whitewashed round churches, which were once used as fortresses. The largest one is found in Østerlars village,it dates back to the 17th century, whereas the best-preserved round church is in Nylars.

Most tourists arrive at Rønne, the island’s capital and largest town. Its colourful old quarter, west of Store Torv, makes it ideal for a pleasant stroll, as its streets are full of interesting old buildings and local boutiques.

Some of the island’s most typical craft souvenirs, like glass, ceramics, pottery, and fine jewellery can be purchased in Rønne.

Gudhjem is perhaps the most picturesque seaside village on Bornholm. It has a distinctive rocky landscape, with dramatic cliffs and bright, sloping streets, full of little outdoor cafés, lush gardens, and half-timbered houses.

On top of that, the town is home to the magnificent Kunstmuseum, which is primarily dedicated to contemporary paintings by the Bornholm School of Artists, although it also includes works by other Danish artists.

On the east coast lies the charming maritime town of Svaneke, which has managed to maintain a consistent old-fashioned architectural style.

Thanks to its mild climate, its inhabitants can grow figs and grapes in their unusual rocky gardens.

Bornholm has been blessed with some of the nation’s top beaches. Dueodde Beach, located on the island’s southernmost tip, is the largest and busiest, and is famous for its ultra-fine white sand. Several spectacular dunes have been formed on the beach’s widest stretches and there is also a pretty lighthouse. 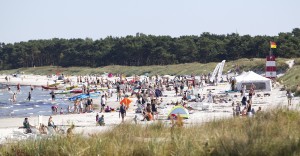 At the western end of Dueodde beach sits the top-notch Kadeau Restaurant, offering a creative and inspiring menu based on new Nordic Cuisine with an extensive wine selection.

Its splendid coastal views make it the perfect venue for a romantic evening. Reservations are highly recommended.

The island also features plenty of outdoor activities, from hiking to angling, canoeing, and biking. Its compact size makes it idyllic for cycling; as there are many well-signed cycling routes and distances are relatively small (a round trip of the entire coast is 105 just kilometres long).

It is important to remember that Bornholm’s terrain is not as flat as the rest of Denmark.

In fact, the northern coast and inland are quite hilly, but your extra efforts will be compensated with the startling views you will see alongside. Local buses also have a bike rack at the rear of the bus if you feel like taking a break.

There are many smokehouses on Bornholm, many of which still have the distinctive chimneys. Picture: Kim Wyong

A visit to Bornholm is not complete without trying the famous smoked fish in one of the numerous smokehouses, many of which still have the distinctive chimneys.

Among the most typical fish you will find is smoked herring, mackerel, and salmon.

The island also possesses a signature dish, Sun over Gudhjem, made of Bornholm-smoked herring with a raw egg yolk, radishes and chives, served on freshly baked rye bread.

The island of Bornholm has been a historical trading site for centuries. Its strategic location on the Baltic Sea has also made it disputed over by all its neighbours.

The island was invaded by Germans and Swedes in the 16th and 17th century, and by the Russians in 1945 when at the end of World War II and after a severe bombardment of Rønne and Nexø, the Russians occupied it for almost a year. This short occupation did not have a strong impact among Bornholmers.

“Most people on the island do not think very much about World War II, as people were already then living relatively independently compared to their Danish counterparts on the mainland,” explains Tot, a Copenhagener who has spent half of his life on Bornholm.

He also told me that due to Bornholm’s geographical isolation, locals have developed a distinctively strong sense of identity compared to those of other Danish islands.

“No matter how long you live in Bornholm, unless you were born or raised on the island, you will always be regarded as an outsider,” he says.

The economy of Bornhom relies on dairy farming, arts and crafts, and fishing, although the latter has been in decline since the 1980s. When Denmark joined the EU, many fishing companies shut down due to more restrictive fishing quotas.

The island had to rethink its future, which led to increased investment in tourism.

Today, tourism is an important economic source, as the island has become an attractive summer destination, especially for German and Swedish holidaymakers.

Take note that many hotels and restaurants close during the off-season (November to April), some are open in March and April during weekends, most open for Easter, however the main season starts in May.

During the Folkemøde, from 16 to 18 June 2022  most hotels and B&B’s are booked and full  long in advance – so maybe choose another time for your visit.

The island can easily be accessed by sea or air. From Copenhagen, drive across the Øresund Bridge to Ystad, in Sweden.

In Ystad you can board one of the high-speed ferries of the ferryboat company, Færgen, which only takes one hour and 20 minutes to reach Bornholm.

Alternatively, you can choose to leave from Køge, south of Copenhagen, and take the night ferry also on the Færgen line. It leaves at 00:30 and arrives at Rønne, Bornholm, at 06:00.

Another possibility is to fly from the mainland. Several DAT flights depart daily from Copenhagen airport, and during the summer holiday the airline  also operates a direct flight from Billund.

Our Danish badehotel fan, Jens-Christian Wandt recommends two on Bornholm. Melsted Badehotel located in Gudhjem and Stammershalle, located on the north side of the island in Stammershalle. Check them for their 2022 opening hours.