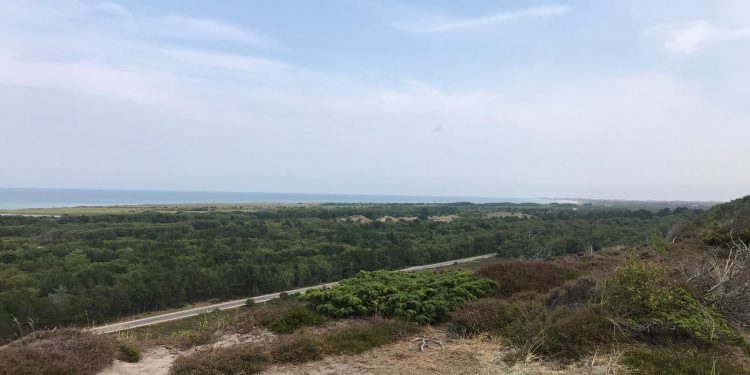 Anholt's landscape is quite special and resembles nothing typically Danish. It is dominated by large sanddunes and a desert. Picture: Niels Peter Lindegaard

Tucked neatly between Denmark and Sweden in the Kattegat Sea, the islands of Anholt and Læsø call city-weary vacationers to rest among the sandy dunes and uninterrupted summer sunsets.

Together, the islands make up the Danish desert belt, the largest in Northern Europe. It’s not a typical desert, but a lichen heath, with some 400 lichen species. Plant and animal life is diverse and plentiful.

Harbour seals make their home and raise their pups along the rocky shores. The islands also serve as an important staging area for hundreds of water birds to moult and breed each season.

Læsø
The largest of the two islands, Læsø emerged from the sea around 5,000 years ago during the Neolithic Age. The typography is diverse; the interior is filled with lakes, marshes, bogs and pine forests. More than 100 kilometres of beachfront circle the perimeter. Byrum is the island’s main town and commercial centre.

Læsø is first mentioned in Norse mythology as a feasting place for the Norse gods, the Ægir. Finds of flint tools, amber pearls and pottery from the Stone Age tell the lost tales of life among the island’s first human inhabitants.

During the middle ages, Læsø became known for its salt production, which was harvested from the largest tidal saltmarsh outside the Wadden sea. Early islanders plundered the forests for firewood to heat the salt brine and construct kilns.

This said, salt making was banned by a royal decree in the 16th century, but it would take more than 300 years until the forests were replanted. In 1991, salt production was reintroduced on Læsø as a combination of archaeological research and a municipal employment project.

Today salt production is highly organized, the forests are sustainable, and Læsø Salt is a small yet profitable company bringing the island’s history back to life. Visitors can watch as craftsmen make salt in open iron pans, explore the Salt Shop or make their own salt at one of the reconstructed seething cabins.

The beaches are the crown jewels of Læsø, and as such, the most coveted 25 kilometres are combed and tided each spring by the local troupe of schoolchildren.

Just west of Østerby harbour, Østerby beach is a popular destination close to shops and cafes, especially in the summer when the harbour is bustling with activity.

Vesterø beach stretches south of the harbour and is a favorite spot for families with young children. The water is shallow out to the third sandbank and the large dunes are perfect cover for a game of hide and seek.

Danzigmann beach, named after a Gdansk shipwreck in 1741, is the most windswept of the island’s beaches. Towering dunes line the shoreline protecting birds and other seashore creatures from angry waves.

Stretching more than five kilometres, Stokken beach promises privacy along your own patch of sand. Wade 50 metres through the water to reach the elongated sandbank. The western end of Stokken is a conservation area from 15 May to 15 July to protect the area’s bird life.

On the north coast Storedal’s sandy beach winds almost all the way to Horneks. As you travel eastward the fine sand turns rocky at Lilledal.

Danzigmand, Storedal and the area north of Vesterø Havn are prime spots to find amber, especially after a storm.

Læsø is paradise for outdoor enthusiasts. From horseback riding, fishing, surfing, kayaking or exploring the marshes and forests of the interior, there’s plenty to keep you busy.

Board and Paddle Sports
Novice surfers will enjoy riding the waves at Flaget north of the harbour at Vesterø Havn. You can also start in the very shallow water between Stokken and the beach near Sdr. Nyland where it’s impossible to drift out to sea here.

If you’re more experienced, explore the waters along Læsø’s north coast, at Storedal, Hvidebakker and Danzigmand. Bring your own board as rentals are not available.

The conditions on Læsø are ideal for sea kayaking. Beginners should choose a day with calm weather and remain in shallow water.

Fishing and Horseback Riding
Back on land, anglers cast their lines at the harbour moles in Østerby. Læsø is renowned for its fine turbot population and garfish are plentiful from May.

Explore the island’s beauty on horseback with a guide or on your own. Trips are arranged throughout the year and tailored to riders’ experience. Weekend riding tours on Icelandic horses are also available.

Culture and Wellness
If you need a respite from the sun and surf, it’s worth a visit to the island’s museum to see the roof alone! Made entirely from seaweed, the oldest section of the roof is more than 400 years old.

The Museumsgården appears today as it did in 1860. The timber used in the house is from ships that ran aground long ago.

Anholt
The quieter of the two islands, Anholt’s dry warm summers, abundant wildlife and 25 kilometres of mostly empty beaches, beckon sun worshipers and nature enthusiasts to its shores each summer.
Yachts, fishing boats and dinghies fill the harbour as the island comes to life with music and arts festivals.

There is much to explore within its 22 kilometres. Traveling on foot, bicycle or horseback is sublime due to the island’s numerous car-free zones. You can swim the six kilometre Blue Flag beaches around the island, except at the seal sanctuary at Totten.

Anholt is situated in the Kattegat sea, midway between Jutland and Sweden at the entrance to the Baltic Sea and is home to one of the five largest marine wind parks in the world. The island’s typography ranges from hilly moraine country and flat raised seabed and sand dunes.

The eastern part of the island, called Ørkenen (desert), is treeless and has never been ploughed. Traces of the original stone age topography from the end of the last ice age more than 10,000 years ago, are still visible.

Wild Anholt
Located on the Anholt’s eastern tip, the Totten Seal Sanctuary is home to more than 1,400 harbour seals and about 25 gray seals. The sanctuary opened in 1990 to protect spotted seal mothers and their pups along the beach front in breeding season.

Each spring thousands of birds including duck, wader and silver seagull gather to nest along the island shores. In April, herring gulls migrate to Anholt after spending the winter in central Africa. This beautiful and rare bird gives Anholt its distinctive character. The gull breeds in dense colonies at the foot of Sælhøjene, the grågule sand dune.

Anholt Museum and City Walks
Learn about the island’s history: the stone age, shipwrecks, the people and their culture at the Anholt museum, once home to the island’s doctor.
The museum organizes city tours every Tuesday and Thursday from 11:30 until 13:00.

Getting to Anholt and Læsø
From June to August, the islands’ human population surges from 150 residents in Anholt and 1,700 in Læsø, to more than 60,000. Just 90 minutes by ferry from Frederikshavn in North Jutland and 75 minutes from Roskilde via air taxi, the islands are perfect for a weekend getaway.

You can reach Anholt by ferry from Grenaa in about three hours. The ferry operates once a day during the week in high season from 23 June through 16 August, with two departures on Saturdays in summer.

For a faster option, take the air taxis from Roskilde or Læsø. Price in high season are approximately 2500 DKK for two.

On Anholt, you will find fresh fish, lobsters and other seafood available early in the morning from the local fishermen who sell their catch directly at the harbour front. Pictures below from Anholdt August 2021 Niels Peter Lindegaard.