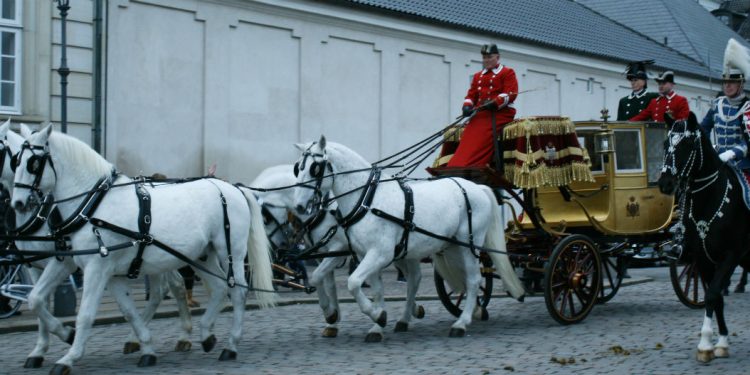 For Danish Royalists the beginning of January is a great treat. The many Nytårskure, the New Year Levees, are unique opportunities to witness the age-old traditions with beautiful horses parading the streets practising before the main event and when they escort the Queen in her Gold Coach grand tour beginning of January 2022.

Once a year, the Gold Coach is taken out of the stables and is used again as a means of transport to take the Danish Queen from her residence at Amalienborg to the finest of the New Year Levees at Christianborg Castle.

The coach dates back to 1840 and was extensively renovated a few years ago; an expensive renovation of a coach covered in 24 carat gold leaf, this was funded by the A.P. Møller foundation.

The closed horse-drawn Gold Coach transports the Queen through the streets of Copenhagen escorted by the Mounted Guard Hussar Squadron,  starting at Amalienborg Castle at about 9:00 and taking her to Christiansborg along Store Kongensgade and over Kongens Nytorv to Christiansborg.

She rides back from Christiansborg also in the Gold Coach with her mounted escort at about 13:15/ 13:30 from Sankt Jørgens Gård at Christianborg along Bredgade to Amalienborg.

The event is a great opportunity to see a beautiful parade through the streets of Copenhagen with the horse-drawn carriage accompanied by the Mounted Guard Hussar Squadron of the Guard Hussar Regiment – in Danish Gardehussarregimentets Hesteeksadron.

A total of 45 to 50 horses and Guard Hussars participate in the parade.

You can see the full route here: click here for map

The mounted squadron’s history, traditions, and uniforms can be traced back to the Hussar Regiment set up by King Frederik V on 10 February 1762 in order to have a light mobile cavalry to face the mounted Russian regiments in the impending war with Russia.

However, the Guard Hussar Regiment itself dates back to 17 November 1614 when Christian IV set up a national militia of 4,000 soldiers.

The regiment in its full blue gala uniform, combined with the gleaming harness of the horses and the accompanying music, is quite a unique site to behold. Only three other countries in Europe, Holland, Sweden and England, still have mounted royal horse guards.

The full mounted escort is also used for other occasions such as royal weddings, anniversaries and when the Danish Queen is on tour of Denmark with the royal yacht.

At such occasions she is usually escorted around the towns she visits by the mounted escort. In 2020, they will also escort her through the streets of Copenhagen when she celebrates her 80th birthday on 16 April.

A smaller escort is used for the official reception of new ambassadors, which takes place a couple of times a year.

Don’t miss the occasion to see the Danish one while living in Denmark.

If you have the day off around the 30 December 2021, or have guests visiting, you will find the mounted escort on their rehearsal tour in the streets of Copenhagen, which usually takes place around 13:00.

The horses and Guard Hussars will arrive on the 29 December and take up “residence” at their horse hotel at the stables at Christiansborg Castle.

During the days they are in Copenhagen, it can be fun to visit the area and experience the hectic “horse activity” taking place.

Usually The Royal Stables close for visits while they are in town. If you want to visit them during that period, check before going to see if they are open for visits.