“I define myself according to how much I have overcome,” says Zindzi Mandela in this interview with Your Danish Life 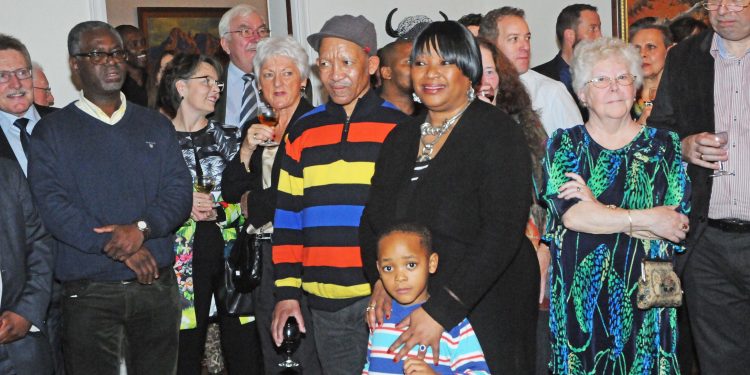 Zindzi Mandela talks about her role as the South African Ambassador in Denmark and reflects on her upbringing memories as Madiba’s daughter. The interview was first published in the 2016 spring/summer issue.

“It may sound cruel, but I haven’t missed home yet,” explains Zindzi Mandela at the South African Embassy in Copenhagen.

The 57-year-old arrived in Denmark in 2015 to take up the ambassadorial post.

“Here I have a sense of distance, perspective, and focus,” she tells me. “Not just in terms of my mandate here as ambassador but because I can think about me and do things I have always wanted to.”

You can understand why Zindzi might need some space and time to reflect. It is more than two years ( Editor’s note: now four years) since the death of her father, Nelson Mandela. While the world publicly mourned his passing, his daughter admits she is yet to find closure.

“It’s like we have gone back to when he was in prison… it’s like he’s just away,” she says. “I have not had a proper chance to process the grief and I don’t know what it’s going to take or when it’s going to happen. I just hope that whilst I am here (in Denmark) I will be able to deal with a lot of emotions that I have suppressed.”

Zindziswa Mandela has spent a lifetime suppressing emotions. Between the ages of 18 months and 29 years old, she rarely saw her father who was jailed under the apartheid regime. He spent the majority of his prison sentences on the notorious Robben Island. It was not until she was 15 that she was even allowed to see him. During those half hour visits, no physical contact was permitted.

Her life with her mother, Winnie, Nelson Mandela’s second wife, was chaotic. Due to regular police harassment, Winnie sent both her daughters away to boarding school.

But when they would arrive back home to see her, she had often been arrested. Like so many other black children in the townships, Zindzi witnessed much violence from a young age.

But it was her mum who told her that she should “never feel sorry for yourself” and that there was “no excuse to cry”.

When Nelson Mandela was finally released from prison, Zindzi says it took her time to adjust.

“It took me a while to get used to a father when you had never had one your entire life,” she tells me, matter-of-factly. His release from prison also caused her other problems.

Although she had been politically active since school, it wasn’t until she was 19 years old that she was officially recruited to MK, the military wing of the ANC. There she was trained to use weapons, but denies she can strip an AK47 in 38 seconds – a claim made by her mother.

She won’t tell me whether she was forced to kill saying only “every war has its casualties”.

But the ambassador says she was regularly harassed by the apartheid government. From the age of 16 she was often locked up by the police for days, even weeks at a time.

Following Mandela’s lead, she too embraced reconciliation, even campaigning alongside him during South Africa’s first democratic elections in 1994. Their relationship grew stronger.

“I had moments when I sat down with him and told him how angry I was with him as a child – how I felt he let down my mum. And I had that dialogue and I am so grateful I did. It was the greatest gift I could have given myself and him. And I guess that’s why we were so close.”

As we sit chatting over coffee in a very functional room in the South African Embassy in Hellerup, in the Copenhagen suburbs, Zindzi’s former life seems a world away.

While she’s friendly and full of laughter there is a seriousness about her. It’s not hard to understand why. Even more recent events have been far from kind to the daughter of Madiba.

“That’s when I discovered that there is no truth to the statement that time heals,” she tells me of her death, which happened on the eve of the South African World Cup. “You just learn to live with the pain.”

Her own daughter, Zoleka, has battled drug and alcohol addiction as well as cancer. Although she has two sons with her here in Denmark, she is currently living away from her partner who is still working in South Africa. But it’s the future she’s focusing on, not the past.

“I like to define myself not according to what I have suffered but according to how much I have overcome,” Zindzi stresses. “And I am very grateful to my mother for instilling that in both me and my sister… I never see a glass half empty but I see it half full.”

It’s obviously been a big decision to leave her mother, Winnie, behind in South Africa. After the difficult times that they experienced together, the two are naturally close.

“Everybody thought she might have separation anxiety but she has always been my biggest cheerleader saying you never do anything for yourself and you just have to do it now.”

Winnie Mandela is often criticised for being too pro-violence and working against peace. But Zindzi is the first to defend the 79-year-old.

“She was confronting the system and she was never afraid of danger or turning people away. She fought for everyone.”

The ambassador to Denmark is not without her critics either. There are those who still feel uncomfortable about the role she played in her country’s armed struggle. Others assume it is her name that got her the job here.

“That’s naïve,” she argues, “because I have been a political activist since childhood. I have worked for the liberation of my people and I think I have enough credentials to be positioned as someone who can represent a country and a democracy that I have actually sacrificed for.”

So what does this diplomat want to achieve during her time in Denmark? On a personal level, she hopes to write her life story as well as paint a series of seascapes. On a professional level increased trade between Denmark and South Africa is high up the list. In particular, she wants her homeland to discover how it too can benefit from promoting blue and green economies.

She uses pig farming as one example in which South African farmers can learn from their Danish counterparts – using the whole animal from nose to tail to provide not just meat but waste for bio-gas. Culturally, too, she is determined to improve South Africa’s profile in Denmark.

And then there’s Mandela Day. Now officially recognised by the UN, this day of volunteering in July to honour her father, is dedicated to freedom, justice and service to others. While it was just a small event in Denmark when it was started in 2015, Zindzi is determined it will grow.

The political appointee may claim she doesn’t want to officially enter politics, but she will do all she can to use her name and influence to keep Nelson Mandela’s spirit alive.

So what does she think he would make of her new role?