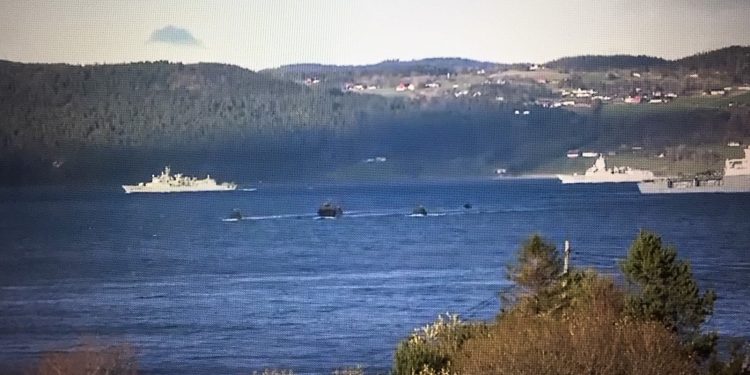 Amidst the seriousness of NATO’s largest military exercise since the cold war, today’s news in Denmark’s local radio station P3 was the event of Iceland being laid dry for beer. The reason? The past weekend’s stopover of more than 6,000 American troops in Reykjavik on their lay over in the city before heading for Norway.

The local Icelandic news site, Visir, reported that the brewery Olgerdin Egill Skallagrimsson, which makes the country’s most popular beer, Gull, had to make use of their emergency beer stock in order to supply the empty beer taps in the city’s bars.

Local beers were preferred over imports and the Americans were willing to sample craft brews as well as the standard lagers, Visir reported.

Maybe the fact that the local beers are less expensive than imports, contributed to this, however prices are still high, at DKK 85 for a glass of 50 cl. They will find beer expensive in Norway too.

In Denmark, you might have seen amongst other the British military vehicles on the Funen highway some weeks ago, as they were passing through Funen on their way north to join the NATO forces in Lillehammer.

Also, at several points in Jutland military transports have been observed the past weeks.

Exercise Trident Juncture is a huge logistical undertaking. Since August ships of equipment and personnel have arrived at 27 different locations across Norway, from as far away as California.

>The article continues below.

A total of 50,000 soldiers from 29 NATO allies plus Nordic partners Finland and Sweden participate in the exercise running until 7 November 2018.

Around 250 aircraft, 65 vessels and up to 10,000 vehicles in total have made the trip to central and eastern Norway.

Here the surrounding areas of the North Atlantic and the Baltic Sea, including Iceland and the airspace of Finland and Sweden, will comprise the geographic scope of the exercise happening in the air, on land and at sea.

Named the Trident Juncture it is the largest military exercise put together by NATO since the collapse of the Soviet Union and the East bloc threat to NATO and it will test NATO’s ability to restore the sovereignty of an Ally after an act of armed aggression.

Trident Juncture sends a clear message, to our nations and to any potential adversary: NATO does not seek confrontation, but we stand ready to defend all Allies against any threat,” General Secretary Stoltenberg said at a press conference held earlier in October.

NATO member Denmark participates with 1,300 soldiers from all three forces (air, land and sea) and has deployed the support ship, Esben Snarre, who in the second half of 2018 is command ship in one of NATO’s two marine fleet forces.

At a press conference in Norway held during the distinguished visitors’ day 30 October in Byneset, Norway, near Trondheim with the participation of amongst other Secretary General Stoltenberg, NATO explained the scope and aim of the exercise officially starting tomorrow 31 October.

The aim is to ensure that NATO forces are trained, able to operate together, and ready to respond to any threat from any direction.

The exercise will also test and certify the NATO Response Force for 2019, led by Germany next year with the participation of Norway, the Netherlands and Italy.

“The scenario for Trident Juncture is that a NATO Ally – in this case, Norway – has been attacked by a fictitious adversary. Our task is to defend Norway and to drive back enemy forces. Trident Juncture will show our ability to reinforce an Ally in need. With troops and equipment travelling long distances from Europe and North America,” Stoltenberg said at today’s press conference.

All members of the Organisation for Security and Cooperation in Europe have been invited to send observers to the exercise.