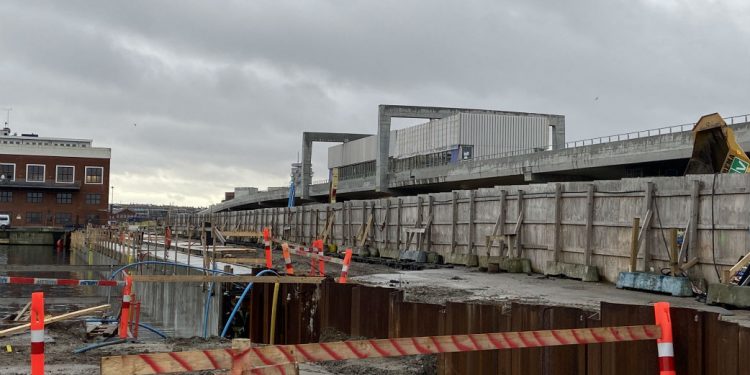 Now is the race to get everything above ground ready as well to open the two new metro stations on Nordhavn and Orientkaj. The new stations will be above ground. Picture: Susanne Kee

For those working, living or studying in the new Nordhavn district, the addition of two metro stations to their area should improve their commute to it.

The M3 line was closed from 12 to 26 January 2020 to be able to test run the M4 line as the metro lines M3 and M4 will be running on one mutual steering system, with common trains and tracks on the stretch Østerport, Marmorkirken, Kongens Nytorv, Gammel Strand, Rådhuspladsen and Copenhagen Main Station.

With the  succesful completion of the test run, now is the race to get everything above ground ready as well to open the two new metro stations on Nordhavn and Orientkaj.

The metro passengers travelling from Østerport to Copenhagen Main station will gain as well.

This is because the M4 metro line will run on parts of the M3 circuit deserving the same stations; Østerport, Marmorkirken, Kongens Nytorv, Gammel Strand, Rådhuspladsen and Copenhagen Main Station, increasing the number of departures between these stations, for instance during rush hour, there will only be a minute and a half between trains.

The M4 metro line is scheduled to open only on the stretch running to Nordhavn as the full line will not open until 2024.

From 2024, the M4 line will continue from Copenhagen Main station to Sydhavnen, adding another five stations and thus completing the building of Copenhagen City’s four metro lines.

When the metro stations in Sydhavn open, the southern part of Copenhagen will be connected to the metro system, and an even stronger public transport network will be created, hopefully contributing to reducing congestion and increasing mobility.

The metro extension to Sydhavn was approved by the Danish Parliament in February 2015.  The extension will be 4.5 km long and consist of new stations from Fisketorvet to Ny Ellebjerg.

The new stations will be situated at Fisketorvet,  Enghave Brygge, Sluseholmen,  Mozarts Plads and at Ny Ellebjerg.