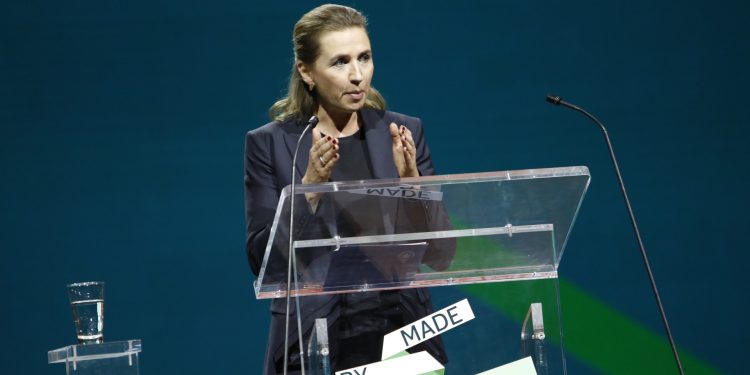 Danish Prime Minister, Mette Frederiksen, also spoke about Brexit at the annual meeting of Dansk Industri on 17 September. The main topic of the meeting was climate change and the transformations of Danish businesses to be more green, amongst other the ambitious plan to reduce CO2 emissions by 70 percent in 2030. Picture: DI/ Thomas Arnbo.

As a no deal Brexit scenario is becoming increasingly more likely, the Danish government informs of the ongoing preparations in order to prepare Danish businesses for the outcome of Britain leaving the EU without a deal.

Danish Prime Minister, Mette Frederiksen, broached the issue when she spoke at the annual meeting of the industry association, Dansk Industri (DI), on September 17th, saying that:

“ The UK will leave the EU, with or without a deal, and from my perspective, this is very sad. 30 years after the fall of the Berlin Wall in 1989, we are beginning to build new ones.
Brexit will be a huge task, with or without a deal. We need to speed up the preparations, especially for the small and medium sized businesses. The Danish Government asks all businesses to let us know if you find large obstacles in the Brexit preparation phase so that we can try to solve them together.”

Particularly the small and medium sized businesses are of concern, as they often do not have the resources, or have set aside the needed time and resources to deal with a scenario of more administration and paperwork, tariffs and new trade barriers; an outcome of Britain leaving the EU.

For instance, Danish food businesses, who import animal based food items, need to have their import products controlled at the Danish border by a veterinary , who has to have been notified prior to the arrival of the exact time of such products’ arrival at the predefined border.

This is just one of the measures in place for imports from so-called third party countries, which the UK becomes once it is no longer part of the EU.

Danish businesses have always looked outside of the Danish borders for trade, and the UK has for many years constituted an important trading partner.

The UK is Denmark’s fourth largest export market, with trade between the two countries representing a value of around DKK 160 billion and a share of Danish export of 10 percent.

Almost 800 Danish businesses have subsidiaries in the UK, where they employ 100,000 people, and according to Denmark’s statistics, 45,000 Danish jobs are linked to trade with the UK.

These figures were all presented by the Editor in chief of Jyllands Posten, Steen Rosenbak, when he in a commentary in August declared that the political chaos of Brexit would hit Denmark’s businesses hard, and therefore, an extension of the Brexit deadline would be very much in Denmark’s interest.

The consequences of a no-deal Brexit for Denmark are taken seriously by the Danish Government, a seriousness which was reflected today at a press conference where three concerned ministers presented the Danish Government’s worst deal scenario efforts. One of them is a ministerial task force, covering the three most concerned ministries: Foreign Office, Trade and Tax.

Another is stressing that each individual business must set aside the resources necessary to prepare for a no-deal Brexit scenario.

The Danish trade and business associations, Dansk Erhverv and Dansk Industri, have already been preparing for a while, and every effort to help small and medium sized Danish businesses, members of their trade associations, in the Brexit provision process has been voiced.