The King of bread – Rugbrød 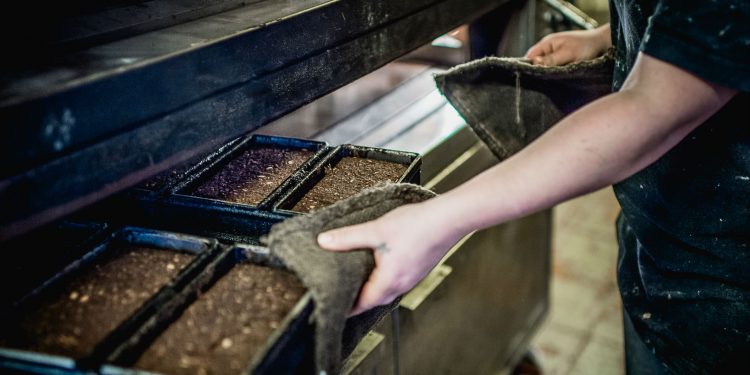 To foreigners perhaps the strangest Danish bread is the rugbrød – rye bread. The dark, compact, whole grain brick that takes some time to chew (and even longer to digest), is the oldest bread in Denmark.

For centuries, rugbrød has played an important role in Danish food culture.

Rye was the most commonly used grain for bread until the beginning of the 20th century. In rugbrød all parts of the grain are used.

Besides providing the body with energy, the grain also contains lots of vitamins, minerals and fibres, which makes the bread very nutritious and keeps the digestion going.

Have some bark and hay!
Back in the old days, when times were tough and there was not enough rye, the Vikings used to grind bark and hay and add this to the dough. It dramatically decreased the nutritional value but was filling and kept the digestive system busy for a while with the indigestible ingredients.

Luckily, we don’t have to do this today, even though some Nyt Nordisk Køkken (New Nordic Kitchen) enthusiasts would probably find it appealing.

The king of the lunch box
By the late 19th century, industrialisation was in full swing in Denmark.

Before this time, it was customary for people to eat a hot meal at home during the long lunch break. In contrast, the industrialised workforce stayed at the factory during the break and ate a madpakke, cold food packed in a lunch box brought from home.

The square, sliced rugbrød with different toppings called pålæg was perfect for this purpose.

For the next 100 years, rugbrød was the king of the lunch box and today rugbrød is still considered to be the healthiest and best choice for lunch.

Smørrebrød and traditional luncheons
Even though rugbrød is mostly used for everyday “good, healthy, and satiating” fuel for the human engine, there are times when rugbrød is part of a more luxurious meal.

The Danish Smørrebrød tradition goes back to the same period in which lunch boxes were introduced.

At that time, the restaurants that had previously served hot meals at noon began selling smørrebrød, open rugbrød sandwiches with highly piled toppings, to people who hadn’t brought a lunch box from home.

Find here a few tips for making your own smørrebrød.

Smørrebrød usually consists of rugbrød with butter or duck fat, layers of sliced cold meat, pickles, sauces, vegetables, fresh herbs and so on.

Rugbrød also plays an important part in traditional luncheons, where it is served with various delicious, warm toppings.

Unfortunately, the consumption of rugbrød has been dropping steadily in recent decades and lighter, less nutritious types of bread are taking over.

These days you will find a range of different kinds of rugbrød at your local bakery, some have added nuts, honey or other grains, making it lighter to each and sometime sweeter.

Velbekomme as the Danes say.