They will be blossoming anytime now: the magnificent Japanese cherry trees 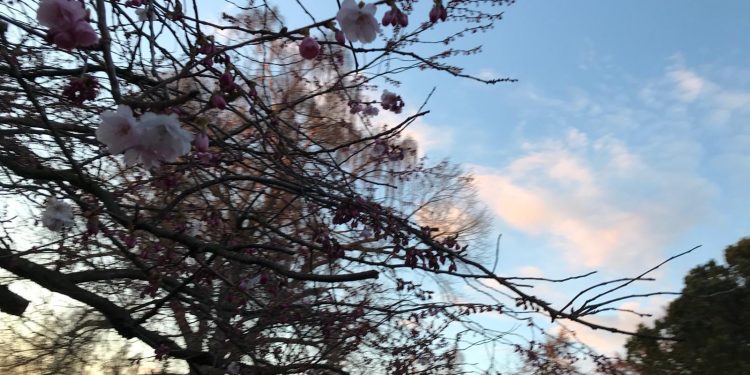 This picture is from the 15 April 2021, the flowers are just beginning to blossom. With the coming many days of sun and warmth they will soon be in full blossom. Picture: Niels Peter Lindegaard.

The buds are getting larger by the minute and with the sun and warmth arriving they will soon be out.  It is a special sight; the boulevard of magnificent pink cherry trees.

By Bente D. Knudsen      Picture: Hisham Ammar (cover picture with tree in full bloom from a past year)

They are a very short-lived joy; they only stay on for a few weeks, sometimes less if there is much wind and heavy rain.

You will find the pink flowers on Japanese cherry trees around in the gardens of old villas from the 1920s and 1930s in Copenhagen, Frederiksberg, Hellerup, Charlottenlund, parts of Aarhus and Odense too.

Apparently they are too pink to be “real” Japanese cherry trees, however, in Denmark, they are known as Japanske Kirsebærtæer.

If you do not feel like cycling around, peeping over hedges or climbing fences to see them, take advantage of some of the public places where they are in abundance.

The most spectacular sight is the cherry tree “boulevard” of the old cemetery on Bispebjerg.

It has become extremely popular to go, around 150,000 visitors visit the site during normal years in.

This year, due to the epidmeic, the area is fenced in and only possible to visit after standing in line to get in, the cemetery officials want to avoid crowds as well as having to restrict attendance completely as was done in April 2020.

A good tip would be to go during weekdays and early evenings to avoid standing in line to long.

Public access is from 7:00 until 22:00. The municipality asks the public to respect that it is NOT a park but a cemetery and picnic’s and blankets do not belong on tombstones.

The trees in blossom are worth it though, as the many visitors seem to confirm.

So maybe take an evening ride to Bispebjerg Kirkegaard after the next days of sunshine to seem them in full bloom.

Less awesome, as there are fewer trees, is the sight in Kongens Have in the midst of Copenhagen, but not less beautiful of course, or in the Frederiksberg small public park just off Falconer Alle called Hostrups Have.

Another good place to go is the park at Langelinie called Kirsebærlunden.

This park consists of 200 so-called real Japanese cherry trees, which were a donation to the city of Copenhagen from the Japanese Consul, Seiichi Takaki, in celebration of H.C. Andersen’s 200th birthday.

The Andersen Bakery was founded in 1959 by the then president Shunsuke Takaki after a visit to Europe and a life-changing encounter with Danish pastries!

The flowers are not as pink as the ones normally found in Denmark, at Langeline they have a much less bright pink colour.

Normally at Langlinie there is at the end of April a cherry tree festival, a colourful and spectacular event, The Sakura Festival. Hopefully in 2022 it will be possible to arrange the event again.

If you have no idea what to expect from a Sakura Festival then enjoy our picture reportage, courtesy of our photographer Hisham Ammar from a past festival  in our article from the 2019 festival here.