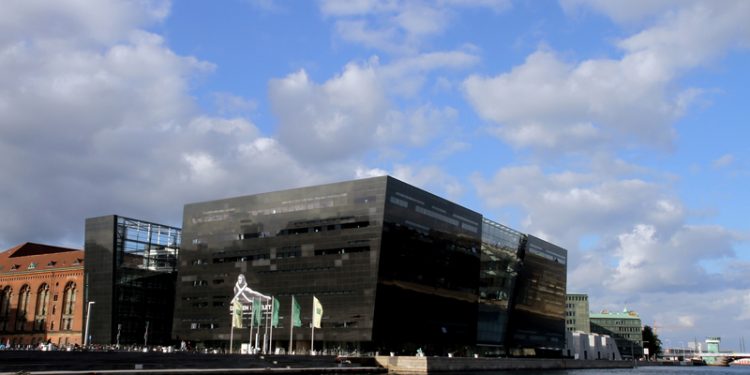 If you have not yet been to the Black Diamond, then make sure to go! It is an architectural masterpiece to be admired from the water but also from within as our expat writer found out.

Black diamonds symbolize authority and power and have the ability to endure severe weather and external conditions.

The diamonds’ metaphysical properties are said to be able to open doors to the spiritual world for those seeking the truth.

The Royal Danish Library is located in a building called the Black Diamond. Here old meets new in a knowledge seeker’s dream world.

Situated in the heart of Copenhagen, right on the waterfront, the Black Diamond, built in 1999, is an architectural masterpiece.

Walking into the structure your eyes immediately go up in amazement at the glass facade held up by iron girders. No slope is the same, so every angle has an impressive view.

Suspended balconies seemly float within the seven-story building. The ceiling of the bridge, connecting the old and the new libraries, is adorned by the Danish artist Per Kirkeby, fittingly named after him.

There are four elements that make up The Black Diamond, water, earth, air and fire.

The element of water is represented in the liquid continuity of the extension.

The air is represented in the open space atrium that opens upwards into the sky.

The last element, fire, is represented in how all the load bearing constructions of the Black Diamond are made with safety and security in mind, withstanding the up to 1,000 degrees centigrade of heat a fire can generate.

A visit to this fantastic library is like no other. Not only is there a restaurant, cafe and lovely shop, the Dronningesalen concert and theatre hall seats 600, and is the setting for talks and live entertainment.

There are on-going exhibitions to enjoy year-round.
Currently “The Camera and Us” presents a selection of works from the photography collections of The Royal Library, which contain several million images. The theme is the human being as a motif and the exhibition asks what photography does to our perception of ourselves and our conceptions of each other.

Later in 2022 iconic photographer Lee Miller’s pictures will be exhibited, a total of 100 pieces from 1919 t0 1964, amongst other great portaits of Man Ray, Pablo Picasso, Dora Maar and of Miller herself. The exhibitions is made possible in a cooperation between the Lee Miller Archive, United Kingdom and ONO arte contemporanea, Italy.

A bit of history
In 1993, the Ministry of Culture decided to expand the academic cultural image of Denmark, and therefore a competition was announced for the architectural community to extend The Royal Danish Library. The original library buildings, built in 1906 by Hans J. Holm and named the Old Library Cathedral are located opposite of Christiansborg Slot. The new and old buildings were to be connected.

There were 179 candidates in total and Jytte Hilden, the Minister of Culture at the time, along with a committee of architects, chose Danish architects Schmidt Hammer Lassen K/S as the designer.

The new building was given its name by Jytte Hilden, who when she saw the model, said “it looks like a black diamond”.

The name proved fitting, because it is square like a diamond, and when the sun shines at the right height onto the water in the canal in front, the reflection mirrored onto the facade causes the Black Diamond to sparkle.

This Royal library is the largest in the Nordic countries and serves as the national library of Denmark and as the university library of the University of Copenhagen.

The staff, made up of many university students, is extremely friendly and helpful. Not only helpful but knowledgeable and eager to share the history of the Black Diamond.

Staff member Kristian Ebstrup Jacobsen said it best.” The purpose of the Black Diamond was to update the Danish image of learning to become a more open academic society.”

The Black Diamond, which celebrates its twenty years in 2019, has been continually accomplishing its mission and is sure to continue for years to come.